What’s in a Name?

In the 1870 map below, a public house (P.H.) is shown at the corner of Newcastle St and Wharf Rd. This was the Newcastle Arms, built by William Cubitt as part of his Cubitt Town development, and opened in 1853.

At the end of the 19th century, the Newcastle Arms was advertised as one of the most comfortable public houses on the Island, with a fine selection of beverages. Yet there remains very little information about the pub’s early years, nothing of note seems to have happened there at all. Probably, the pub was not a great success, aimed as it was – like other large pubs in Cubitt Town – at ‘a better class of patron’. Cubitt built a number of larger houses for the middle-class residents and merchants he hoped to attract.  But they didn’t come: the Island was noisy, dirty and smelly. This, combined with the 1870s banking crisis, meant that many houses remained empty (or rented to local workers, up to 6 families to a house), and large parts of Cubitt Town stayed undeveloped and run-down well into the 20th century. Until WWII, the Island was noted for having virtually no middle class residents.

In an 1880 trial at the Old Bailey, landlord John Delves stated “I have a deposit account with the Richard Green Permanent Building Society; I have here my deposit-book, which was supplied to me on opening the account—on 1st July, 1878, I paid 50l. to Thomas Allen at my own house; he was clerk and cashier to the society”. The landlord had known and trusted Allen for years, but the money didn’t make its way into the building society’s accounts. Allen was found guilty and sentenced to seven years’ penal servitude.

In a 1912 Old Bailey trial, horsekeeper George Godsell “ordered three-ha’porth of rum and a penny screw of shag; he put down a 2s. piece”. Barman Leonard Rickard didn’t trust the coin, tested it, found it to be bad and sent for the police. At his trial, Godsell claimed he couldn’t remember the incident because he was “in drink”. The arresting police officer said that he searched Godsell and found no other counterfeit coins about him. The judge decided he might not have known that the coin was counterfeit, and he was found not guilty of this offence. Unfortunately for Godsell, in separate indictments, barmen from the Pier Tavern and the Robert Burns testified that he ordered the same rum and tobacco in their pubs, also paying with a counterfeit florin. For these offences he was found guilty and sentenced to six months’ hard labour.

“The Pub with no Beer”

By the late 1950s, the pub was generally quiet during the week, but livened up at weekends. “Friday nights was the boys night out in the Newcastle, it was always packed with live music,always had our best gear on,  always met up there on the Saturday before heading off to a party somewhere,” remembers John Fairweather. And according to Brian Smith, “I remember going to the Newcastle Arms every Friday, Saturday and Sunday nights around 1960. On these evenings the pub was always full with youngsters all enjoying some good fun and good music.”

Cathy Holmes’ aunt Pauline behind the bar c1960. Cathy’s grandparents Walter and Elizabeth Dunn were the landlord and landlady around 1950. Elizabeth eventually ran the pub alone,  with nine kids and Cathy’s mother pulling pints from the age of 12

Despite the busy weekends, the Newcastle Arms was also referred to as ‘the pub with no beer’ around 1960 when landlord George Langton had insufficient funds to place an order with the brewery after his generous habit of buying all the rounds for friends in other pubs.

Things were to change though, and change a lot, when writer and broadcaster Dan Farson became licensee in 1962. Farson (1927-1997)  was the son of American journalist James Negley Farson (prior to WWII, Dan had accompanied his father on an assignment to Germany and was patted on the head by Adolf Hitler, who thought he looked like a ‘good Aryan boy’). In his 1997 obituary by the Independent newspaper, the opening paragraph summed him up as, “Mythomaniacal, egotistical, and often unable to tell the truth or the difference between it and fiction –  the character of Daniel Farson – photographer, writer, and drunk .”

He was inspired to run his own pub, and create within it an old style music hall atmosphere, after making a documentary for Rediffusion about East End pub entertainment, at a time when he was living 92 Narrow St in Limehouse. He was fascinated by the local characters and pub culture (in addition to the sexual possibilities offered by visiting sailors). 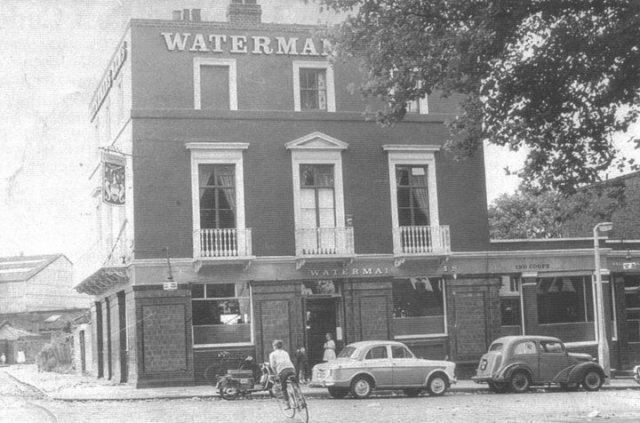 Using an inheritance from his parents, Farson purchased the pub and set about making major changes. He started by renaming the pub Waterman’s Arms, to the consternation of some locals, and hired a husband and wife team to carry out the day-to-day management of the pub. 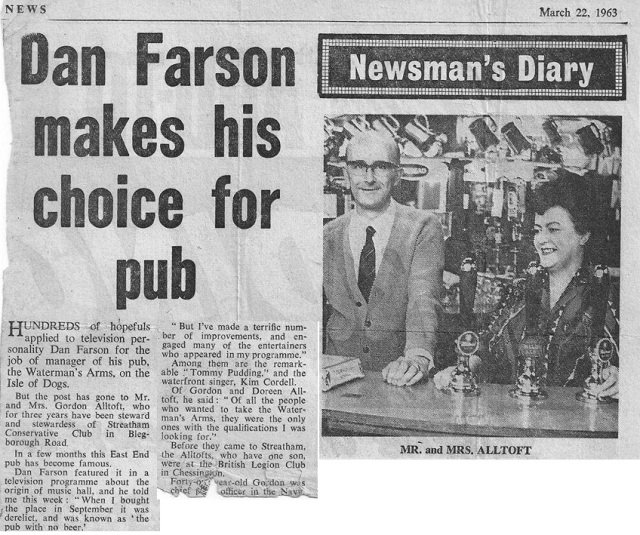 After a major revamp, including creation of a plushly-decorated stage with a painted backdrop showing the Royal Naval College in Greenwich as viewed from Island Gardens a couple of hundred yards up Saunders Ness Rd, the Waterman’s Arms was ready to do business. It was a hit from the start – with well-known performers appearing on stage, and the rich and famous making their way along Manchester Rd to see and be seen.  Locals at the time recalled seeing Clint Eastwood, Francis Bacon (a good friend of Farson’s), Brian Epstein, journalist Nancy Spain, Judy Garland, Shirley Bassey, and many others.

In a short film made at the time, it’s not easy to distinguish between those whose day job is working in the docks or in a West End theatre.

TV programmes were also recorded in the pub – most notably ITVs “The Entertainers”, a program sharing Farson’s aim to create an old Music Hall atmosphere. Unfortunately the audience tended to be too rowdy for the TV producers, and even the presence of a policeman on guard didn’t help. After just a few episodes, the producers decided to recreate the pub in the more controllable confines of a TV studio.

Photo of – and courtesy of – Roger Mitchell 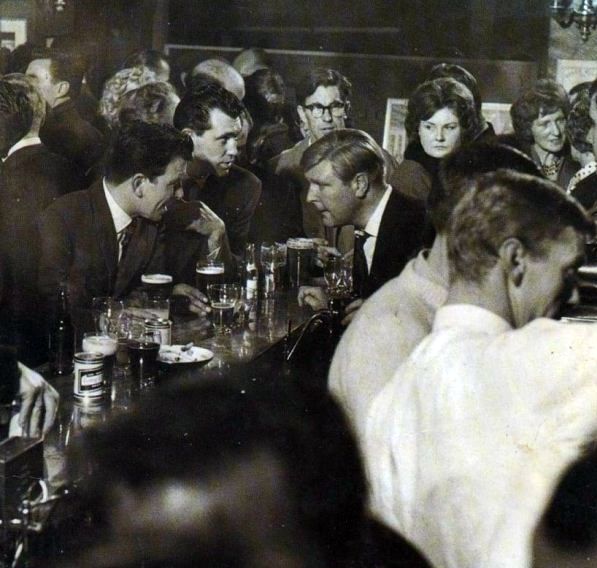 Regular performers and “Farson find”, Karl King and the Vendettas.

Carl (his real name) recently posted on YouTube a live 1964 recording made in the pub: Eddie Cochran’s “C’mon Everybody”, including the very apt lyrics, Well we’ll really have a party but we gotta put a guard outside.

Dan Farson’s residence in the Waterman’s Arms lasted only a couple of years, until 1964. There were reports of financial difficulties, unsurprising considering the cost of the redecoration and such well-known performers. And also the likelihood that protection money was paid to certain gentlemen. In Farson’s own words, “One of the more bizarre aspects of my life is the way it has veered from triumph to disaster without my seeming to notice the change.”

After Farson’s departure, the pub returned to its former state: large, slightly run down and occupied only by locals during the week. However, some life persisted – until the early 1970s the pub would have live entertainment in the weekend and would be packed with visitors from off the Island. It was not uncommon for organized coach tours to turn up, spilling their excited and chattering passengers into the pub. Visitors arriving by car would be accosted by local kids offering to “Wash your car mate?”. Washed with cold water from a standing tap, a dirty old sponge and washing up liquid, the cars ended up not much cleaner than when they started. But on leaving the pub later in the evening, car owners tended to be myopic and generous tippers. 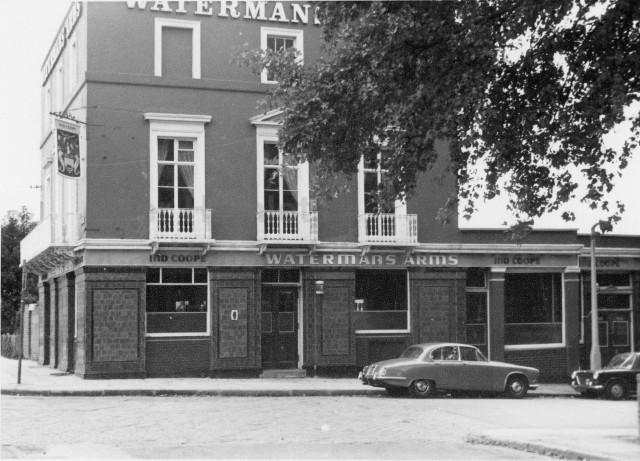 Photo courtesy of Alex Panter whose late father Mick Panter was the drummer in The Levity Lancers. 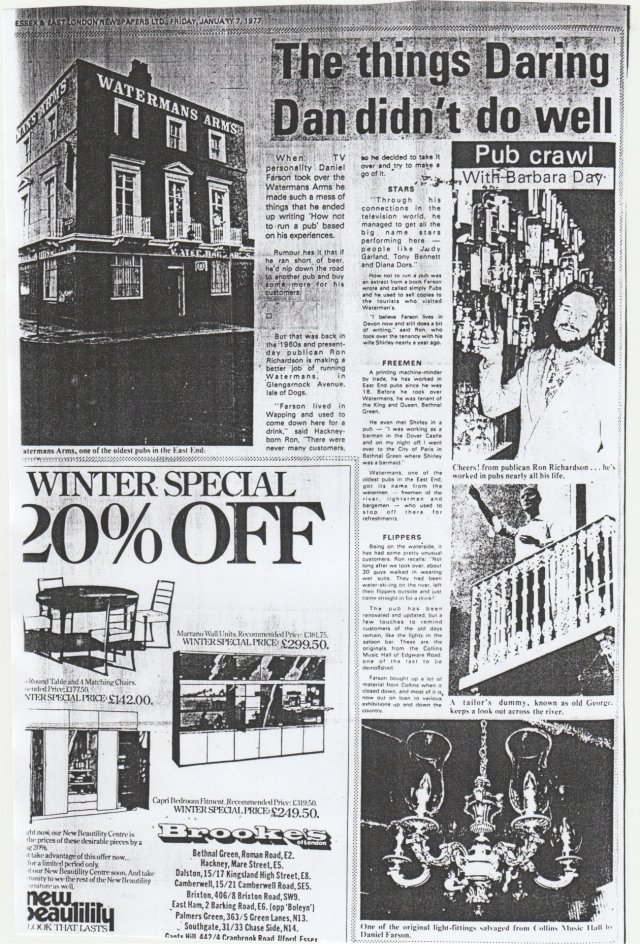 By the mid-1970s, though, the pub could no longer reckon on its recent glory to pull in the punters. Even the weekends were not that lively any more. This was the time of the 3-day week, power cuts, and general economic difficulties. Industry and dock activity on the Island was winding down, and unemployment, poverty and dereliction were on the increase. The Island was not an interesting place for outsiders any more. Strippers and drag artists were the order of the day in the Waterman’s Arms.

This was a period when I spent a lot of time in the Waterman’s Arms (looking back, it seems like I was in there every night, but then again I have a terrible and selective memory). I took this photo then – a few of “the lads” playing pool in the top bar in the late 1970’s. Coincidentally, “Gary”, the tallest on the left, is the grandson of former landlord George Langton mentioned above.

The Waterman’s Arms became a popular location for film and television, used as the backdrop for The Long Good Friday, Prospects, The Professionals and others. 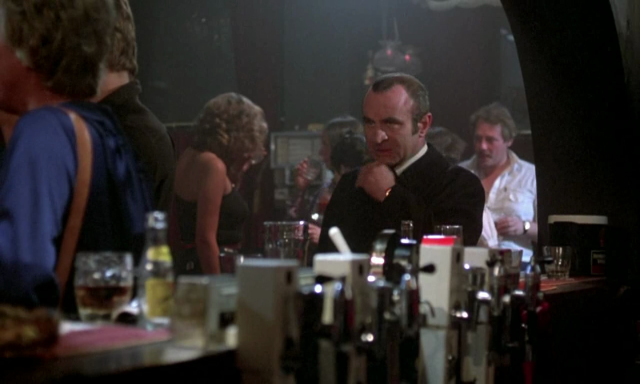 By the turn of the Millennium, the Waterman’s Arms was struggling. In 2011 the pub was closed, and the brewery owners were looking for someone to run it. 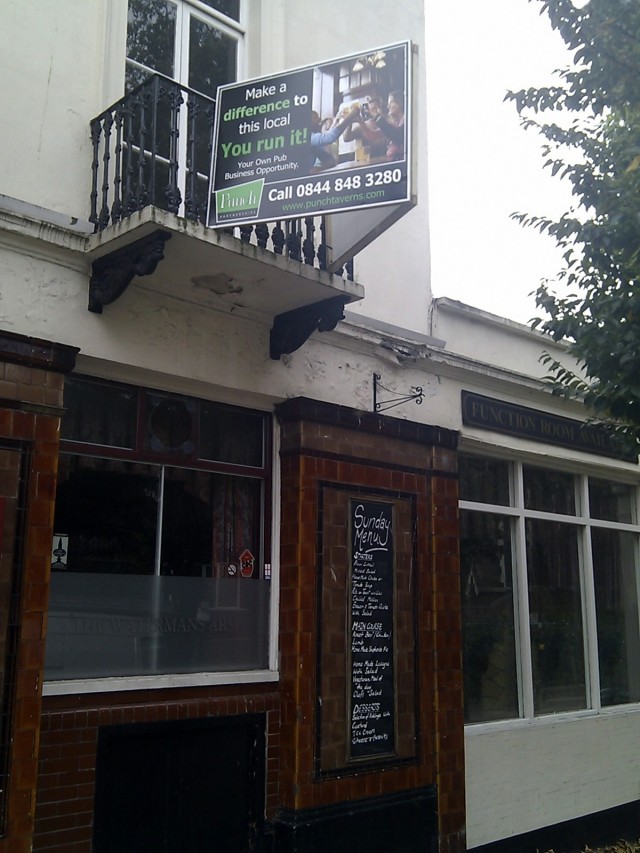 New landlords were found, and they converted into a pub and backpacker’s hotel. They also renamed the pub to The Great Eastern (not to be confused with the Great Eastern pub that was present on West Ferry Rd when the famous ship of the same name was being built) . 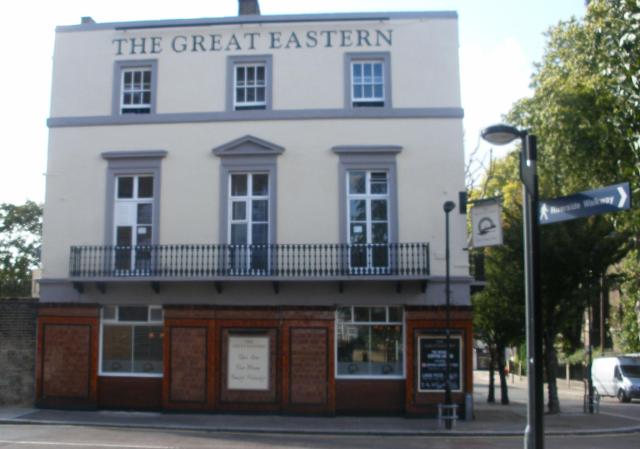 At the time of writing of the first version of this post, I’d heard that the pub’s running costs (including substantial brewery rents) were too high to support the number of customers. Since then, new owners have taken over and are redecorating and redeveloping the pub. They plan to open it with its previous name, The Waterman’s Arms.