The History of Canary Wharf

The northernmost of the West India Docks was the Import Dock. It was one of the largest docks, but its curved walls (curved below the water surface, that is) prevented ships with deep draughts from mooring alongside. With ever increasing ship sizes, this was a problem as early as the late 1900s.

The dock company’s solution was to build ‘false’ quays, made of timber, which extended out from the stone quaysides. These false quays had to be continually enlarged to keep up with ship sizes and, in 1937, a 580ft-long false quay was built at the west end of the Import Dock’s south quay. It was named Canary Wharf. 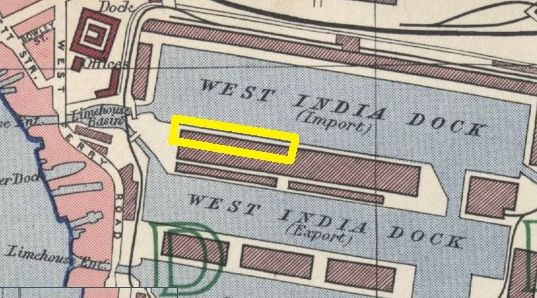 The wharf was given this name at the request of Fruit Lines Ltd, subsidiary of the Norwegian Fred. Olsen & Co, because it was leased by them for the unloading of their ships bringing fruit from the Canary Islands. (An interesting coincidence – well-known but worth repeating – is that the Canary Islands are named from the Latin Islas Canarias, which in English is Islands of the Dogs.)

This photo shows the construction of their first shed on Canary Wharf in 1937: 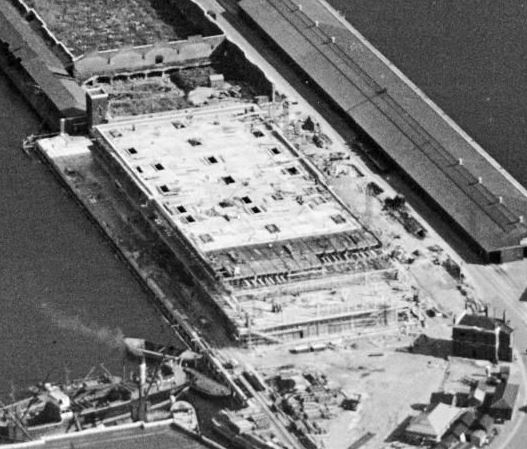 A specialism of the company at the time was the import of bananas. This photo shows bananas being loaded onto a train in a transit shed, one of which is visible in the previous photo – the rail tracks can be seen entering the opening in the end of the shed. The warehouse itself had two storeys, the ground floor was for transit and the upper floor for storage. It was just over 430 ft long, designed to be longer than a typical 10,000 ton ship. 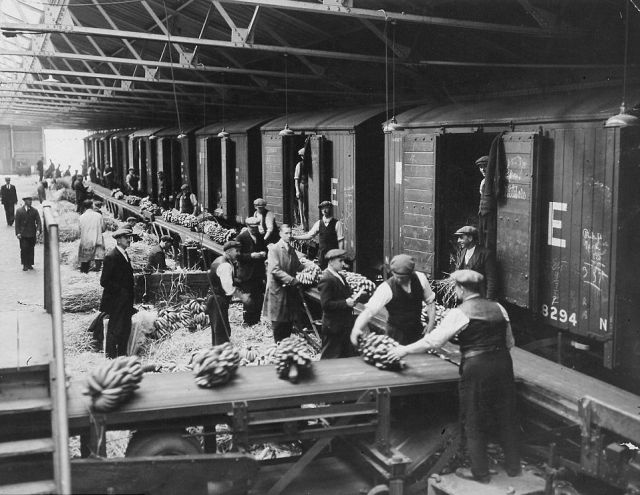 The following image is a still from the PLA-produced 1960s documentary film “The Vital Link”. This beautiful film, along with a few other films from the PLA, is available on the highly-recommended DVD named Waters of Time. I found my own version via Amazon. 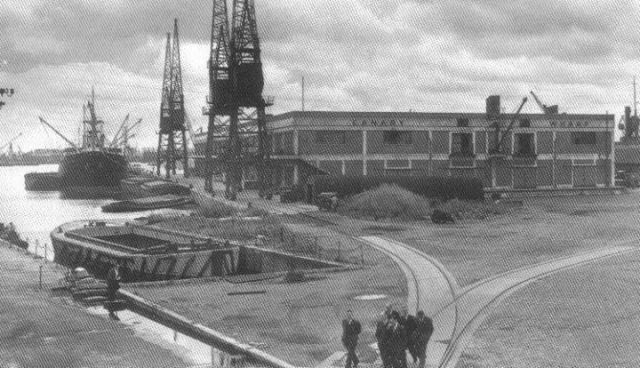 In 1952, a second warehouse was built further east, past Canary Wharf, on the site of the Rum Quay.  This warehouse was of a particularly innovative design, employing terracing for ease of cargo off-loading. The Canary Wharf false quay method was extended to take in the new warehouse, as can be seen in this figure. 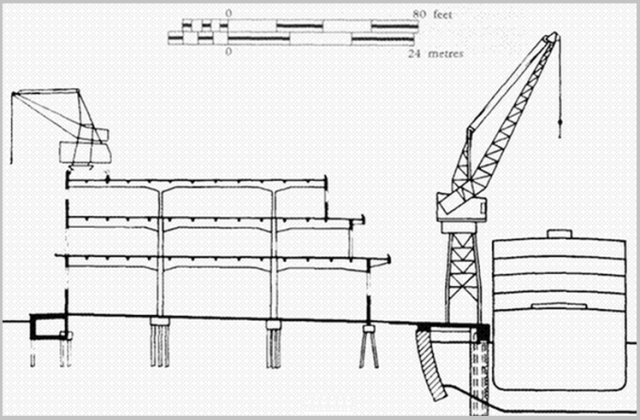 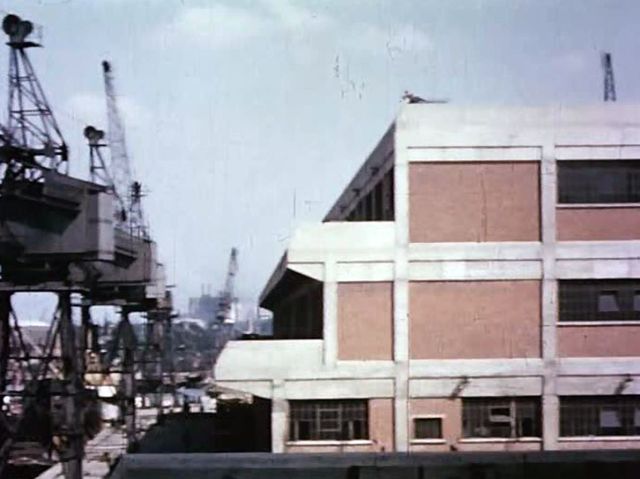 1960s. Another film still from ‘The Vital Link”

In 1976 the Import Dock ceased to be used for shipping, and both warehouses were mothballed. The official closure of the docks in 1982 made that a permanent arrangement for the Canary Wharf warehouse – it was never used again, except as occasional backdrop for a TV program recording. 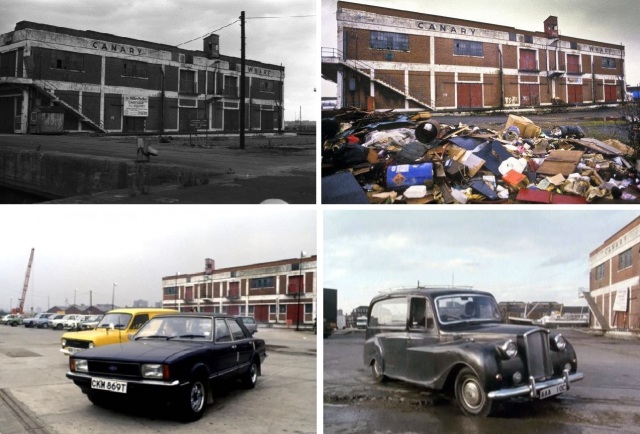 Lower two images are stills from the ‘Prospects’ TV series.

This unspectacular old warehouse was demolished in 1989 after being sold to Olympia & York for a mere £25 million in 1988. 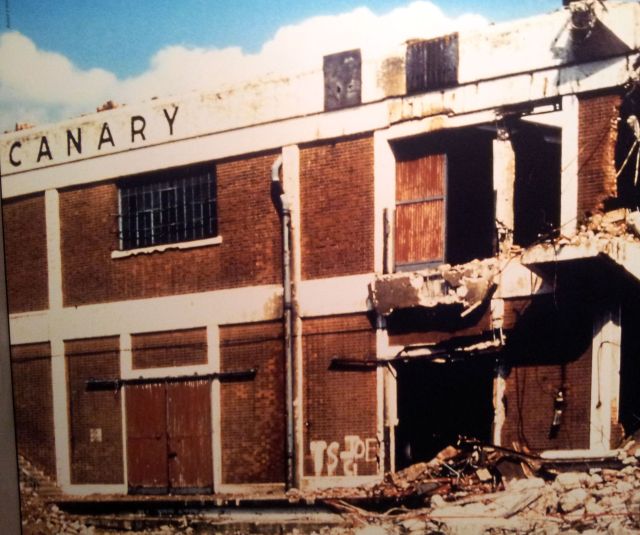 The warehouse on the former Rum Quay fared a little better, and lasted a little longer, as it was converted into TV studios (‘Limehouse Studios’) – its solid, concrete construction being particularly suited to such usage. However, before then, it did suffer the ignominy of being cut in two to make room for a the new Docklands Light Railway. 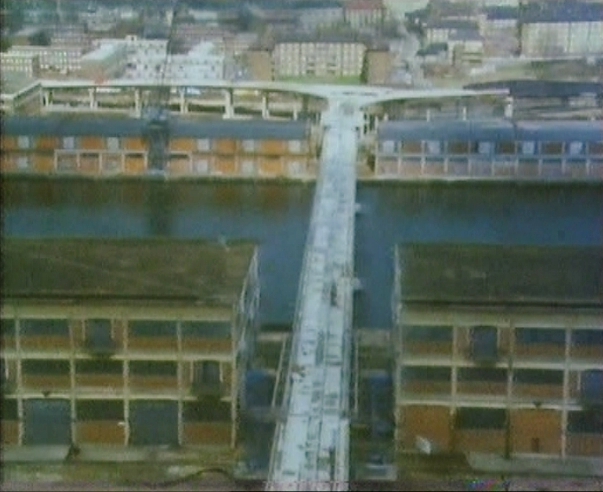 Limehouse Studios were successful and produced groundbreaking programs. According to http://www.tvstudiohistory.co.uk:

The government was very keen to see new businesses set up here so it seemed ideal. Famous architect Sir Terry Farrell was engaged and he came up with an ingenious and attractive plan. He had just completed the conversion of a Henley’s garage into the new TV-am studios in Camden so he certainly understood what was required. The original technical report was carried out by Sir James Redmond (ex Chief Eng of the BBC).

In fact, the studios occupied only half of the building. It was hoped that the right hand half would be occupied by other small companies working in the television industry so forming that most ghastly of expressions – a ‘media centre’. In fact, probably the only company to take up residence was Spitting Image Productions. However, they occupied an upper floor in the eastern (studio) half of the building where they set up their puppet factory. The empty western half of the building was used for films and pop videos, including Derek Jarman’s Caravaggio and Queen’s I Want To Break Free.

The ground floor was also used as the location for a play – God’s Chosen Car Park – whilst the top floor became well known on Channel 4 as the home of Network 7.

Alan Gilbey remembers running a drama workshop in the building:

In the 1980’s I was community drama worker at the Island Arts Centre, a council under funded facility based in three rooms above the Tiller Road swimming pool on the Isle Of Dogs. My brief, as an East Ender with no drama training, was to run drama workshops with people exactly like me, and for a decade I did, doing some of the worst and very best work of my career.

My mission was to encourage confidence and craft in first time performers and produce popular new theatre that was more than the Agatha Christies of most ‘amateur dramatics’. We had no grants, lights, sound or transport, but sometimes we achieved great things, touring local pubs and community centre with shows we
devised together.

These were transitional times. The Island, a loop of council estates around a rotting core of disused docks was just getting its first glimpse of the London Docklands Development Corporation and wasn’t happy with what it saw. This all powerful government quango had the power to defy all planning permissions in its pursuit of ‘regeneration’, and seemed almost like a cult, with its creepy crow mascots and bizarre terminology.

The LDDC talked about ‘translating the urban mode’ and put down red brick roads so they could traverse their domain in style. They turned the centre of the island into a ‘Zone’ and started to build a robot railway. They also listened to a lot of Kraftwork.

The performer of Woof! Community Theatre (for that was what we were called ) turned all of this into a short show, ‘Something In The City’, a series of surreal images inspired by the brave new world of the LDDC. It was odd and funny and struck a chord, so we decided it might be the basis of something bigger.

Two years later we were in an abandoned [No. 10] warehouse on Canary Wharf doing something bigger.

‘A View Of The River’ has a cast of sixty local people and resembled little in mainstream theatre (imagine a pageant crossed with performance art and a panto and that’s a little bit like it.) It was a parade of scenes and images, songs and resonances from the Island’s history, and a lament for its future.

We laid a river of broken glass across the floor of the vast warehouse. We involved local school children and surly teenagers too. We did everything ourselves with no money and only finished the script the day before the opening night. When we completed the dress rehearsal (at midnight) and saw all the bits in the right order for the very first time no one could quite believe how strange and powerful the thing we had made had become.

The actual performances were so emotionally charged people in the audience cried during the final song every night. Then the run finished and the demolition men moved in to clear the way for the Canary Wharf towers.

Two years later we performed a new version of the show at a real theatre with real lights and sound, but without the big images (or the illegal live fire effects!) It was good and got great reviews in real newspapers but it wasn’t the same. Our hearts were back in Canary Wharf listening to a mournful cello echoing across an empty warehouse floor.

Apparently the studios signed a 200 year lease in 1983, but within a handful of years the London Docklands Development Corporation issued a compulsory purchase order, forcing the studios to negotiate a sale with Olympia & York. And so the demolition started.

Strictly, the TV studios were on Rum Quay, and not on Canary Wharf, but Canary Wharf has become a catch-all for all the new development in the former West India Docks. Estate agents even like to say that the houses they’re selling are in Canary Wharf, instead of the geographically correct (and presumably to them, less attractive-sounding) Millwall or Poplar or wherever.

4 Responses to The History of Canary Wharf