For the Convenience of the Public

The public toilets on Manchester Rd, next to the railway arches, are well known to Islanders. 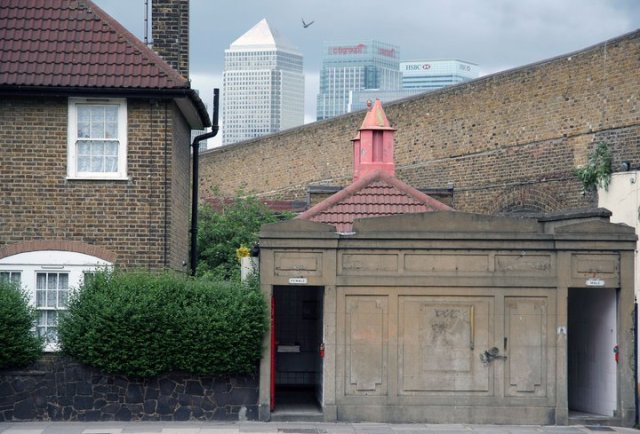 They weren’t present at the end of the 1800s. Between 1886 and 1890 this area was the location of one of Millwall FC’s grounds, but the team had moved to the Millwall Athletic Ground near The George by the time of this 1895 map:.

Earlier in the 20th century the land is fenced off, and the garage under the arches is making its humble beginnings, but still no sign of the toilets. 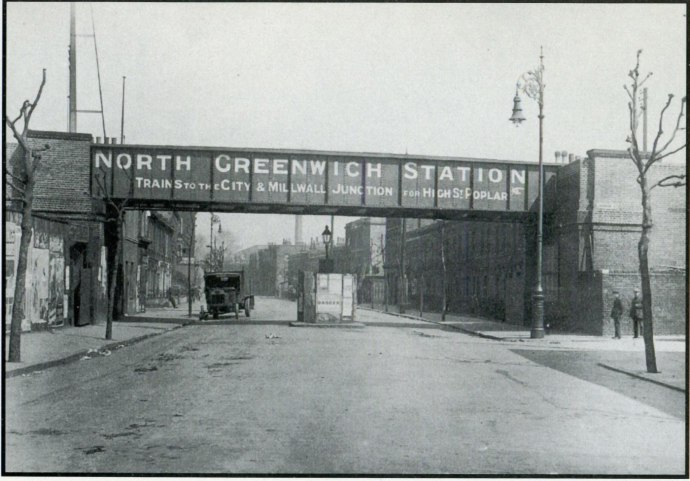 It was 1925 before they were built by Poplar Metropolitan Borough Council as part of the borough’s Manchester Grove Estate. This was one of a number of Garden City style cottage estates built on the Isle of Dogs following the end of World War I.

According to English Heritage:

This single-storey building is of pre-cast concrete panel construction with a hipped clay tile roof with two conical metal ventilators. The street elevation has panelled decoration and separate entrances for the male and female toilets at either side of the elevation. The two entrances and the panelled central section each have a shallow pediment. The MALE and FEMALE metal signs over the entrances may be original. The interior has modern fittings and tiling although the original timber roof structure survives. 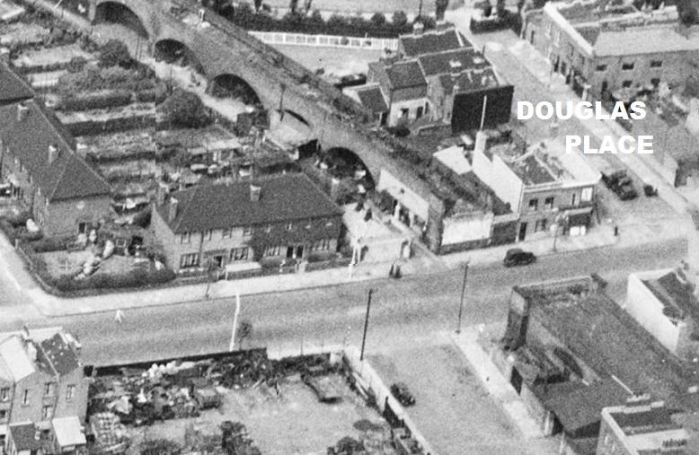 I could not find any photos of the interior of the toilets (strange that, nobody wandering into the toilets to take photos), but many exterior photos have been taken over the years. 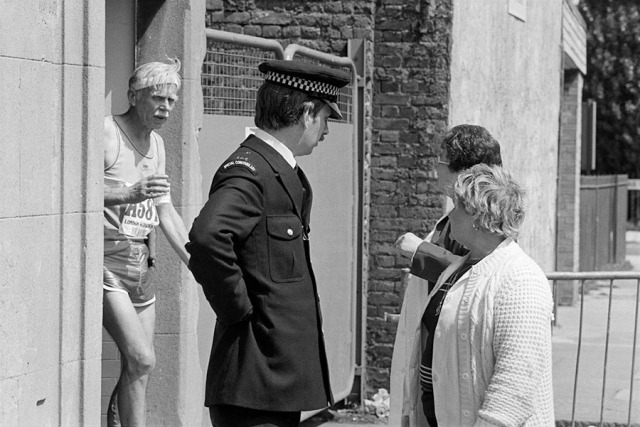 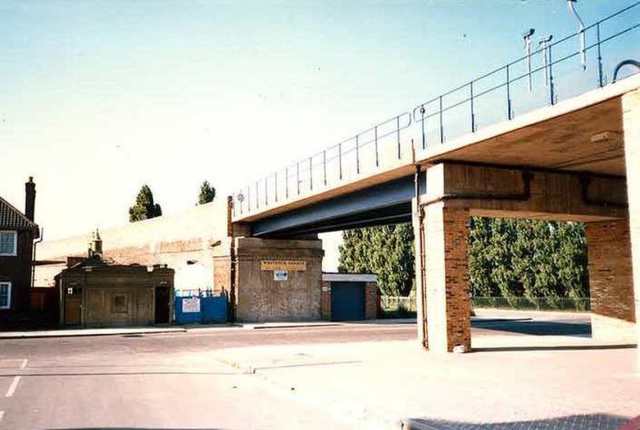 Worth noting just to the East of the railway bridge, on the north side of Manchester Road, is a small concrete ladies’ and gents’ public convenience with pitched roof and large iron ventilators on top.

The toilets eventually closed down, and were left locked and unused for years. 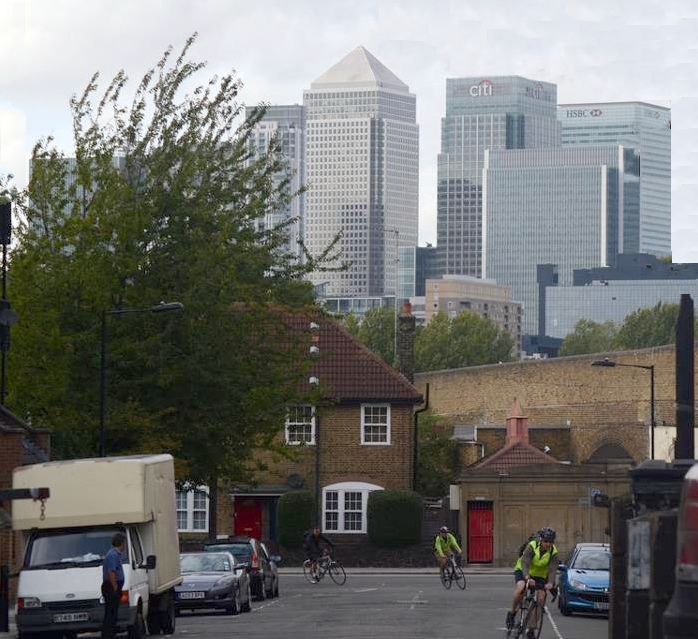 When the rumours started that the toilets were about to be sold, demolished or redeveloped in some way, Islanders began to voice their concerns at the loss of “their toilets”.

But, why worry about small and unremarkable public toilets? The building was not pretty, the toilets had not been used for years, and they were only occasionally used when open (shame they were never open after pub closing time….).

I think the possible loss of the toilets should be seen in the wider context. In the last 30 years, Islanders have seen so much of the Island demolished and redeveloped – and so many new buildings constructed – that it has become imperative to fight every last remaining square inch, before nothing remains.

It doesn’t matter if it’s not attractive. Islanders don’t miss the old Island because it was attractive – it was drab and industrial in many places. It’s because it is one of the few reminders of what was once home.

Attempts were even made in 2012 to get the toilet building listed, in order to protect it. But English Heritage did not consider that there was anything special about the building that it should be preserved. Their judgment:

CRITERIA/ASSESSMENT The English Heritage Listing Selection Guide for Utilities and Communication Structures (April 2011) sets out the criteria for assessing public conveniences. It states that early public conveniences may warrant protection where there is high-quality design, distinctive group value or technical innovation. Early tiled interiors and fittings are also of interest. C20 conveniences will rarely fulfil designation criteria except in the case of rarities such as the ornate pre-cast concrete urinal of 1919 on St Crispin Street, Norwich. The majority of the approximately 35 purpose-built public conveniences or urinals listed in their own right are late-C19 or early-C20 cast-iron examples. A number of public toilets from the 1920s and 1930s have been listed including those at Queen Victoria Square, Hull; Bruce Grove, LB Haringey; Wilton Way, LB Hackney and Old Steine, Brighton. All except the last, listed for the architectural interest of its International style design, have good surviving interiors.

The following factors are of relevance in assessing the building for designation:

* Architectural interest: this is a relatively plain example of a public convenience with only modest architectural treatment. * Materials: the use of pre-cast concrete is of some interest but it was by no means innovative by this date having been introduced as a building material by William Lascelles in 1875. The Norwich example quoted above is of slightly earlier date and believed to be the earliest surviving concrete public convenience in England. It also has a much greater degree of design interest; * Alteration: although the exterior is largely unaltered, the interior has been completely modernised with the exception of the exposed timber roof structure.

CONCLUSION While of local interest as a component of the Manchester Grove Estate, the public convenience on Manchester Road, Isle of Dogs, does not meet the criteria for listing.

Judging from this very recent photograph, the rumours of redevelopment were not unfounded. 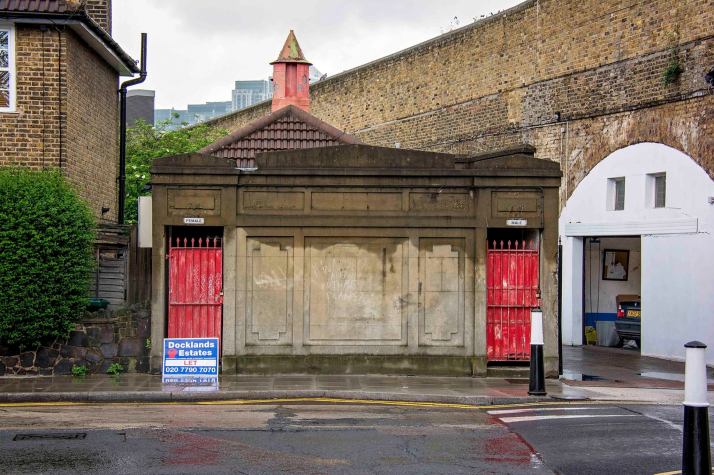 I wonder what they could possibly turn that into? For sure, whatever it becomes, it won’t be bog standard! (Sorry about that.)

Postscript: Right after publishing this article, Gloria Thienel informed me of the following about the sign:

I know who left the sign there to make a point to Eastend Homes, the now owners . These were given to them by LBTH on the stock transfer of estates in 2006. To make the point that the every spare bit of EEH lands is being built on for profit by Telford Homes

A few months ago, I managed to poke my camera over the locked door (the Gents, of course) and take these photos… 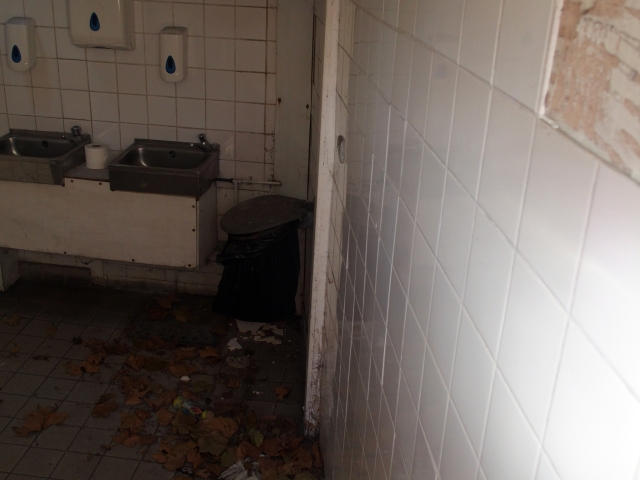 Lorraine also broefly mentioned the plans for the building.

6 Responses to For the Convenience of the Public