This is what St. Luke’s church looked like early this morning (14th October 2014), in a photo taken by Peter Wright.

It’s just a question of cleaning up the rubble now, and work can start on building the newest incarnation of the church.

The first St. Luke’s church (which was also a school) was on the west side of West Ferry Rd, the later location of St. Luke’s School, and now the location of a restaurant and supermarket. The school’s old memorial stones has been mounted on the wall here, and the zebra crossing at this spot was originally placed for the schoolchildren).

Built in 1865 to serve the Anglican district chapelry of St Luke, the first building was meant to be temporary; and, as it was made from iron, it was known locally as the iron church. Apparently they were not so unusual in Victorian times – this is an iron church in Lancashire.

No photo exists of the St Luke’s iron church, unfortunately, but it is clearly marked on maps of the time.

In 1873, a permanent church and vicarage were built on Strafford St, on ground given by Lord Strafford and Lady Margaret Charteris. The congregation moved there, while the school remained on West Ferry Rd (also in new premises, built by the same firm that built the vicarage).

A drawing of time shows how the church was expected to look (however, the small tower on the right would never be built).

It was also visible in the background of this photo of SS Endurance being refitted in Regent Dry Dock for Shackelton’s 1914 Antarctic expedition. The photo shows also a row of houses on West Ferry Rd, and Byng St centre left.

St Luke’s was damaged during the Second World War. People who lived in the area in the 1950s do not recall there being too much visible damage, but evidently the damage was bad enough to require church services to be held in a side-chapel. Jim Charnley made this drawing in 1950, showing some dilapidation. The wall, with its recognizable pyramid-shaped pillar-tops (I’m sure there’s a proper architectural name for them), survived the later demolition.

B. M. Nash painted a similar view around the same time.

At the same time, a new chapel was built. In the early 1960s documentary, Portrait of Queenie, Queenie Watts walks around her old haunts on the Island, including a stroll down Havannah St past the recently-opened church.

Like all churches on the Island, St. Luke’s also played an important social role. In this 1980s photo, mothers are talking on Havannah St outside the toddler’s playgroup in the church hall.

Peter Wright took these photos of the church and vicarage  in the mid-1990s.

Disaster struck when the vicarage was destroyed by fire in 2009. At the time there were discussions about what should be done with the building, with interest from property developers to redevelop the land. Unsurprisingly, there were rumours that the fire was started deliberately.

The space left after the remains of the vicarage had been cleared….

The church not long after the vicarage fire….

By now, it was  becoming apparent that the church itself was no longer fit for its purpose. In the words of the St. Luke’s fundraising appeal:

Sometimes it takes a long time for the scars of the past to heal. St Luke’s Church, Miilwall (in the Isle of Dogs) was bombed out during the Second World War. Since then the community has carried on with a make-shift chapel, tacked on to the church hall. This was never meant to be a permanent solution. The whole complex is nearly derelict, and the many areas of flat roof all leak in the rain.

The plan was to raise enough funds to build a new church, community centre and six homes. Enough money was raised for the new-build, and at the end of September 2014 the church was fenced off in preparation for stripping and demolition.

The previous photo was taken by Peter Wright, who regularly visited the church in the following days in order to take photos of the progress.

1st October 2014. The demise of one of the pyramid-shaped pillar-top thingies.

According to the demolition workers, the war memorial was so firmly fixed in place it took them longer than expected to remove it (it is being moved to Christ Church).

I am not aware when the construction will start proper, but I bet Peter Wright turns up frequently to record it. It will be the third St. Luke’s church on this spot that Peter has seen with his own eyes. If he says he saw the iron church, then he’s either been at the sherry, or he’s a lot older than I thought!

By the way, a few days ago the Isle of Dogs Life blog also had an article featuring St Luke’s church this week. Obviously I need to get out of bed earlier, but I suppose its inevitable that two Island bloggers will eventually, accidentally post on the same subject. You can find it here: http://isleofdogslife.wordpress.com/2014/10/09/farewell-to-the-old-st-lukes-church-millwall/

In the mean time, a few architect’s impressions of the new church and community centre. 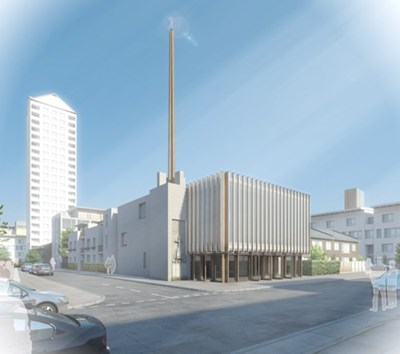 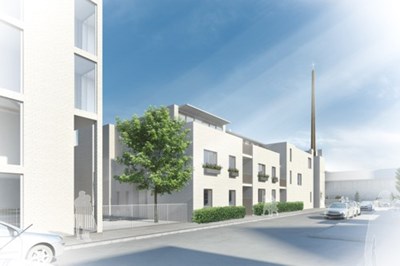 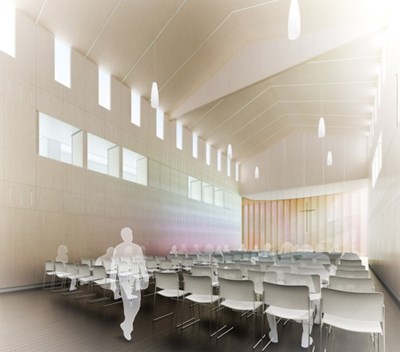 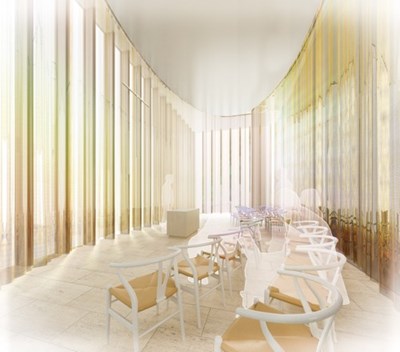 Church Interior at its Smallest

This entry was posted in Uncategorized and tagged St Luke's Church. Bookmark the permalink.

15 Responses to A Pictorial History of St. Luke’s Church, Millwall