Posted on December 3, 2014 by Mick Lemmerman

The Worshipful Company of Ironmongers (whose origin can be traced back to 1300, when they were known as the Ferroners) is one of the Livery Companies of the City of London. Originally iron merchants, today they are primarily a charitable organization.

The Ironmongers arms on a 1913 cigarette card, with a depiction of mythical salamanders supposedly able to withstand fire.

In 1730, the company bought a large amount of land, mostly marshland and mostly in Essex and in what we now call East London. This included 33 acres of land on the Isle of Dogs purchased from Sir Gregory Page, a Blackheath baronet. The land ran south-west from Chapel House to the river (site of the later Drunken Dock. between the Vulcan pub and the river). It comprised three fields: Barnfield, Great Barnfield and Little Barnfield.

The following shows the area on a modern map.

Until the end of the 1700s, the land retained its function as pasture, being leased to local graziers. By the early 1800s, though, the construction of West India Docks was complete, industry was spreading along the riverfront. and there was pressure to build housing and/or factories on this piece of land. The first plans envisaged filling the Barnfield Estate with housing.

By the 1850s, the first few houses were built on either side of West Ferry Rd.

The inlet, also known as Drunken Dock, had been developed to become a mast pond next to the Mast House.

The Tindall brothers (spelled Tyndal in the map) had built a cooperage which later became a graving dock.

Betton’s Terrace is a reference to Thomas Betton, turkey merchant. The Ironmonger’s Company was actually operating as trustees of his estate when they made the Barnfield purchase.

It was also around this time that one public house (the Ironmonger’s Arms) and two beer houses (the Vulcan and the Magnet & Dewdrop) were built. Ironic, because the Ironmonger’s Company, by now more a charitable organization than group of iron merchants, was a teetotal organisation, supporters of the temperance movemement. The three pubs were given names related to the Ironmongers, but I’ve not yet been able to figure out the meaning of Magnet & Dewdrop.

In 1870, according to Survey of London (Athlone Press):

So far the development had turned out well …. the leases were shorter, the rents higher and the houses bigger than on neighbouring estates, and a site had been let for industrial purposes. Further development, however, was held up, partly by negotiations with neighbouring landowners for exchanges of ground to improve the line of the intended main road through the estate, partly because the Charity Commissioners wanted roads and sewers to be made only by degrees, as building proceeded. But soon it was too late to do much more. The newly incorporated Millwall Freehold Land and Docks Company compulsorily purchased most of the ground not built upon. In addition, the London and Blackwall Railway Company obtained statutory powers to acquire most of the few remaining acres for the Millwall Extension Railway. In the end the land was not required, but a blight was effectively cast over it. A small portion became a playground for St Edmund’s Roman Catholic School in 1876, but otherwise it remained pasture until the 1890s.

In the 1895 map below (click on it to see a bigger version), Chapel House is remembered by the reference to St Mary Chapel in the top right, the southern end of Millwall Docks Graving Dock (today known as Clipper’s Quay). When the Millwall Docks were built, there were still remains of the former chapel, farm and hamlet on the site. Some of these remains were visible as late as the end of the 19th century. It is a real shame that no photos or other records were made of what was the first (and for many centuries the only) inland settlement on the Isle of Dogs.

However, by the time of this map, most of the houses on the Barnfield Estate were slums, and at the beginning the 20th century the newly-formed Poplar Borough Council had condemned many of them.

The ground north of Westferry Road was sold in 1920 to Burrell’s who built their Barnfield Works there (closed in the 1970s). 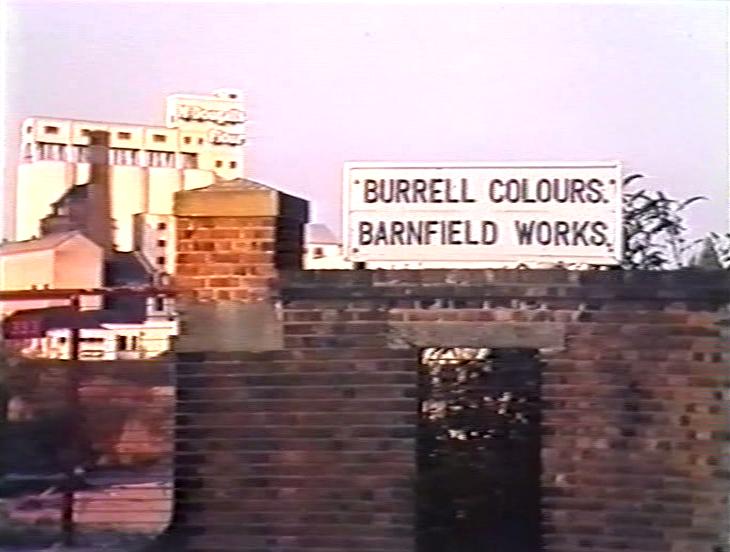 By 1950, what had not been demolished for reasons of slum clearance had been destroyed by WW2 bombing.

By this time, the Vulcan and the Magnet & Dewdrop were the only buildings remaining of the original development. Both buildings are still present, but are no longer public houses.

Today, the only reminder of the original name is Barnfield Place off Spindrift Avenue.