In the following contour map, I’ve done my best to represent the height of the different parts of the Island. (Sharp-minded people will be aware there aren’t really contours over the dock waters, the water doesn’t go up- or downhill, it’s just too time-consuming for me to represent it accurately). The numbers show the height in feet above sea level. What does that mean for a place next to the river? In this case, essentially and approximately, any height of 20 ft or more is above the level of a normal river high tide. A large part of the Island is below 20 ft; but, don’t worry, the riverside walls are high enough to prevent the water spilling over the edge.

Well, that’s the intention. It didn’t always work out well in the past though. The history of the Isle of Dogs is a history of floods – lying as the Island does within the floodplain of the Thames, as shown in this extract from an old schoolbook. 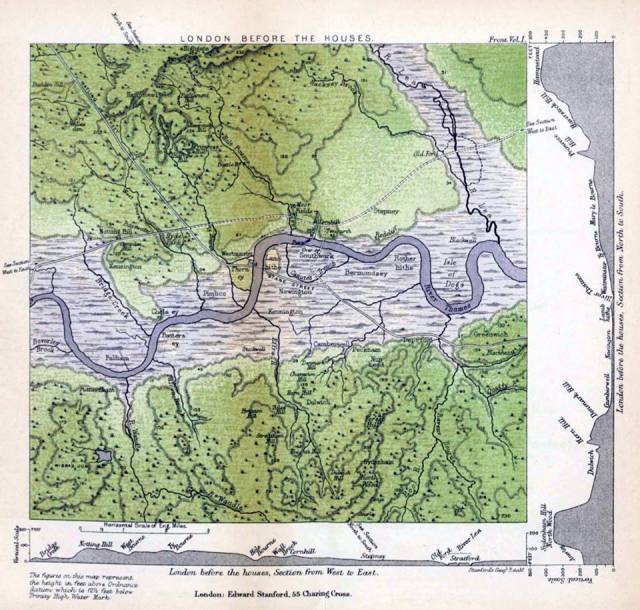 In pre-Roman times, the Island was uninhabited marshland which flooded at high tide, as was the case with much of the land along the Thames. In medieval times, an earth, chalk and timber bank (or wall, from the Old English weall, meaning ‘rampart, dyke, earthwork’) was constructed along the riverfront to protect the land from flooding. On the land side of the wall was a large ditch into which the water drained. At low tide, sluice gates were opened to empty the ditch into the river. By this method, the interior of the Island was drained, and pastureland was created from marshland.

The wall was a large construction: 15 ft high, with a flat top of about 18 ft across and a total width (including slope and ditches) of up to 150 ft. For the purposes of its considerable upkeep and repair, successive lords of Stepney manor granted sections of land along the river to freemen, on condition they maintained their own sections of the wall.

Evidentally, the freemen did not maintain their sections as well as required, for on Lady Day (25th March) in 1449 the wall was breached at the location of the present-day Mast House Terrace, causing an inundation of most of the ‘inland’ of the Island. This was catastrophic; in 21st century London, we have the technology and the means to recover relatively quickly from such an event. But in the 15th century this meant decades of drainage before the land could be used again.

The task of recovering the land fell to the recently-installed Bishop of London, Thomas Kempe, who had gained permission from Edward IV to oversee all Thames walls. He managed to recover nearly 500 acres of what was known as Stepney (Stebonheath) Marsh, but in 1529 the Island flooded again. It would be after yet another serious flood in 1629 before an official body – the Commissioners of Sewers for Poplar – was given legal powers for the maintenance of the wall and the activities that took place upon it, as well as the drainage of the marsh.

Despite the efforts of this new body, the Island flooded again and again. Acccording to the Survey of London:

Breaches occurred at Saunders Ness in 1652 and, more seriously, to the south of Limekiln Dock, in March 1660. In the second case, brought about by ballast-digging on the foreshore, several acres were lost to the river and a large pond or ‘gut’ formed. The owners ceded their rights in the drowned land to the commissioners and were recompensed accordingly. The Breach and the Gut remained until the construction of the City Canal [c1800]. 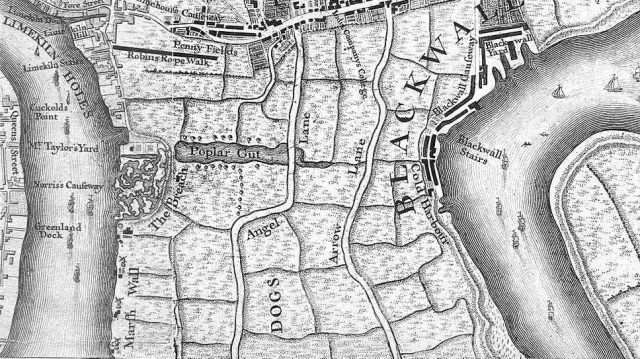 A large section of the medieval river wall below Limehouse was dramatically breached on 20 March 1660 and much of the Isle of Dogs was flooded. It was the worst breach since that of 1449, although smaller ones had occurred from time to time, and they may have become more frequent during the seventeenth century. The Poplar Commissioners of Sewers repaired the damage and rebuilt other sections of defective wall, at a cost of more than £16,000, raised by the imposition on landowners of very high rates of about £24 per acre. The work was done by William Ham, Orton Brooker and George Salmon, and presumably consisted of timber piling and planking, with chalk and clay fill and buttressing. The new section of wall was set well back from the river behind unprotected foreland that came to be known simply as the Breach. Most of the floodwater was drained, but approximately five acres of water remained, stretching eastwards from the Breach. This came to be called the Great Gut, or Poplar Gut.

Apart from the major floods every century or so, more frequent were the incidents of minor, local flooding. These were so common that virtually all basements in Island houses were permanently damp, which does question the wisdom of building houses with basements on the Island in the first place. A particularly badly affected area in the 1800s was the area around Ingelheim Place (off Westferry Rd and close to the modern-day Barnfield Place).

Not only was this one of the lowest parts of the Island (just 6 ft above sea level, see map above), the area had poor drainage and the ground floors of many houses were below street level. It was not surprising that there was an outbreak of Typhoid Fever here in 1900.

In the east of the Island, Cubitt Town was suffering similar problems:

One of the problems of the housing in Cubitt Town was that many basements were liable to flooding during periods of heavy rainfall, when the sewers were unable to carry the sudden increase in volume. The difficulty was reported in 1866 and, although the completion of the outfall sewer alleviated it for a time, became increasingly frequent during the 1880s, with particularly severe flooding after storms in June 1880 and June and July 1888. The completion of the pumping station at Stewart Street in 1889 did reduce the incidence of flooding, but did not remove the problem.

The Medical Officer of Health found it ‘scarcely credible that . . . it is possible to build houses with sunken basements, without the intervention of concrete or other impervious layers on low-lying, damp soil difficult to drain and sewer and liable to floods and overflow of sewage’. Nevertheless, a report of 1890 showed that there were 711 houses in Cubitt Town with basements. Many were found to be in a ‘deplorable unsanitary condition’ with foul and moist basements, and rising damp, which was partly attributable to the use of poor materials. There were occasional outbreaks of scarlet fever. 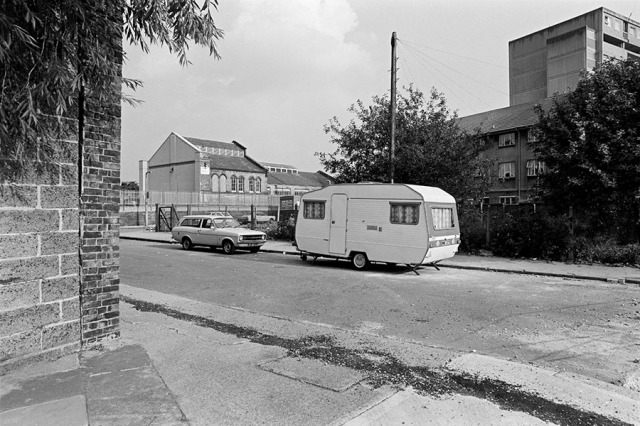 Stewart St with the pumping station on the left. Photo: Mike Seaborne.

Improved sewers and the construction of the pumping station in Stewart St (in 1888) did very much to alleviate the problem of flooding, but it could not entirely remove the risk. During Christmas 1927, heavy snow fell in the Cotswolds, where the Thames has its source. A sudden thaw occurred over New Year’s Eve, followed by unusually heavy rain, doubling the volume of water coming down the river. The sudden rise in water level coincided with a high spring tide and a storm surge from the North Sea. This combination of events produced the highest levels ever recorded in the Thames in London. The flood peaked at about 1.30am on 7th January 1928 when a level of 18 ft above the datum line was recorded, nearly a foot higher than the previous record. Extensive flooding resulted as the river overflowed the embankments from Putney to beyond Woolwich, drowning 14 people in Westminster and causing major property damage.

On the Island, the river overflowed at Johnson’s Draw Dock (next to the later rowing club) and north of Cahir St, in the area surrounded by the ‘Cocoa Nut Fibre Manufactory’ in the 1890 map extract above. To add to the problems, the floodwater also carried with it large quantities of heavy oil that had been washed out of local oil firms. The LCC decided that the dwellings in the area could not be repaired and carried out a large-scale demolition. They built the West Ferry Estate (Arethusa House, etc) on the site in the 1930s. 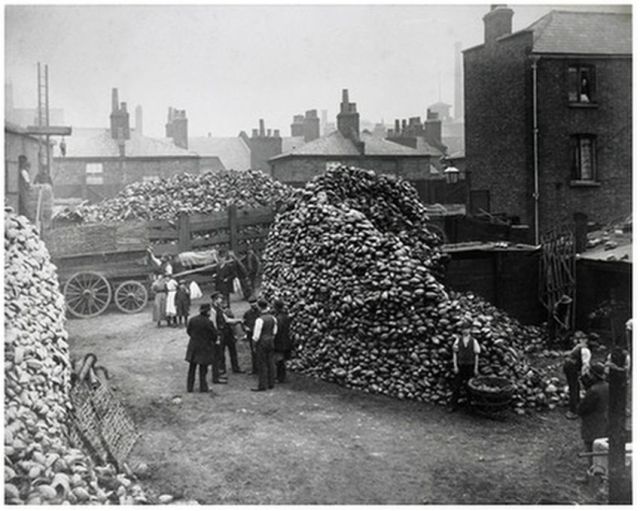 The coconut firm. Westferry Rd is in the background.

In 1953, a devastating tidal flood cost the lives of over 300 people in the east of England and many more in other North Sea countries. 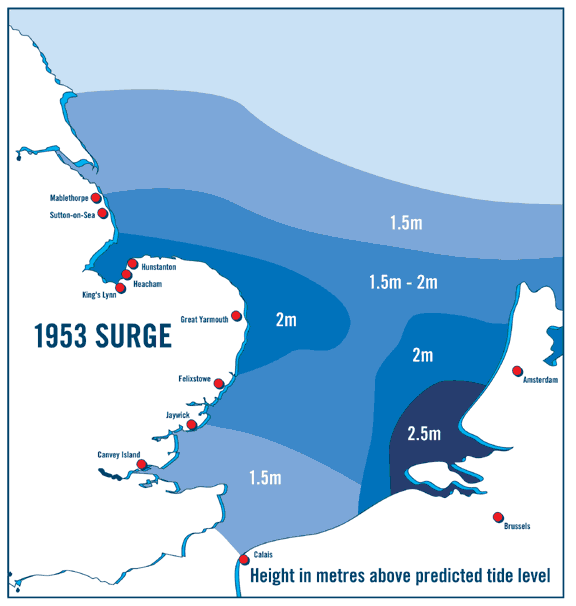 The death toll in England would have been much higher had the full power of the surge reached London, but this was avoided when the flood defences at Canvey Island (where 59 died) and the nearby mainland coast failed, leading to a dissipation of the flood in the Essex coastal countryside. As it turned out, London escaped relatively unscathed. London was lucky.

The Island’s (and London’s) flood defences could not withstand such ‘once in a hundred years’ or ‘once in a thousand years’ events, nor was that the expectation. More worrying and more manageable was that the the level of the high tide was rising about 18 inches every 100 years. A 1966 report by Sir Herman Bondi recommended that the riverside embankments should be raised and that a a flood barrier with movable gates built across the Thames. The Thames Barrier and Flood Protection Act 1972 gave powers to carry this out, leading to the construction of the barrier at Woolwich Reach.

The Island riverside banks were raised by a height of approximately 18 inches, mostly by means of concrete walls. And not a moment too soon; I recall as a child that the Thames would be lapping over the edges during particularly high tides, and fantasized about what would happen if there was a flood, thinking we’d be OK seeing as we lived on the second floor. I was only 11 years old, after all.

Right now, the Island’s walls are 4 feet above the level of normal high tide. With the rising sea levels, it is expected that they will again need to be raised in 2030, not that far off.

This entry was posted in Uncategorized and tagged Floods. Bookmark the permalink.