Posted on November 2, 2015 by Mick Lemmerman

This article was first posted in 2015, but is being reposted to celebrate the 125th anniversary of the Dockland Settlement organisation. The Friends of Island History Trust is involved in the celebration and are looking for people’s stories and photos about/of Dockland Settlement. If you have something of interest, and would be kind enough to share, you can e-mail at foiht2014@gmail.com.

A number of articles in this post are from the IHT collection. You can visit their website at www.islandhistory.co.uk.

The Welcome Institute, an organization established by a philanthropist called Miss Jean Price, provided hot meals at affordable prices to factory girls (serving anything between 70 and 170 girls a day), evening classes in dressmaking and needlework, Bible classes for boys and club-rooms for local football teams. In 1905, the institute moved from its damp, cramped premises at 333 Westferry Rd to a new building at 197 East Ferry Rd.

The ground floor originally contained a common dining-hall and a small dining-room, served by a kitchen and ancillary wing at the rear of the entrance lobby. The coal-house and lavatories formed a separate block at the back of this wing. On the other side, a second, larger, wing contained an assembly room, with a platform at one end. Staff quarters were placed on the first floor. The bay to the right of the street entrance was originally a single storey.

In 1913–14 the premises were enlarged by the addition of a small two-storey wing comprising a chapel over a first-aid room. Seating up to 25, the chapel was intended particularly for the use of girls preparing for confirmation. The first-aid room really came into its own for treating football injuries on Saturdays, when teams playing on the ground adjoining could use the Institute.

In 1923, following Miss Price’s retirement, the Welcome Insitute closed and the building was handed over to a youth-club organization founded by the former playwright Reginald Kennedy-Cox (1881-1966).  Its official name became Dockland Settlement (No. 2), joining Dockland Settlement (No. 1) in Canning Town. In the following years there would be more settlements opening in Rotherhite, Stratford and in other cities.

Between then and the Second World War the premises were extensively added to, which included the construction of a gymnasium and a new chapel, with a distinctive square tower and copper-covered spire.

A 1935 British Pathe film about the so-called ‘Dockyard Settlement’ organization.

For his work in this field, Kennedy-Cox was knighted in 1930. He retired from his full-time work in 1937. During the Second World War he served as an army welfare officer at Southern Command, with the rank of colonel. In 1944 his war work earned him a CBE. 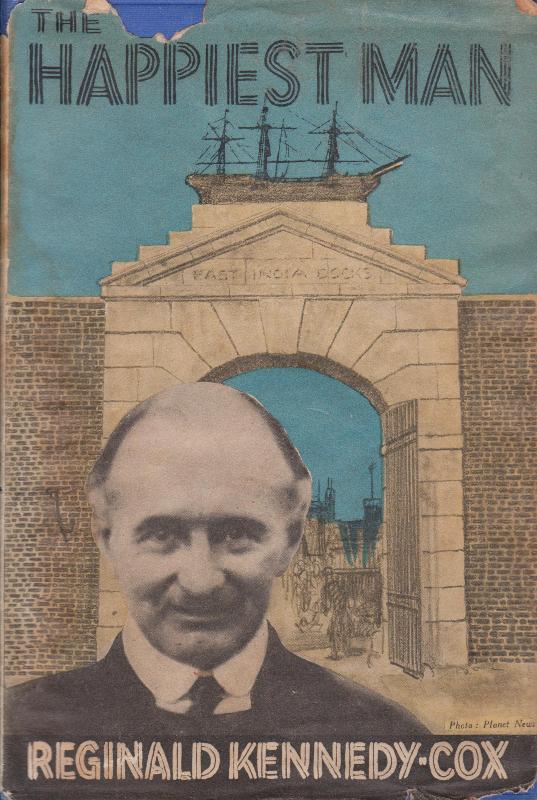 The cover of a 1932 biography of Kennedy-Cox. (Incidentally, the dock gate belongs to West India Docks, and not East India Docks as envisaged by the cover artist.)

For a brief period at the start of World War II, the Dockland Settlement was used as a military billet.

The installation was initially manned by the 154 Battery of the 52nd (London) Heavy Anti-Aircraft Regiment – a volunteer air defence unit of Britain’s Territorial Army.

While the accommodation and supply huts were still being built, the troops were billeted in Dockland Settlement. George Hames wrote in August 1939:

There was a heavy bang on the front door. A quick glance through the window showed a lorry pulling up outside. It was a battery of the Heavy Artillery (HA) just back from annual camp and as their battery site on the Mudchute was not ready, they just commandeered the club! The take-over was almost entire. The George Hall became the officers’ room, the library went to the sergeants; they took the gym, the main hall and the carpenters’ shop in the arches. The troops were with us until the following May, the HA being relieved by another battery who eventually took to their now finished quarters on the Mudchute.

– Extract from ‘The Isle of Dogs During World War II”, Mick Lemmerman

The Island Road Race started at Dockland Settlement. The 2 mile course ran up East Ferry Rd to the Queen, and then down Manchester Rd turning right at the Lord Nelson.

Of course, being surrounded by docks and water, the Dockland Settlement had its own boat. 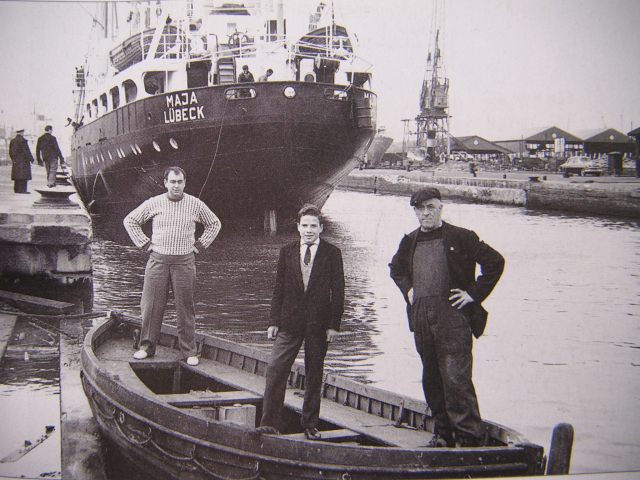 Marie Smith was a well-known and liked figure at Dockland Settlement, being involved in many music and dance activities. 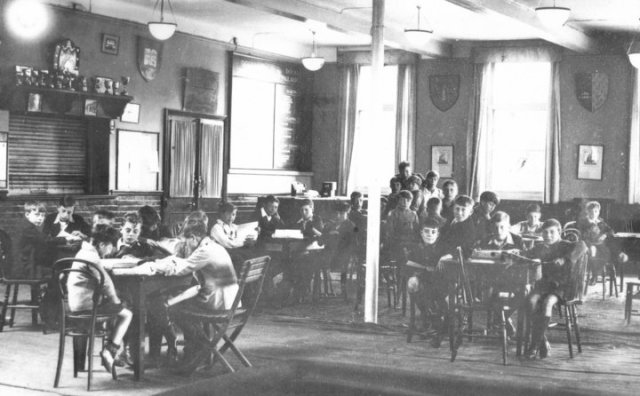 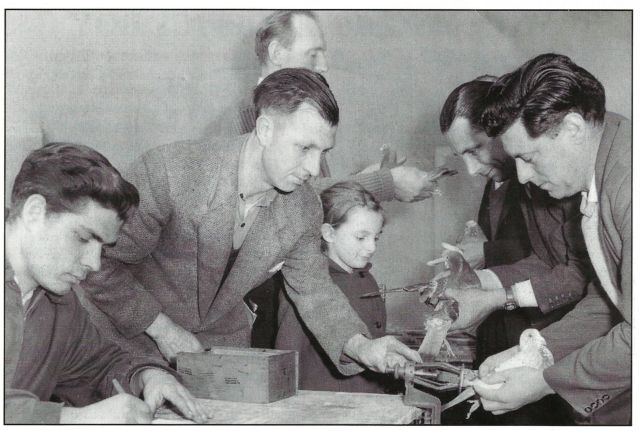 The Docklands Settlement continued its activites until into 21st century. 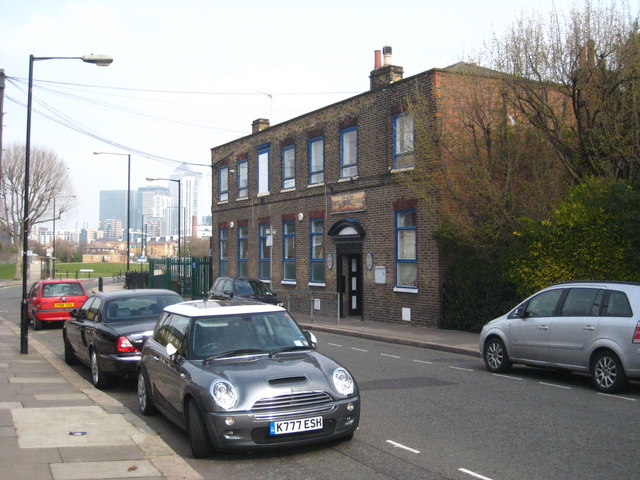 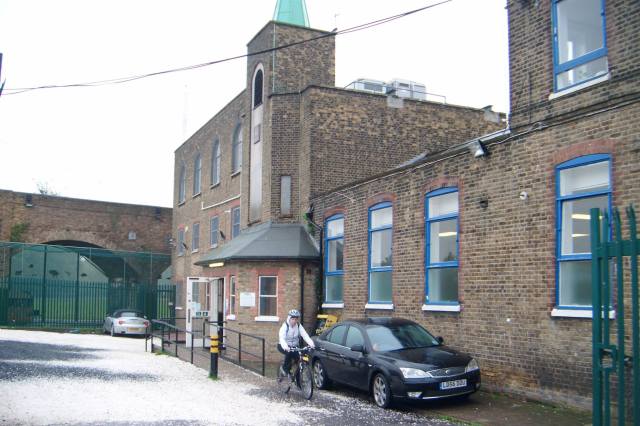 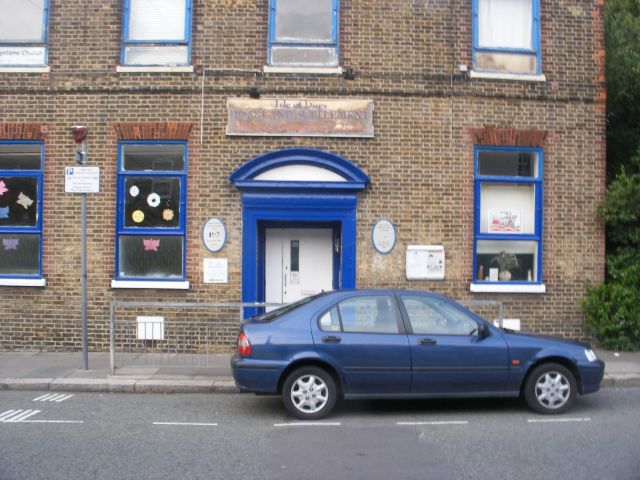 But, the building became increasingly costly to maintain. Also, it was in many respects an impractical building, being made up as it was of different sections and rooms which were built at different times. The Dockland Settlements organisation felt compelled to sell the buildings, which were purchased by the Canary Wharf College.

The college planned to redevelop the site, and demolition of the street-facing buildings started in about 2009. 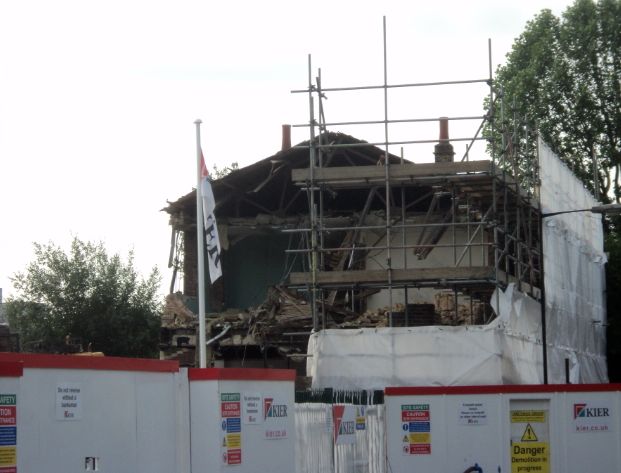 The new building, opened in 2011, is in striking contrast to the old building(s). The brickwork is intended to represent the Canary Wharf skyline.

The buildings at the rear, including the chapel and its spire, were preserved.

The chapel interior in 2015 (photos by Peter Wright). The memorial plaque is in honour of Harold Kimberley, a long serving warden of Dockland Settlement after whom Kimberley House in Galbraith St is named.

There was quite some upset when the Dockland Settlement buildings were demolished, and not everyone is mad about the design of the new building. Understandable…many people have many fond memories of the place and its difficult to see yet another piece of the old Island disappear.

However, at least has retained its social and community function. As the Dockland Settlements organisation state on their website (http://www.docklandsettlements.org.uk/):

The Dockland Settlements has recently sold this Community Centre to the Canary Wharf College – a new free school on the Isle of Dogs. It was sad to say good bye to the building but we could not think of a better use for the building than the education of children aged from 4 to 12.

This entry was posted in Uncategorized and tagged Dockland Settlement, East Ferry Rd. Bookmark the permalink.