Images of the Isle of Dogs During WWII

A few years ago I wrote a book about the Isle of Dogs during WWII. It didn’t contain all the photos I had collected of the Island during that period – for copyright reasons they couldn’t be included (many could be reproduced, but not for commercial purposes). And also, since the book was published, I’ve come across other photos.

I thought it was worth sharing them, so here is a selection. Not much text in this article, thus, just lots of images – and also a video of the anti-aircraft gun over the Mudchute doing its thing.

In fact, I think I will start with the video. It’s an extract from 1940 film produced by Shell Film Unit, “Transfer of Skill”. This extract describes the creation of fuses for anti-aircraft shells, whose use is demonstrated at the end, in an AA gun installation that was in the mudchute on the Isle of Dogs. McDougalls flour silo is visible in the background (west). 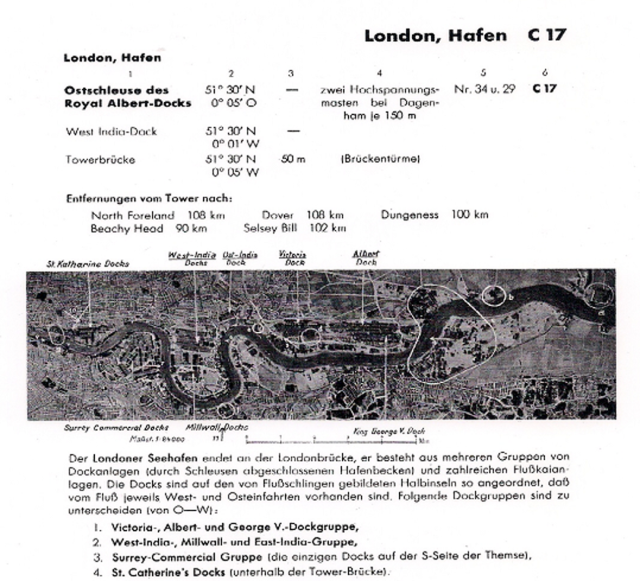 Reconnaisance photo taken by the Luftwaffe just before the war. It, and other photos of industry and docks along the Thames were bundled into a book which Luftwaffe pilots could study and take with them. It was pretty hard to miss the U-shaped bend in the river which was the Island, a handy navigation aid. 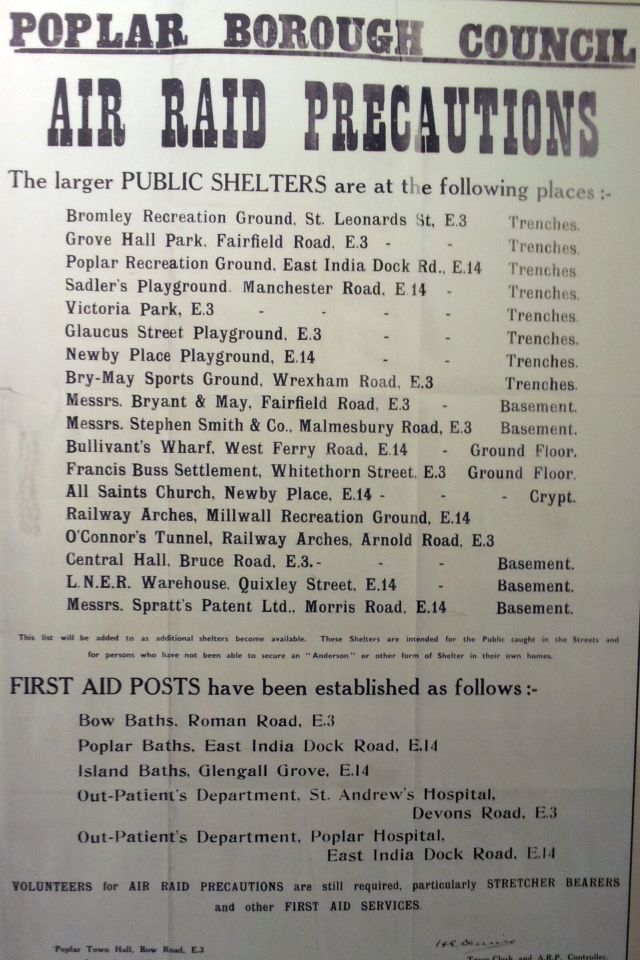 Poplar Borough Council announced public shelters in warehouse basements, church crypts, railway arches and similar. Purpose-built public air-raid shelters would not be constructed on any scale until the Blitz revealed the inefficacy of the shelter arrangements until then.

Tag which was attached to the clothing of a young June Inns when she was evacuated at the start of the war. Nearly all children were evacuated right away, but began to come back during the so-called ‘Phoney War”. When The Blitz started they mostly all moved away again from London. [Island History Trust] 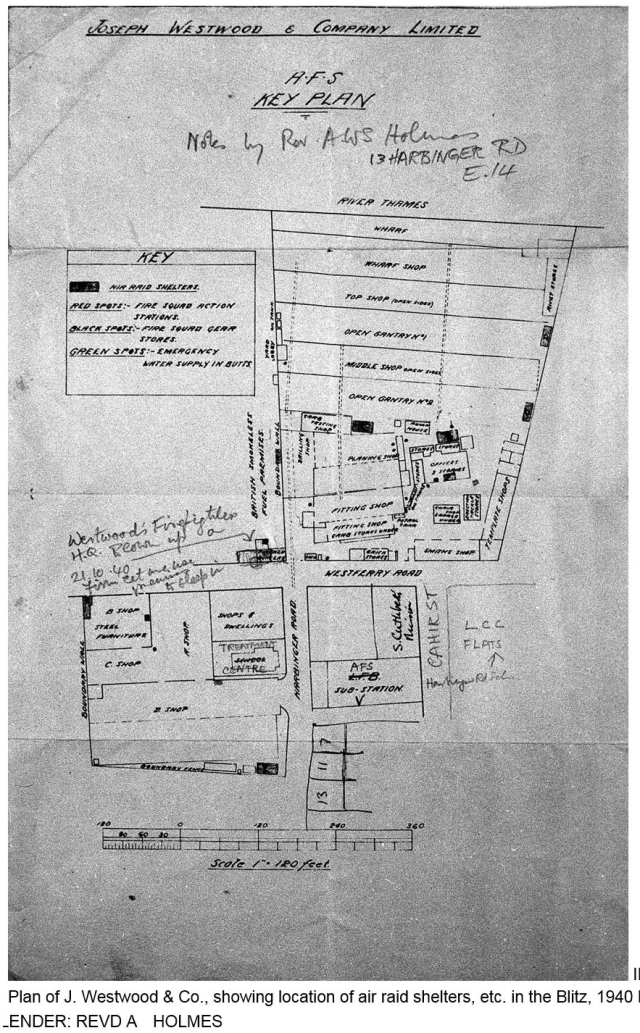 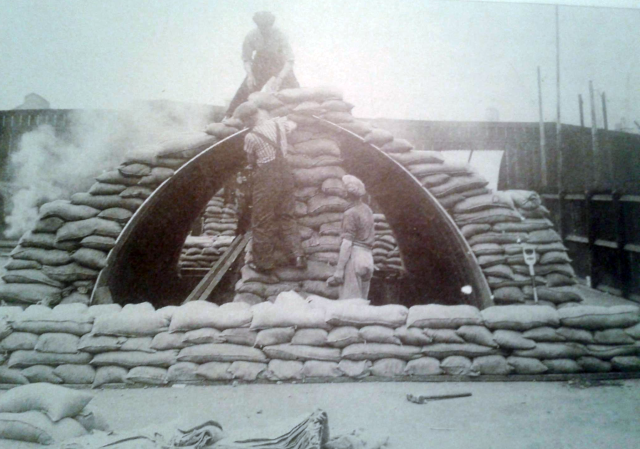 Constructing a shelter in Judkin Street in 1939 [Island History Trust] 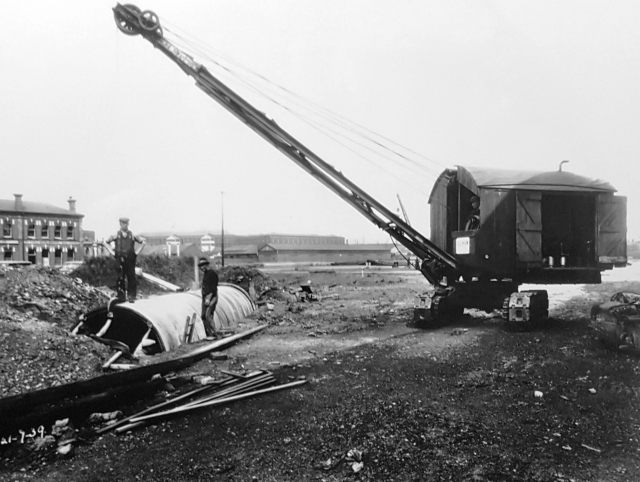 Construction of one of a number of shelters in the docks. This one is in West India Docks (Wood Wharf is in the background). [Port of London Authority] 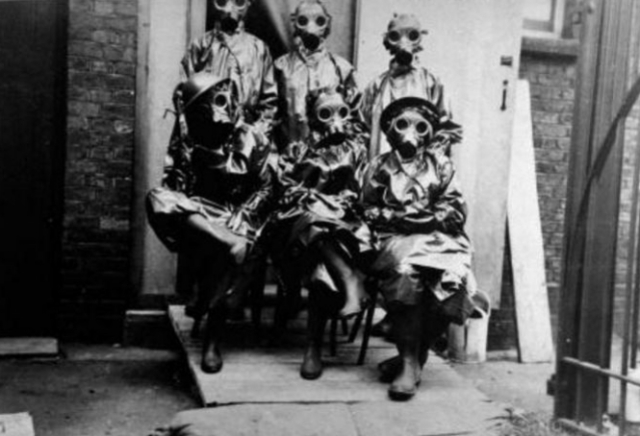 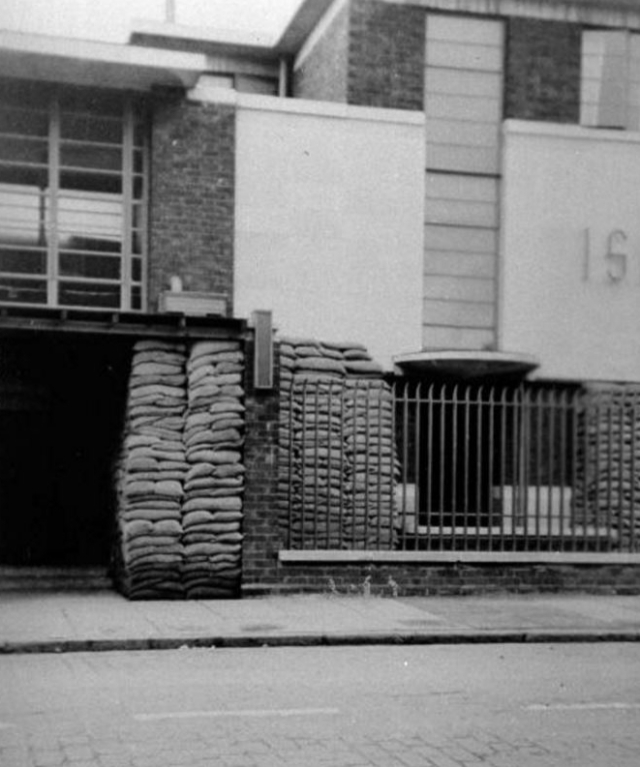 The Island Baths were closed, and converted into an emergency medical centre, protected by sandbags outside. [Island History Trust / Mrs Winnard] 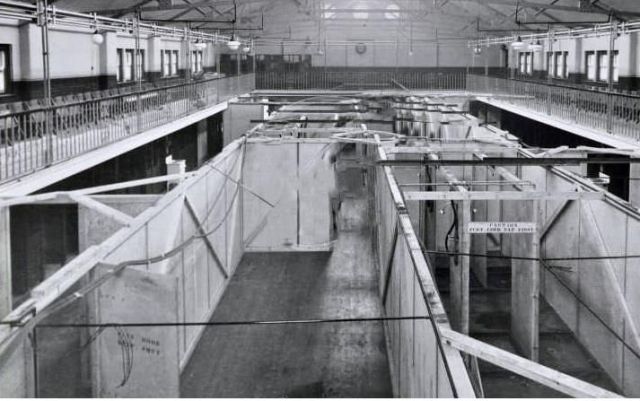 Island Baths converted into an emergency medical centre. The pool was often covered in wooden floorboards in peace time, so that dances could be held. Photo: London Metropolitan Archives (City of London) 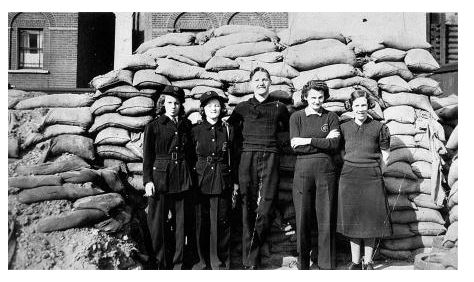 Auxiliary Fire Service (AFS) workers at their base at Millwall Central School, Janet Street. Stanley Hook with on his right Jean Skinner and Lily Patterson. On the left, Florrie Bernard. [Island History Trust] 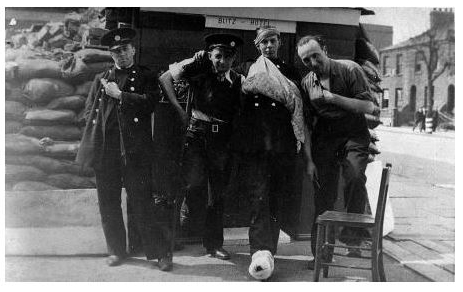 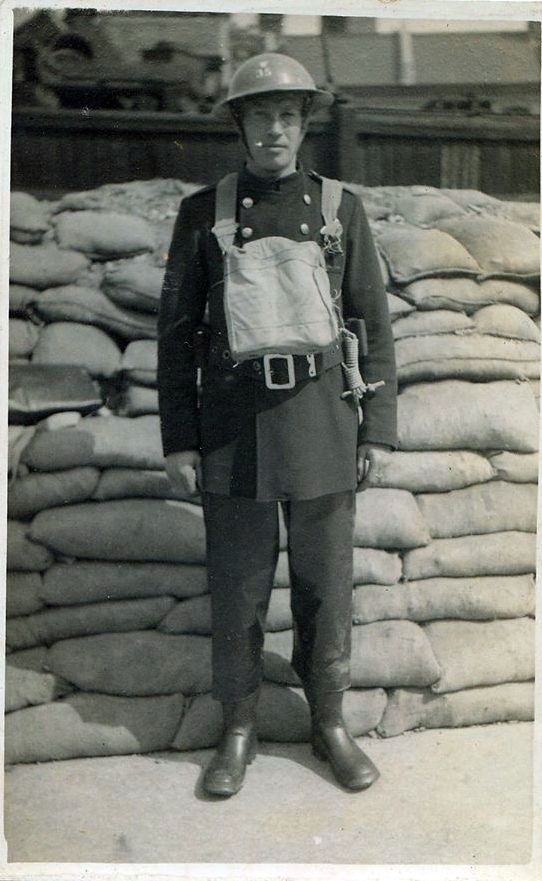 Auxiliary Fireman Barrett at Millwall Central School. I have the original of this photo, and cannot for the life of me remember where I got it from. 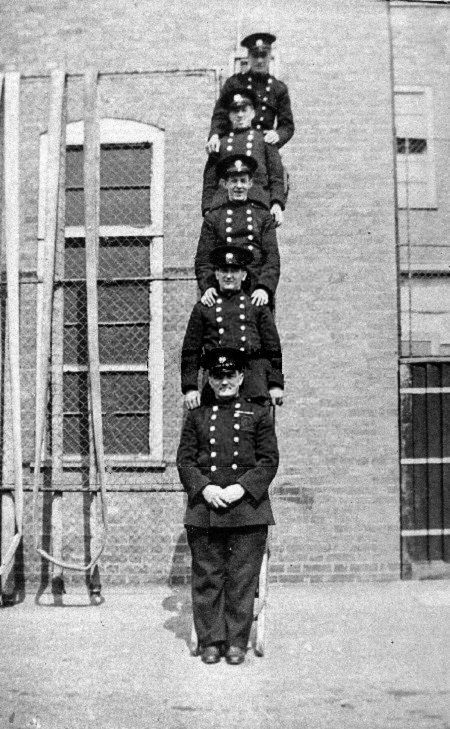 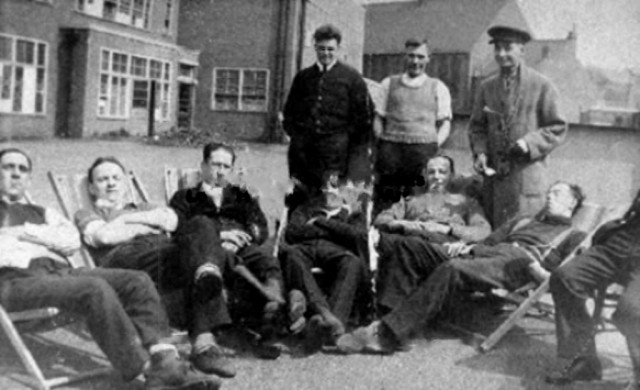 Filling sandbags in the playground of Harbinger School. 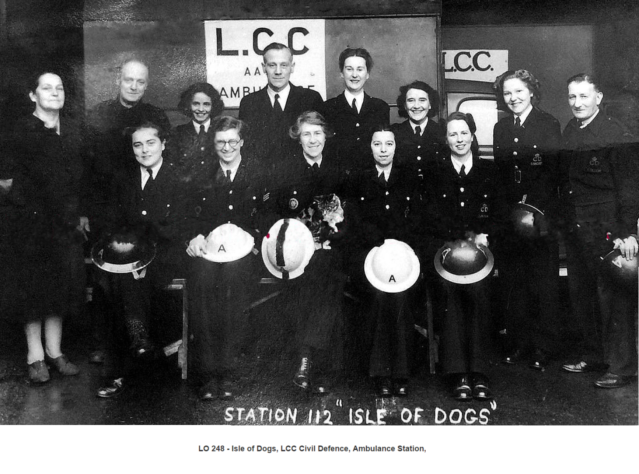 Anti-aircraft gun installation in the Mudchute, with a glimpse of the huts between them and ‘the rec’ (or wreck), the gritty football pitch in Millwall Recreation Ground, as it was known. 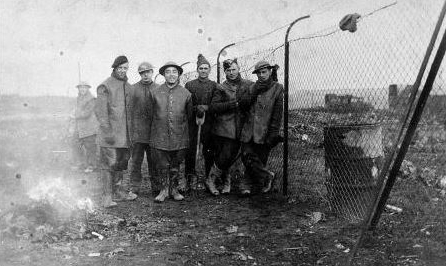 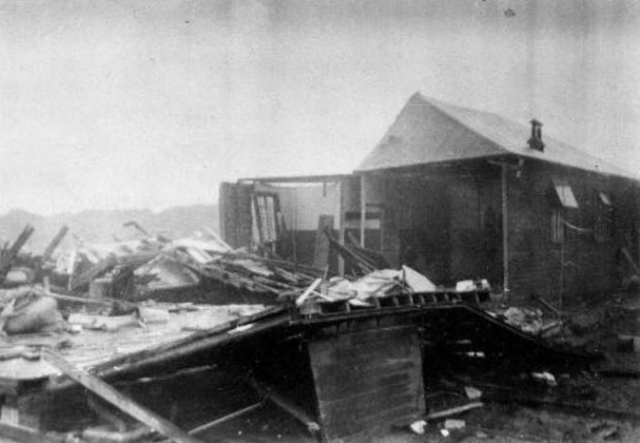 The Muchute anti-aircraft installation was hit on the first night of The Blitz (7th September 1940). Bombing seriously damaged the command post and destroyed the canteen and stores. The guns could no longer be aimed with radar or fired by remote control; the access road to the gun sites from Pier Street was also badly damaged making it difficult to get in fresh supplies, and gunners were bringing in replacement ammunition by hand. [Photo: Island History Trust]

Luftwaffe photo showing the plumes of bomb explosions in the Thames and in Millwall streets.

St, Cuthbert’s Church, destroyed during the first night of The Blitz, 7th September 1940. In the background, Harbinger School, with shattered windows and missing a few roof tiles. An emergency water tank was later built on the site, the area is now part of the school playground. [Rev. Holmes] 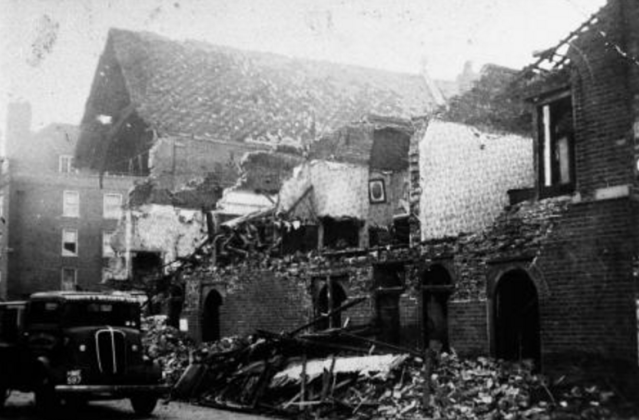 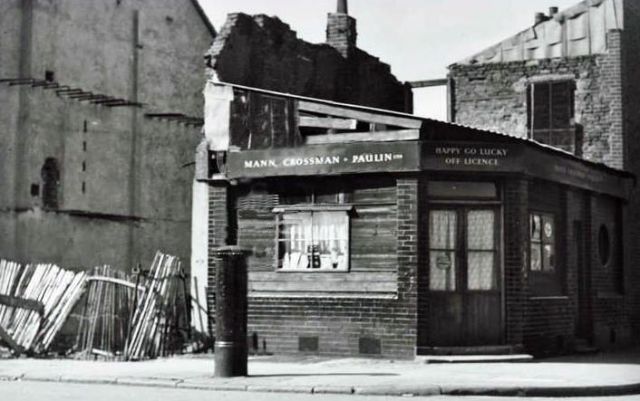 The ‘Happy Go Lucky’ off license on the corner of Glengall Grove and Strattondale Street – seriously damaged during the first night of The Blitz. Photo: London Metropolitan Archives (City of London) Barrage balloons over the Island. The view from the bridge which would later be replaced by the Blue Bridge, looking towards The Queen public house. [Screenshot from film, The Bells Go Down]

Damage to the Millwall Docks entrance lock at Kingsbridge by high explosive bombs on 10th September 1940. The entrance lock would never go into service again. 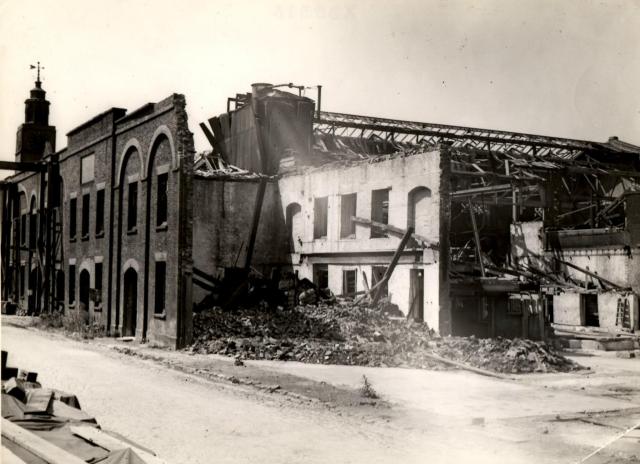 Heavy Rescue worker, Bill Regan (whose moving wartime diaries are available here) took a number of photos of bomb damage to the Island, risking a prison sentence of up to 3 years by doing so. Ironically, his photos were being developed by a policeman friend. Amongst his photos are the serious bomb damage inflicted on Billson Street and Parsonage Street (and area) on 19th April 1941, during which many residents were killed. 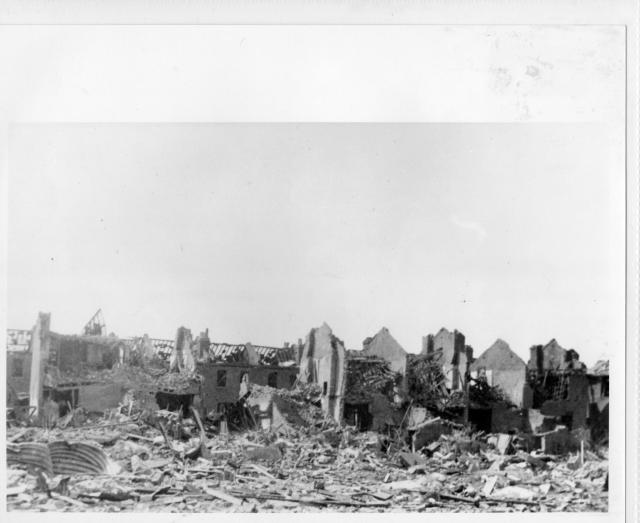 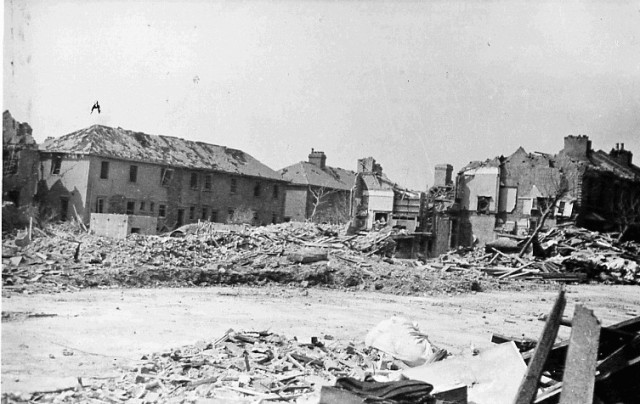 The rear of houses in Manchester Road from Parsonage Street. [Ann Regan-Atherton] 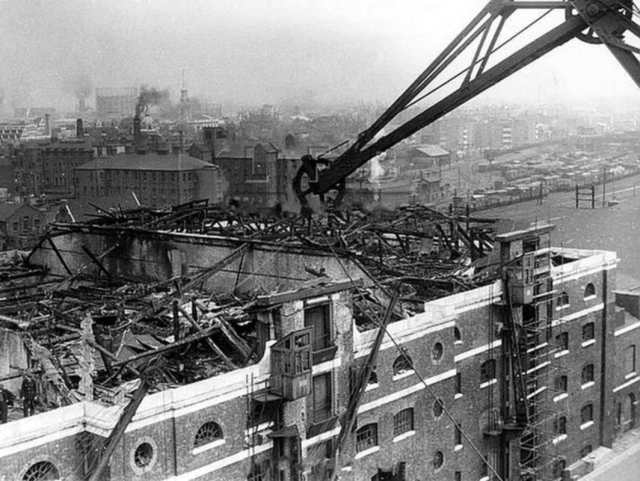 Cubitt Town School was the scene of one of the worst incidents of the war on the Island.  The school had recently been completely rebuilt, the new building dated from 1938, and it had been commandeered for use by the emergency services: Auxiliary Fire Service, Air Raid Wardens, Stretcher Bearers, Ambulance Service, a Mobile First Aid Unit – they were all quartered in the school. On 18th September a parachute mine fell on the school, killing close to 30 people, mostly emergency workers. 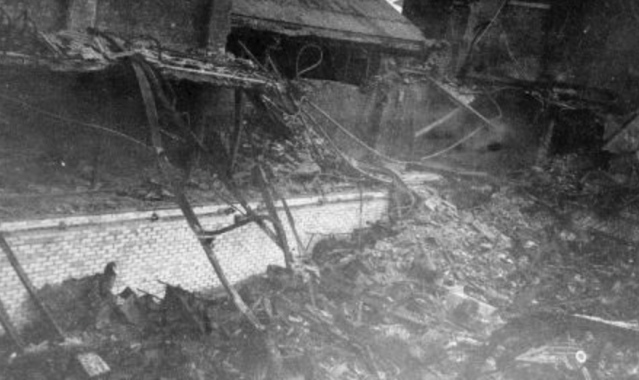 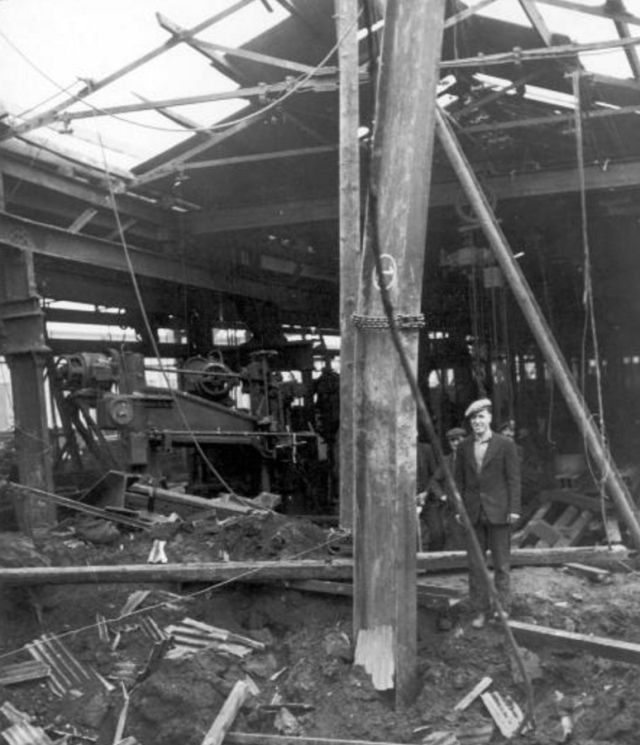 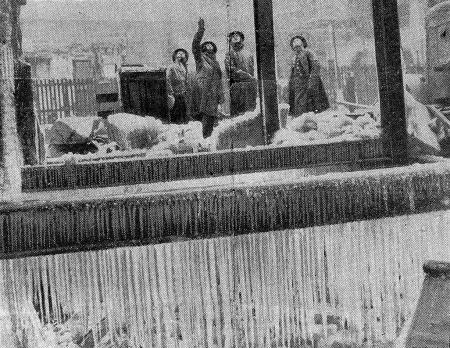 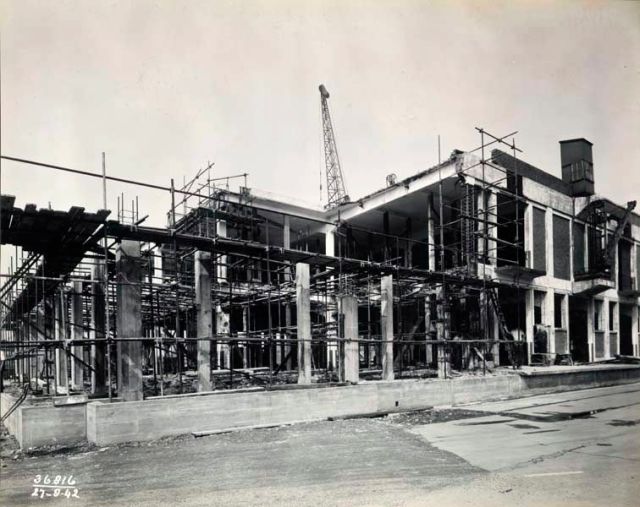 The site of Galleon House looking from the Police Station towards Glengarnock Avenue in the background.

Prefabs and the The Builder’s Arms in Stebondale Street, photo taken from the corner of Glengarnock Avenue, with the park in the background. The street was all but destroyed during The Blitz.

UXB dragged from foreshore below the Lead Works. [Lucy Reading] 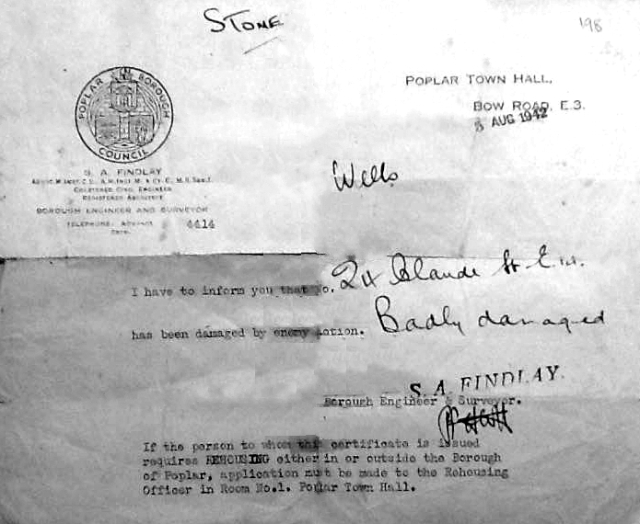 Wartime notice to move due to bomb damage, at 24 Claude Street. [Lester Stone] 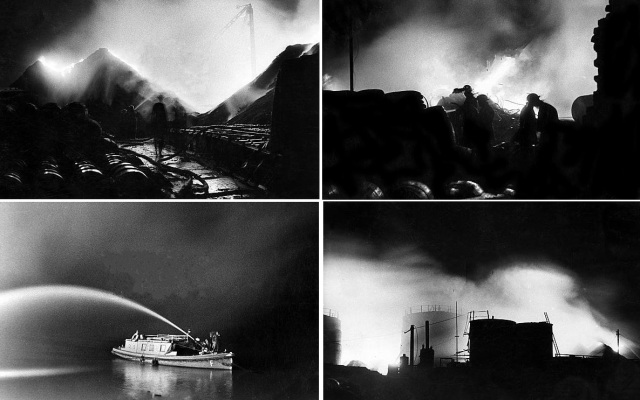 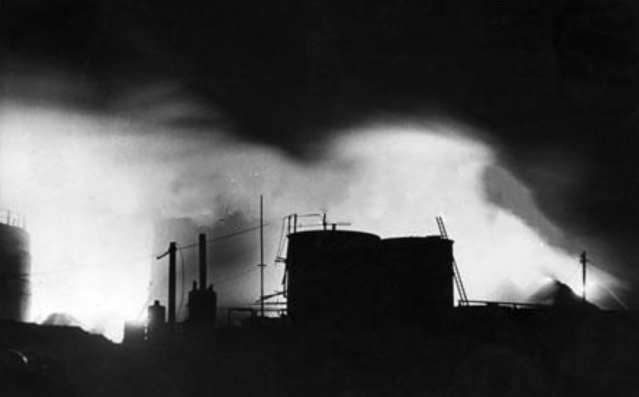 Canadian troops marching in to the West India Docks, 1944, possibly shipping out for D-Day. The beginning of the end…..

9 Responses to Images of the Isle of Dogs During WWII