Posted on December 9, 2018 by Mick Lemmerman

Before the end of the 18th Century, the Island was a sparsely-populated place – a mixture of marshland and pastureland, with windmills down the east side, catching the prevailing winds from the west. Then, the docks, shipbuilding and ironworks arrived – by 1880 virtually all land along the river was occupied by industry, while the centre of the Island was dominated by the West India and Millwall Docks. Island firms and their products were known around the world.

A century later and the docks were closed, and its land handed over to the London Docklands Development Corporation. The LDDC were also given extraordinary powers for the compulsory purchase of land occupied by riverside firms, which they used to buy up almost all land, and demolish everything on it. In less than a decade there was virtually no trace of the Island’s industrial past.

To demonstrate the extent of this, on the following satellite photo of the Island, I have shaded white all areas demolished and/or built-upon since 1980. That is, only that which is still visible in the photo preceeds 1980 (and much of that is occupied by 1960s housing developments).

Survivors of note along the riverside are:

I excluded Vanguard from this list because – although the firm preceeds 1980 – their premises do not. However, Vanguard and E.Klein do represent the only original companies still doing business along the river on the Isle of Dogs.

One small area which escaped the attentions of the LDDC, sandwiched as it is between the riverside and dock developments, was Tobago Street. Survey of London:

By the 1890s Tobago Street north of Manilla Street had lost most of its residential character of 30 years earlier. The west side of the street was occupied by nondescript industrial and commercial buildings…

In the twentieth century industry continued to make inroads into the housing throughout the former estate, but only in the most half-hearted manner. By the 1900s, and probably long before, most of the houses, which were let entire to weekly tenants, were in poor condition.

Some of the ‘nondescript and commercial buildings’ described by the Survey of London are visible in the background of this 1930s photo, which shows the view looking north up Tobago Street from its southwest corner with Manilla Street.

The warehouse closest to the kid in the background in the previous photo was seriously damaged during WWII, and the site was later occupied by a John Lenanton shed, leaving only the northernmost warehouse standing. It featured briefly in an episode of the 1980s Prospects TV series.

Ten years later, the old Morton’s building in Cuba Street as well as the former Millwall Dock Working Men’s Club were also still standing, but they would be demolished around the end of the 20th Century.

Tobago St. with Cuba St. in the background.

Then, only this last, ‘ nondescript’ warehouse remained. It became a much photographed warehouse, possibly because there were no other old industrial buildings left in the area. I can imagine photographers and historians venturing south from Limehouse, looking for evidence of a rich industrial past, and discovering that there wasn’t anything; just an old shed behind a former pub (the Blacksmith’s Arms, which is now a restaurant) in Westferry Road.

The recommended website, http://www.derelictlondon.com, also managed to get a couple of photos of the interior….

As well as the exterior…..

And then, in 2013, it was gone, to make room for another apartment block. Peter Wright managed to get a couple of photos of its demolition…. 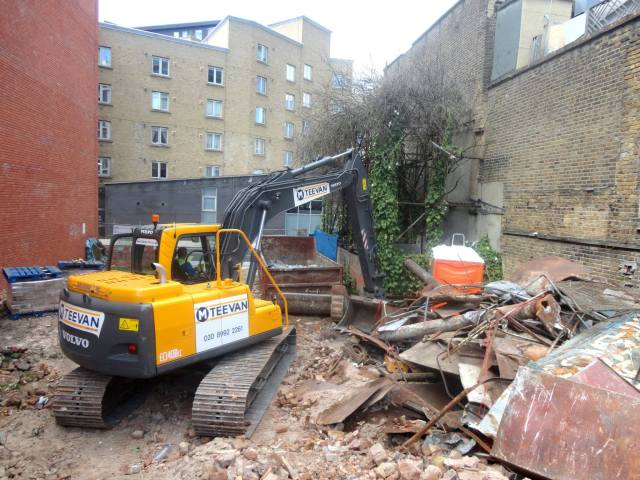 It was an unremarkable building, architecturally. It had no significance for the industrial development of the Island. Not many people noticed it, and virtually nobody mourns its departure. However, its passing is of monumental significance, as it marked the end of the old Island.