A History of The Arches in Millwall Park

Posted on November 9, 2019 by Mick Lemmerman

Known simply as ‘The Arches’ to most Islanders, the railway viaduct which runs through Millwall Park is one of the few 19th century structures still standing on the Island. The arches have lost their original purpose – albeit with a brief revival in the 1980s and 1990s – and architecturally there is nothing special about them, but they are a significant and integral part of the Island’s scenery and history.

The viaduct is an important local feature, visually very important as a backdrop to activities in the park (and also a visual barrier) and a reminder of the industrial heritage of the area. The mesh fencing to some of the viaduct arches has been very successfully decorated with pieces of art.
Millwall Park Management Plan, Jan 2008
(London Borough of Tower Hamlets)

The arches were built around 1872 as part of the Millwall Extension of the London and Blackwall railway line. This extension ran from Millwall Junction (just north of West India Docks), down the east side of the newly-opened Millwall Docks, to connect with North Greenwich Railway Station in Ferry Street (a section of the road which was then named Wharf Road).

One of the earliest images of the arches was a drawing in a 1905 article written by George Robert Sims for The Strand magazine (this and other articles were later collected in a book, ‘Off the Track in London’). The drawing was made by Thomas Heath Robinson,  brother of William Heath Robinson, best known for drawings of ridiculously complicated machines for achieving simple objectives; so-called ‘Heath Robinson Machines’.

The drawing is more than a bit fanciful – the factories and chimneys imply a view towards the river, yet the many ships’ masts imply a view towards the docks in the opposite direction. The position of the rail bridge close to the centre of the drawing – whether meant to be the bridge over Manchester Road or East Ferry Road – makes no sense at all. Still, the arches are at least recognizable, the same as any other railway arches. (On the basis of this single drawing you might assume Heath Robinson didn’t actually visit the Island, but other drawings he made at the time clearly demonstrate that he did).

The first photo of the arches was taken in 1903, in the background of a photo of a football match between Millwall (whose ground was in what would later be Millwall Park) and Everton.

1903. Entrance to the ground was via one of the arches, from East Ferry Road.

The following photo, taken in about 1920 – a decade after Millwall FC had moved over the water – shows a steam train travelling over the arches. The area on either side of the arches appears to be wasteland, but it was around this time that London County Council acquired the land from the Port of London Authority and created a park, known as the Millwall Recreation Ground. Perhaps what we can see in the photo are signs of the redevelopment, and not wasteland.

From an early period, some of the arches were enclosed and occupied by businesses…

Railway traffic on the Millwall Extension had been steadily declining since WWI, largely due to the increasing competition from motor-buses. Passenger services between Millwall Docks Station (location of present-day Crossharbour DLR Station) and North Greenwich Station ceased altogether in 1926. The rail bridge over Manchester Road was demolished not long afterwards. 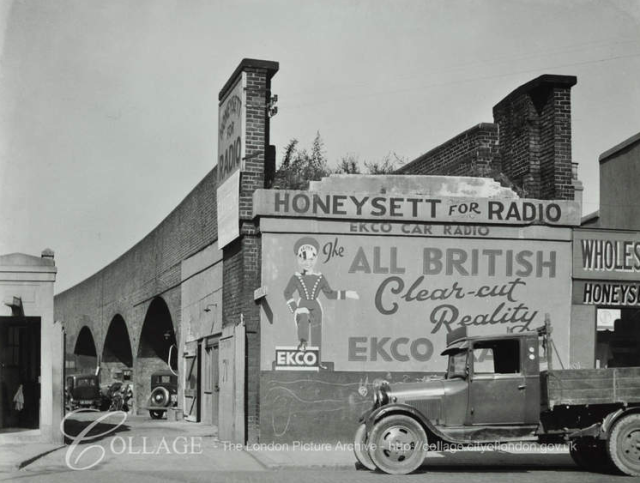 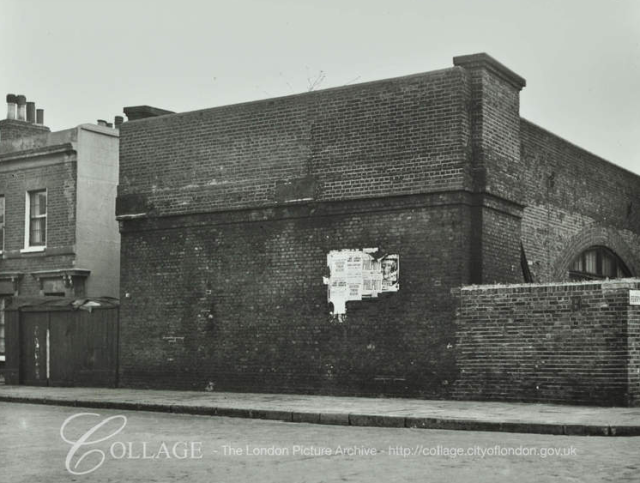 Circa 1950. Note that there were also arches on the other side of Manchester Road, enclosed and used by firms. (www.britainfromabove.org.uk)

Hawkins & Tipsons used the opportunity of the closure of the railway line to acquire and demolish the section of the arches which separated the two halves of their rope works. 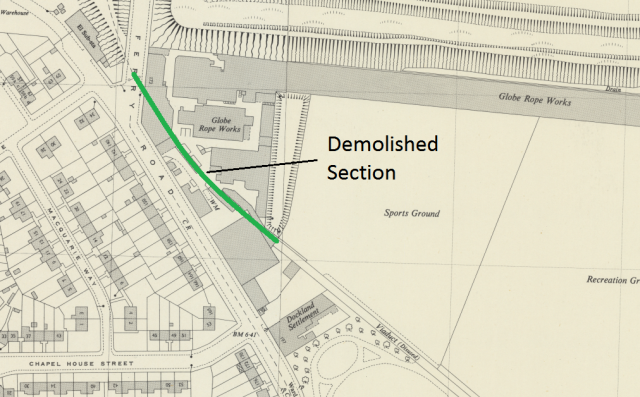 Fortunately (and surprisingly), the remaining section of the arches was not demolished, and it features in the background of many old photos. 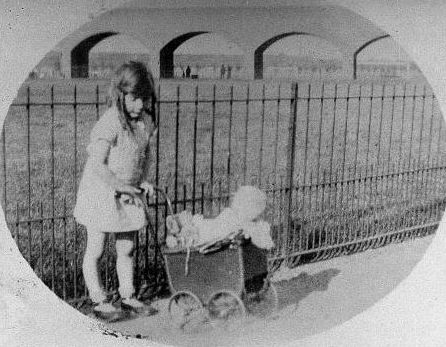 With WWII looming, the arches were designated as the site of a public air raid shelter:

Dennis Lowther (whose comments in Facebook inspired me to write this article):

l fell out of one of the top bunks one night finished with a bump big as a tennis ball. A couple of air force girls put cold compresses and l went home and slept on the floor under the stairs. No more underneath the arches for me oh no no no. Could not afford to [be] off sick in the 40s.

If you look closely enough, you can still find signs of the arches’ use as a shelter (Photo from ‘The Isle of Dogs During World War II‘ by yours truly): 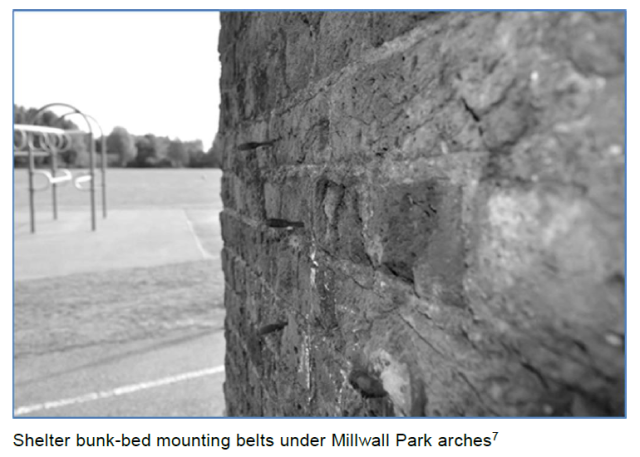 The arches were damaged during WWII, with a section of the top walls destroyed (just to the right of the bricked-up sections which served as an air raid shelter):

c1949. Much of the park was still occupied by allotments which were set up during the War. The bowls club had not yet moved to the park from Island Gardens. Click for full-sized version (www.britainfromabove.org.uk) 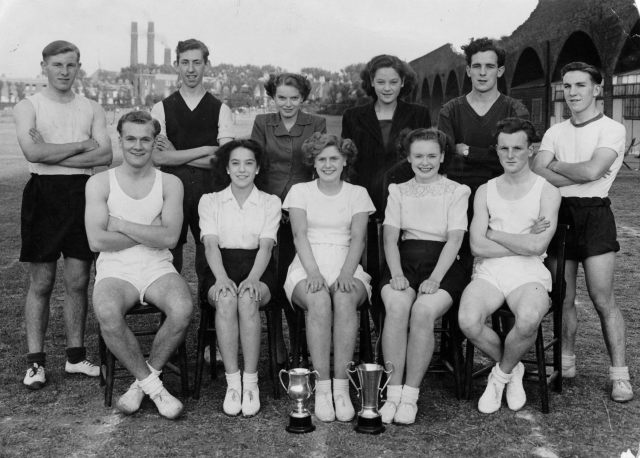 There remained a gap in the walls until the arches were reused by the Docklands Light Railway in the 1980s. If you’re ever in the park, you can see where the repair was made by the different colour of the bricks used.

Once upon a time, part of Millwall Park was occupied by the playing fields of George Green’s School, originally located in East India Dock Road. Hut-like structures were built under the arches and these served as changing rooms.

In the 50s there was a Refreshments in one of the arches. The sign pointing to it lasted for years long after the cafe had gone, then jobsworths took the sign away.

That cafe was where the barage balloon staff were stationed l made tea and toast for them on occasions after the all clear sounded they also joined in our sing a longs when it was quieter such a strange time growing up in those times Peter most of the park was being used as allotments Dig for Victory was a much used slogan at that time. 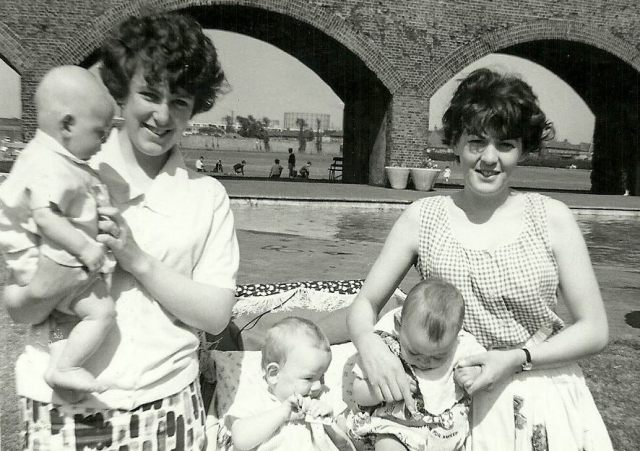 Around this time, our family moved to the Island.

Among the neighbours on our landing was the Sparks family. ‘Man of the house’ was Ray Sparks, a muscular bloke who ran a gym under the arches. Gary Sparks:

At the end of the viaduct is where my Dads Gym was I remember playing there as a kid. 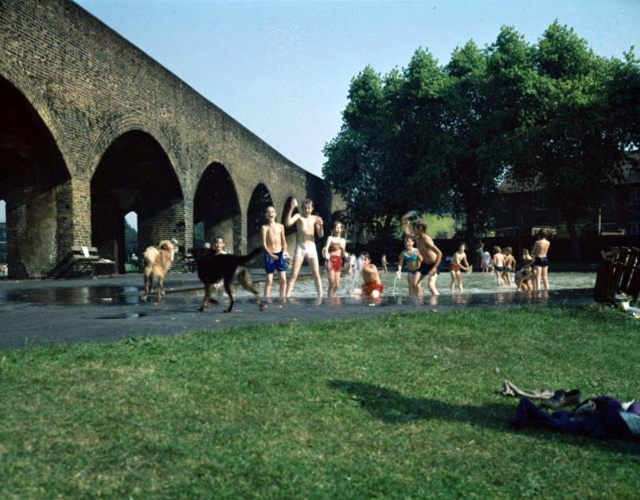 My mates and I once managed to climb up on to the arches at the Dockland Settlement end. It was full of weeds and rubbish, as well as the filthy black clinker that once formed the bed for the railway track, and which was very handy for throwing at unsuspecting people in the park. We walked to the end of the line at Manchester Road, decided we couldn’t climb down there, turned round, and then walked back (throwing clinker at people who by now were very much suspecting). Ah, those were the days, such excitement. 🙂 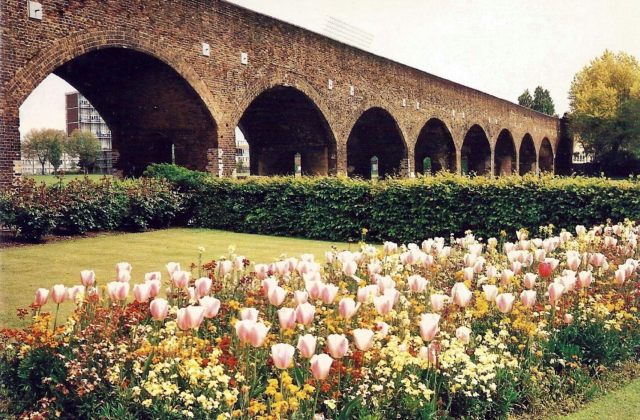 Circa 1980. The arches in Ferry Street. Photo: Unknown

In 1982, the go ahead was given for the London Docklands Development Corporation to build a light railway through the Isle of Dogs, connecting it and the rest of dockland to the City.

…it was decided to resurrect the railway as the Docklands Light Railway (DLR). This ran on the viaduct across the park to a new station at Island Gardens, south of  where it sits now. The construction process led to the loss of the use of the arches by the Council and George Green’s School. The former park café and the changing rooms were relocated into temporary buildings, which in the end lasted some 15 years.
Millwall Park Management Plan, Jan 2008
London Borough of Tower Hamlets

Conveniently, the route of the old Millwall Extension could be followed, and there was even a ready-made railway viaduct along some of the southern section of the route. A second railway bridge over Manchester Road was constructed.

For the first time in 60 years, trains ran along the top of the arches in Millwall Park.

But, the trains did not run for long. In 1999, the DLR was extended through a tunnel under the Thames to Lewisham. The railway line descended underground before reaching the arches, and so the arches again lost their function as a railway viaduct (and the bridge over Manchester Road was demolished again). 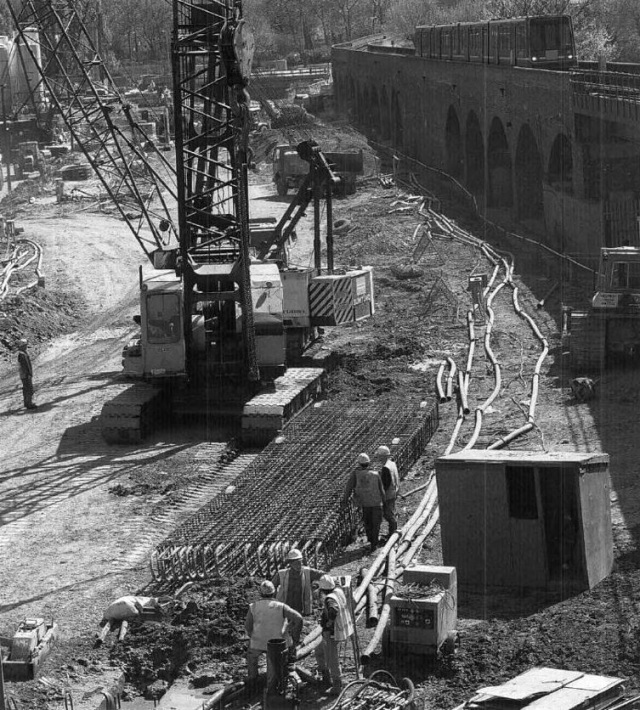 DLR tunnel construction. Much of the excavated soil was used to raise the level of Millwall Park, to reduce the chances of flooding (for most of its existence, sections of the park were prone to becoming huge puddles in the winter). 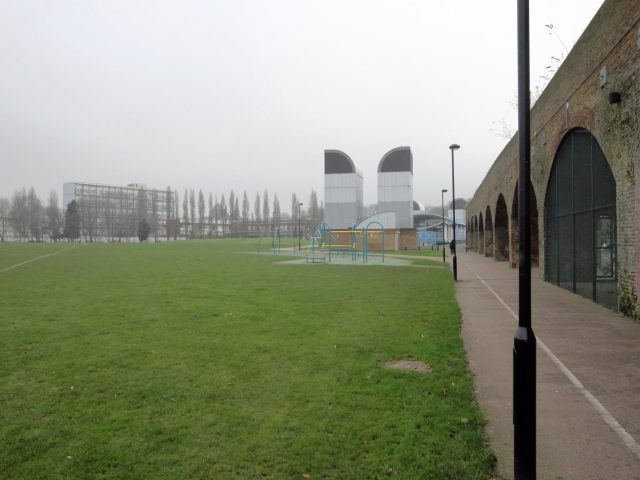 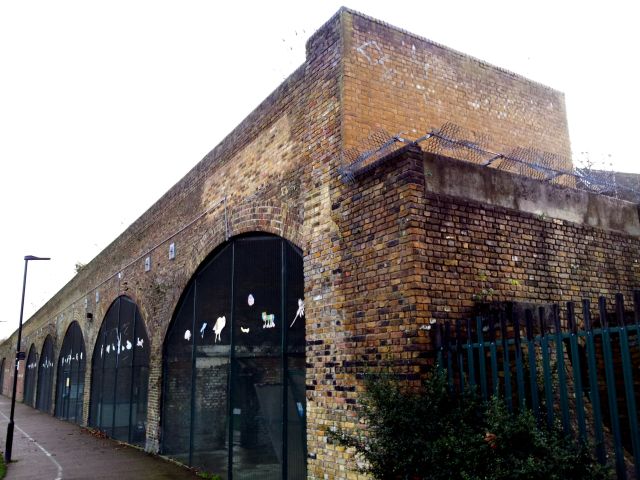 In 2007, Millwall Rugby Football Club took on a 15 year lease for two of the railway viaduct arches as its clubhouse, close to a century after the departure of Millwall Football Club (who had different-shaped balls) from the park.

Work began in August 2007 with the removal of old equipment that had been laid unused for nearly 20 years. Over the next 2 years walls, floors, piping and new facilities were all laid down. The work was only made possible by the help from many committed volunteers and the clubhouse eventually had its official opening day on 28 March 2009.

In 2009 Millwall RFC were granted permission from the Tower Hamlets Burough Council to play rugby on Millwall Park in front of the clubhouse.

Improvements have continued over the years with the generous help of our volunteers and sponsors. 2018/19 saw the installation of new seating, a full AV system, and general Clubhouse upgrades that ensures a warm, welcoming space for all. 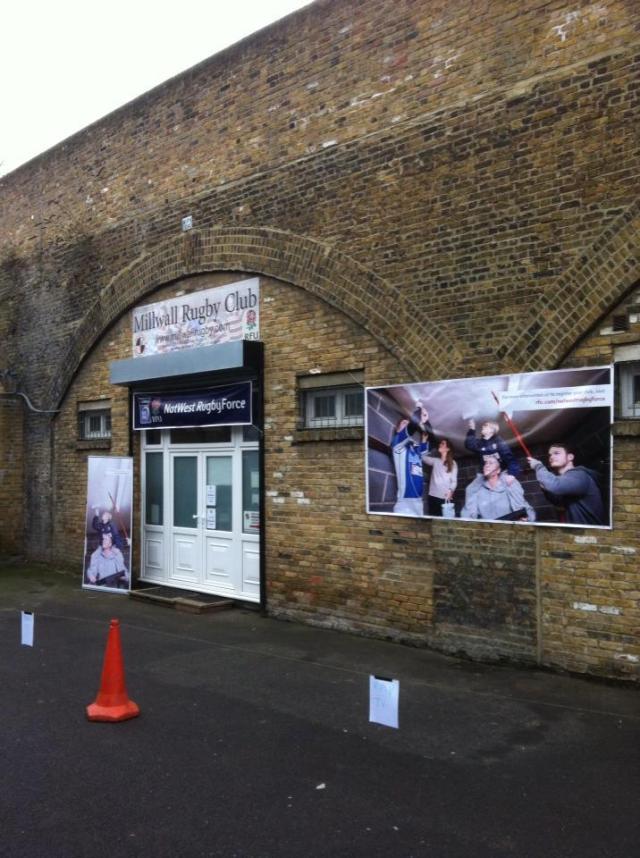 There has been talk recently of creating some kind of garden and walkway along the top of the arches, undoubtedly inspired by the High Line in New York. 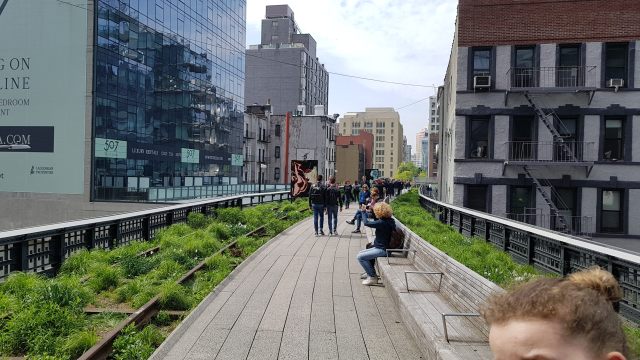 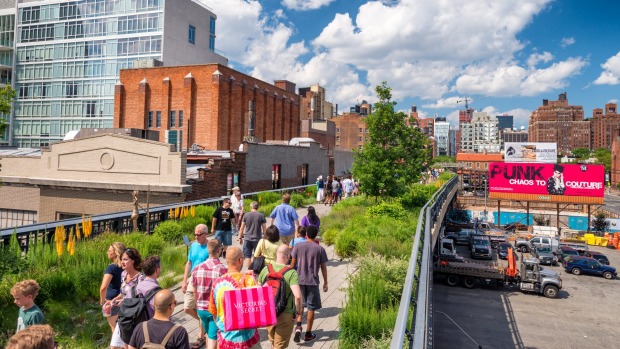 A great idea, and I hope that something can be created. However, the designers will have their work cut out, the arches are neither wide nor long.

Meanwhile, the weeds are back, doing their thing…. 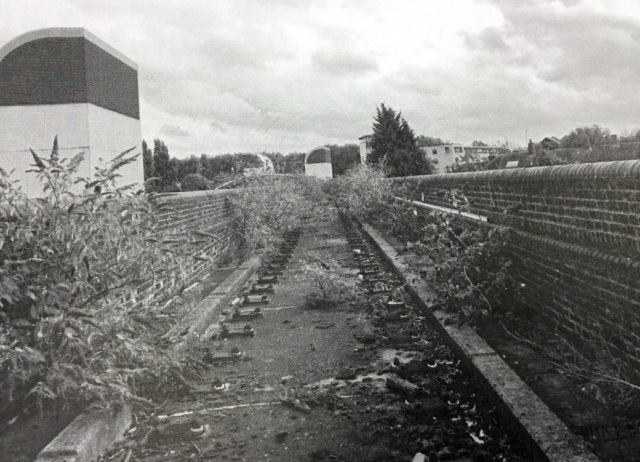 5 Responses to A History of The Arches in Millwall Park