The Isle of Dogs Housing Society was formed in 1930 and worked with the London County Council to find suitable vacant or (slum) clearance areas on the Island on which to build low rent homes for local workers.

A piece of land between Janet Street and Mellish Street, occupied by a few old houses and a derelict factory, was the first location chosen for building.

The LCC declared it as a clearance area to pave the way for redevelopment, and also provided funds to assist with the construction. The housing society built a block of 68 flats and named it St Hubert’s House.

The first section of the flats was completed in 1935, and…

…the tenants of Nos 12–34 (even) Janet Street could then be offered accommodation in the new flats, allowing the LCC to implement a clearance order in respect of these houses, to create room for the second phase. This was completed during 1936 and consisted of 44 flats and a shop.
– Survey of London

The following contemporary exterior and interior photos were all taken by the Isle of Dogs Housing Society, who later contributed them to the Island History Trust (the Friends of IHT website can be found at https://www.islandhistory.co.uk/). 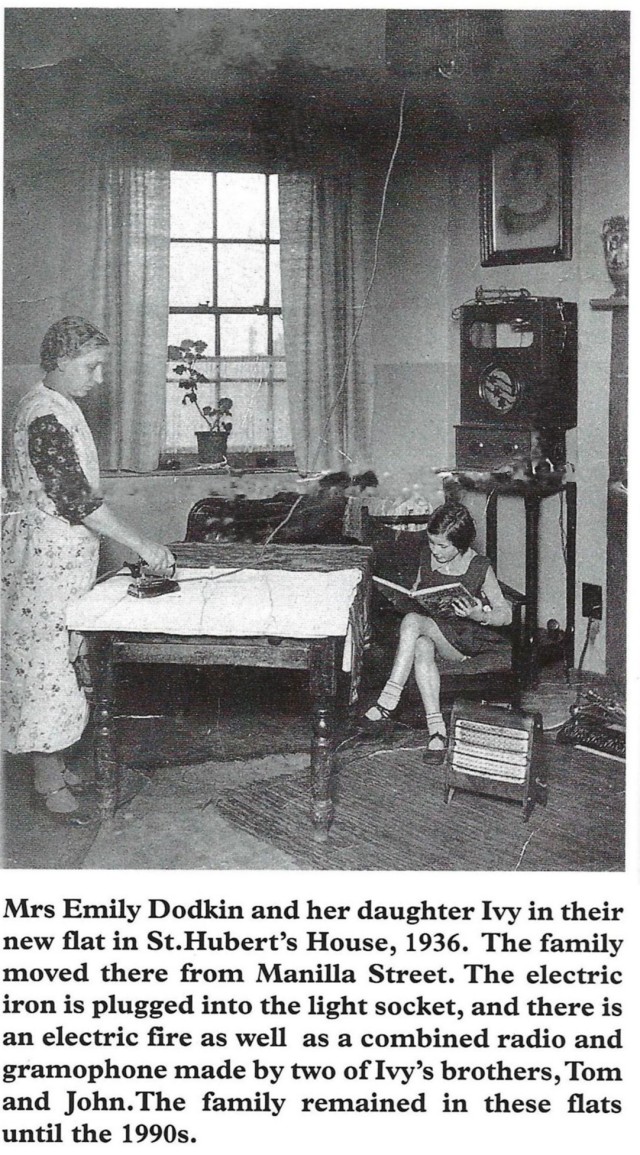 From an Island History Trust Newsletter 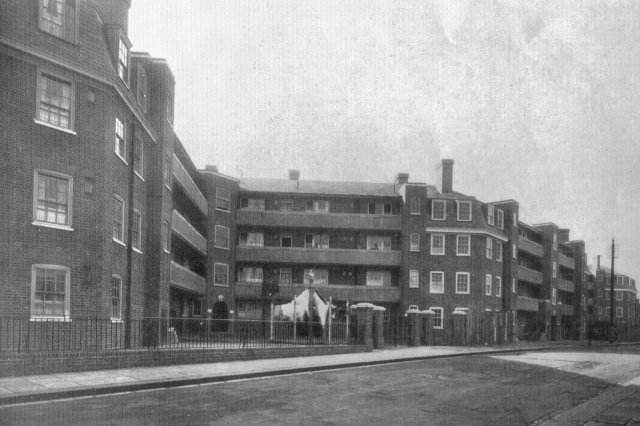 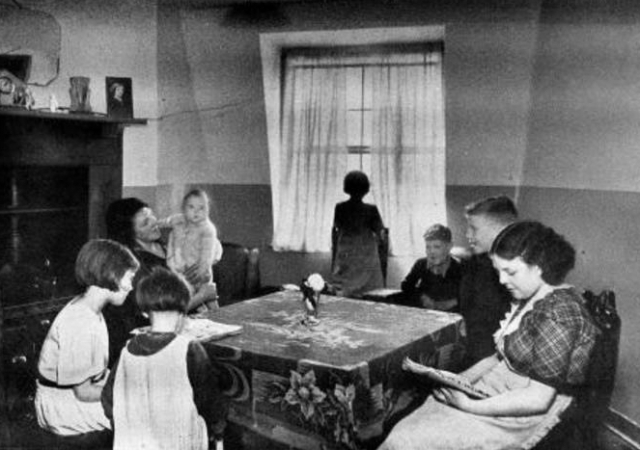 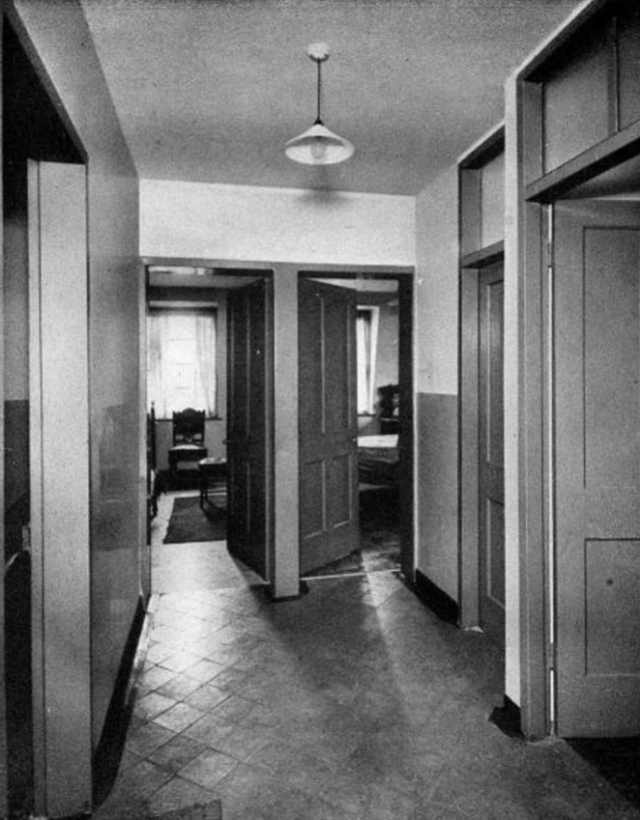 St Hubert or Hubertus was a Christian saint who became the first bishop of Liège in 708 AD and was the patron saint of hunters, mathematicians, opticians and metalworkers. According to legend, as he was hunting a stag, the animal turned to reveal a cross shining between its antlers while an other-worldly voice proclaimed a message to Hubert. Survey of London:

The zigzag groundplan … provides novel forms for the front courtyards (for use as drying areas) and rear communal gardens. In the centre of each courtyard is a concrete drying-post topped by a highly decorative finial with a coloured relief of a stag in the forest. 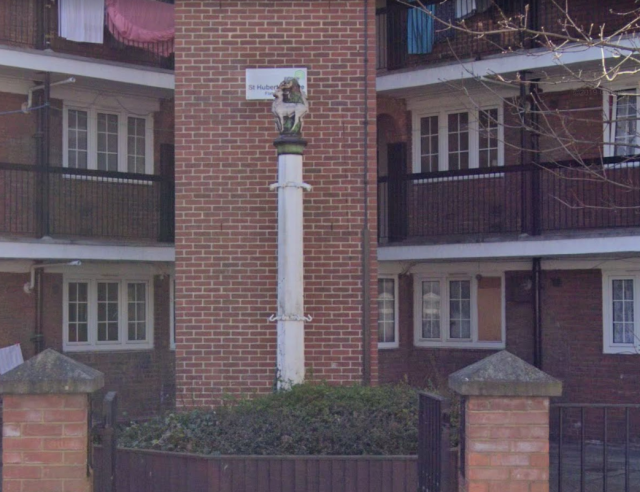 The foundation stone was laid on 29 May 1935 by the Rev. Basil Jellicoe, who had been the inspiration for forming the Isle of Dogs Housing Society….and the first part of the building was officially opened on 20 November 1935 by the Duchess of York (later Queen Elizabeth). 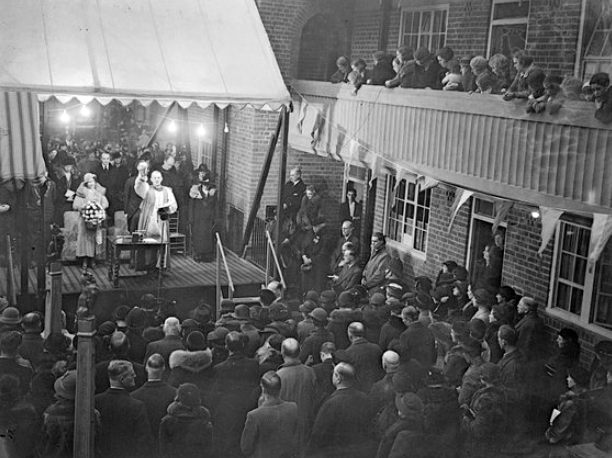 Public records such as censuses and electoral rolls give an incomplete picture of the names of the residents, but the names known to me  – most of whom were certainly among the first residents – were as follows in 1939:

No. 2.  Annie Jane, William Albert and William Charles Comper
No. 3. George Henry and Louisa Sarah Bennett
No. 5. Mary Ann French
No. 6. Alfred and Elizabeth Palmer
No. 7. Albert William, Alfred Edward, Annie Elizabeth Jr, Annie Elizabeth Sr, Robert Stephen and William James Bartlett
No. 8. Ellen and Harold Edward Batten
No. 12. Henry and James Bennett
No. 13. Emily, John, Robert and Thomas Dodkin
No. 14. Annie Rosetta and John Ernest Paine
No. 16. Albert Henry and Hilda Amelia Clack
No. 20. Ellen and Michael Lipman
No. 22. Charles George and Julia Ann Burton
No. 23. Alfred William and Robert George Hennis
No. 25. Joseph Collins
No. 26. Ivy Edith Lyddon
No. 27. Frank and Lilian Ada Coulton
No. 28. Albert and Henrietta Ball
No. 30. Charlotte Anne and Mary Ann Durling
No. 32. John Dunk, Alexander and Sarah Pepper
No. 33. Isabel and Solomon Adelman
No. 34. Daisy and William MacDonald
No. 35. Mary Ann and Robert William McAdam
No. 37. Daniel Samuel and Jessica Elizabeth Mantle
No. 38. Charles and Charlotte McCarthy
No. 41. Frederick and Minnie Bonsor
No. 42. Emma Alice and James David O’Leary
No. 43. Eliza Margaret and Rhoda King
No. 44. Horatio and Mary Jackson
No. 45. May Ada Hughes and Georgia Inkpen
No. 47. Charles Jr, Charles Sr and Helena Lapwood
No. 48. Alfred Edward James and Dorothy Crabb
No. 49. Archibald Victor and Eva May Judge
No. 50. Lilian Blanche Moore
No. 51. Alexander John, Ethel Margaret Louise and Mary Ann Miller
No. 52. Eliza and George Abbott
No. 54. Florence May and Leonard Frederick Pepper
No. 56. Annie Ellen and Frederick Arrowsmith
No. 57. Margaret and Thomas Nicholson
No. 58. Rosetta and William Hardy
No. 59. John and Kathleen Morgan
No. 60. Emily, May Jessie and William Arthur Marney
No. 62. Florence, William George Robert and William Henry Arthey
No. 63. George Arthur and Rose Lilian Baulkwell
No. 64. Elias and Ethel Hogsden
No. 66. Alice Lilian and Lilian Goss
No. 68. Eunice Jane and Henry James Judge

St Hubert’s House was relatively undamaged by bombing during WWII, while large sections of the surrounding area were completely destroyed. 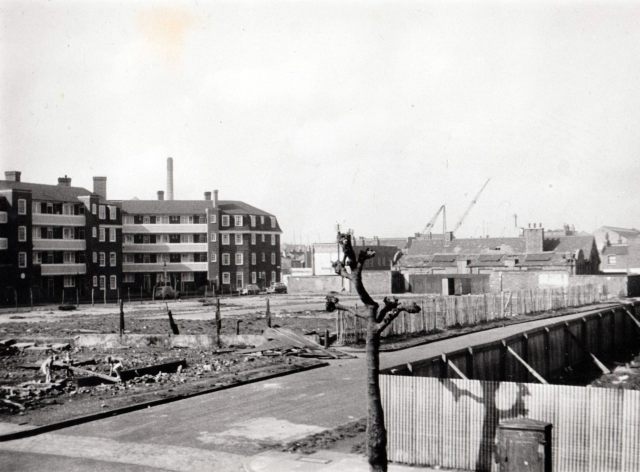 Circa 1960. In the foreground, the site of Millwall Central School

In the 1970s the flats were renovated and a number of extensions buit including two lift towers on the Janet Street side. Undoubtedly a welcome addition for residents, but they are not in keeping with the original architecture and are rather uninspiring blocks.

Still, it is one of the few old buildings still left standing on the Island…

2 Responses to A Short History of St Hubert’s House