Built at the end of WWII in response to the housing crisis, and intended to be temporary, prefabricated houses – prefabs – were a familiar site on the Island until around 1970.

The whole of the west side of Stebondale St, close to where I lived, was made up of empty prefabs by 1970, and I – like many kids – enjoyed a summer holiday spent smashing them up. I can still remember the smell of the asphalt roofs, the musty and dusty interiors, the ease with which we broke holes in the walls (brittle stuff, that asbestos, and we had no idea how dangerous it was), the shattered sinks and toilet pots.

I don’t recall any adults telling us not to do what we were doing. Nobody ever complained. The police never turned up to chase us off (except perhaps when asbestos was thrown onto a bonfire, causing a satisfying explosive crack when it reached a high enough temperature). The prefabs were not fenced off or secured in any way. They were just another part of the huge playground of derelict buildings that was the Island.

But, once upon a time, these derelict buildings were much loved by hundreds of Island families.

The Housing (Temporary Accommodation) Act of 1944 authorised the Government to spend up to £150 million on temporary houses.  This photo shows such construction in progress, before the end of the war, with Anderson Shelters visible in all rear gardens.

One of the designers for the Uni-Seco prefab, Dr Harold Rose..

The prefabricated panels were a sandwich with a wood-wool filling between sheets of corrugated asbestos-cement. The houses took eight unskilled men eight days to assemble. It sounds crude, but the construction industry learnt a lot about innovation and planning.   There was no alternative. There was no time to set up brick factories. I often ask myself why we don’t make similar buildings today for the homeless.

There were different configurations: side or front entrance, with or without entrance canopy, bathroom and kitchen at back or at side, and so on. The prefabs were delivered as flat kits to be assembled on site, save for the kitchen/bathroom unit which was ready assembled.

Prefabs were largely popular with their new inhabitants, boasting modern conveniences such as fitted kitchens with refrigerators, a compact plan and a number of built-in shelves and cupboards for storage; they were detached dwellings on large plots offering spacious gardens and a ‘country cottage’ ideal to former residents of tenements and terraces – English Heritage

Built in drawers and cupboards for storage were standard, as was a „fitted‟ kitchen. Crude by today‟s standards but nevertheless they had a gas hob, oven and refrigerator as standard.

Another feature, provided before washing machines became universal, was the „copper‟. The „copper‟ was a large metal bowl under which a gas flame could be lit to heat water for washing clothes. Manual labour was then applied using a „washboard‟.

A table that folded back into the kitchen wall was also provided in some of the homes.

The main living area had a solid fuel fireplace and grate, with a back boiler for heating hot water which was then stored in a tank, in the airing cupboard. The tank also had an electric immersion heater for heating water when the fireplace was not in use.

The fireplace, in the main living area was the only source of heat provided in the house, consequently the other rooms could be very cold in winter, and damp was a problem.

On some types, ducting for hot air from the fireplace to the bedrooms was provided, but was not effective. On cold winters mornings, some families would light the gas oven and open the door to heat the kitchen, which became the main centre of activity.

Poplar Borough Council applied for 2000 of these prefabs and, in September 1944, constructed three different types in Glengall Grove for demonstration purposes. The selected prefab was of the Uni-Seco type, produced by the London-based Selection Engineering Company Ltd, and based on a military wartime office design.

The first family to move into one of the demonstration Uni-Seco prefabs in Glengall Grove were the Greens. The council started laying concrete bases for others before the end of the year.

Poplar Borough Council gave priority prefab residence to families made homeless by the war and living in unsatisfactory conditions. They set the rent at 9s 3d, increasing it to between 12s 3d and 12s 9d in 1953.

There were three areas of prefabs on the Island in 1950: in North Millwall, around Stebondale St, and – by far the largest – the Glengall/Samuda area.

Peter Wright spent a significant part of his childhood in a prefab in Tooke St, and remembers it fondly.

Our prefab was built on the bombsite that resulted when a massive parachute mine dropped on Tooke St on 7th September 1940, destroying The Islanders Pub and surrounding houses. Four prefabs were built in Tooke St….ours being no. 4,  next to no.2 just behind Betts Butchers and 2 more on the other side of the road next to where the pub stood.

The side of no. 4 Tooke St was never built on so we had a large area to the side of us, albeit filled with bomb rubble, discarded gas masks, air raid wardens helmets etc.

The move was carried out using one of Ike Emms barrows with the last load carrying the coal from our old shed in the garden behind the dock fence of Alpha Grove to the new garden of the prefab, neatly piled behind an old upturned Anderson shelter corrugated panel.

Coming from an old upstairs dingy roomed Victorian Terraced house to a fairly new prefab in 1955 ….a nice sized bedroom, bathroom and toilet was quite something. Light, airy and fresh new home…..gone were the dark passages, staircases, and the old tin bath. In through your own front door, and a nice wide garden.

Our sideways facing front door led to a nice open hallway with a toilet and bathroom leading off it….a sharp right doorway led to the square nice sized front room with plenty of light coming in from the front wrap around two sided front windows, a neat fireplace with a half round marble hearth and micre panelled hinged fireguard doors. The ample kitchen coming off the living room complete with small gas fridge and foldaway dining table was accessed off the front room through a characteristic glass partition, a door at the other end of the kitchen led to the side of the house.

Dad took pride in our new home and immediately spruced up its appearance with a coat of paint all around. I suppose our prefab would comfortably house a family of say 2 to 3 children…we managed quite well with us four kids in the second bedroom but had to lose space to a large 78 rpm record collection and the family piano. 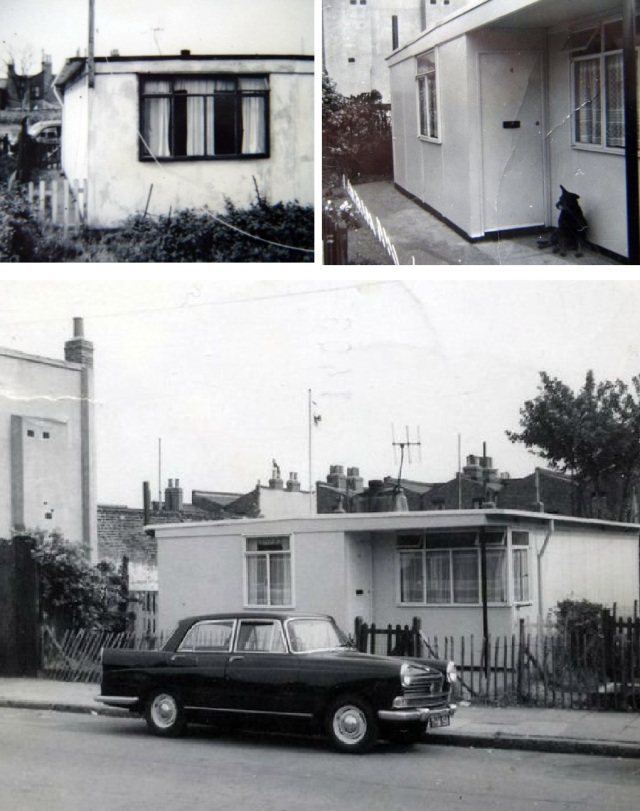 The same prefabs featured in a short scene in the 1960s film ‘Saturday Night Out’, significant parts of which were filmed in the area: 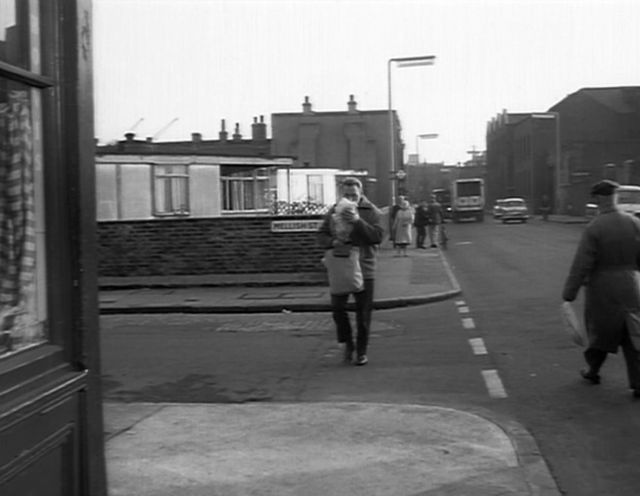 Prefabs at the junction of Mellish St and Westferry Rd.

The following aerial photo shows the northern part of the area covered by the map:

Post-war Stebondale St, at the junction with Glengarnock Ave (the ‘S’ sign is pointing the way to the air raid shelter under the arches in Millwall Park):

View from Manchester Rd (approx. at location of later Galleon House) over wasteland to the prefabs on Glengarnock Ave. Also visible are the back of the houses on Parsonage St, and the mudchute on the horizon: 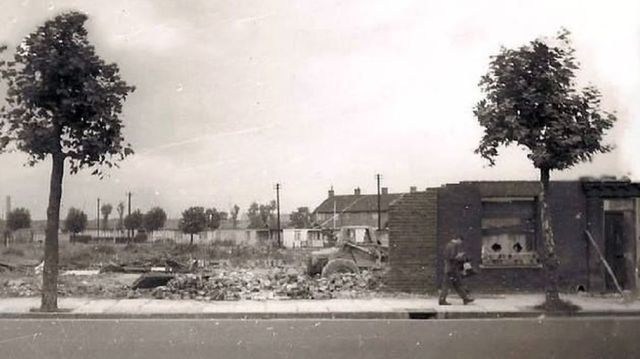 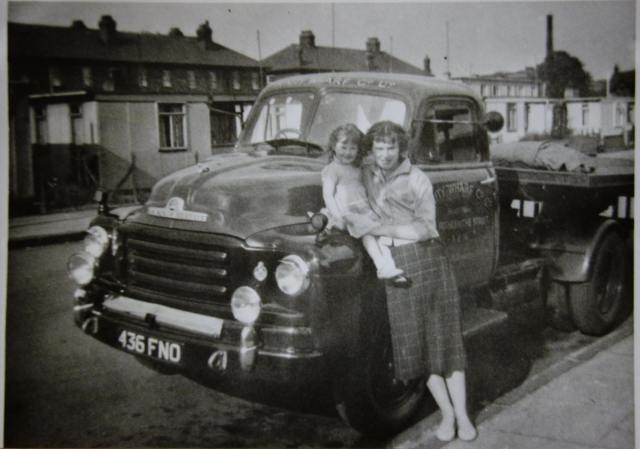 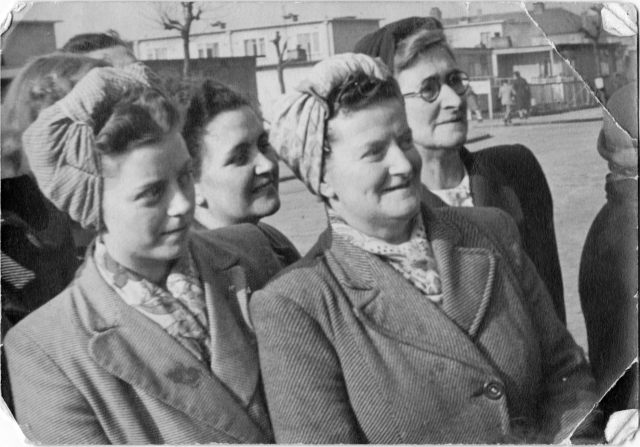 A rare colour image of prefabs – a screenshot taken from a Price Family cine film showing the prefabs in Manchester Road near Christ Church.

This was by far the largest area of prefabs on the Island (and perhaps in the UK as far as Uni-Seco prefabs are concerned). This photo, taken from Glengall School and looking over Glengall Grove towards West India Docks, shows perhaps half of the area, giving a good idea of its size.

Here is the entire area in an aerial photo: 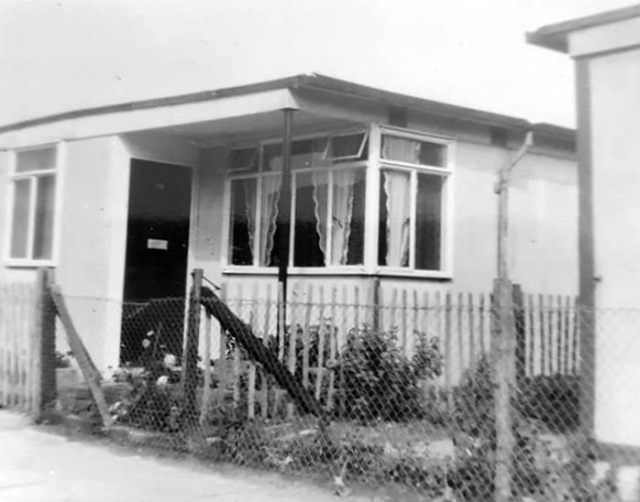 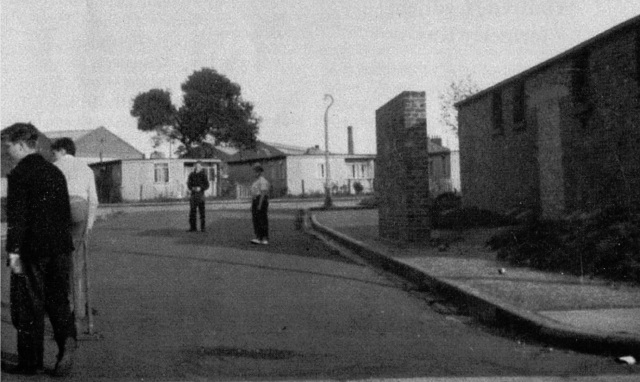 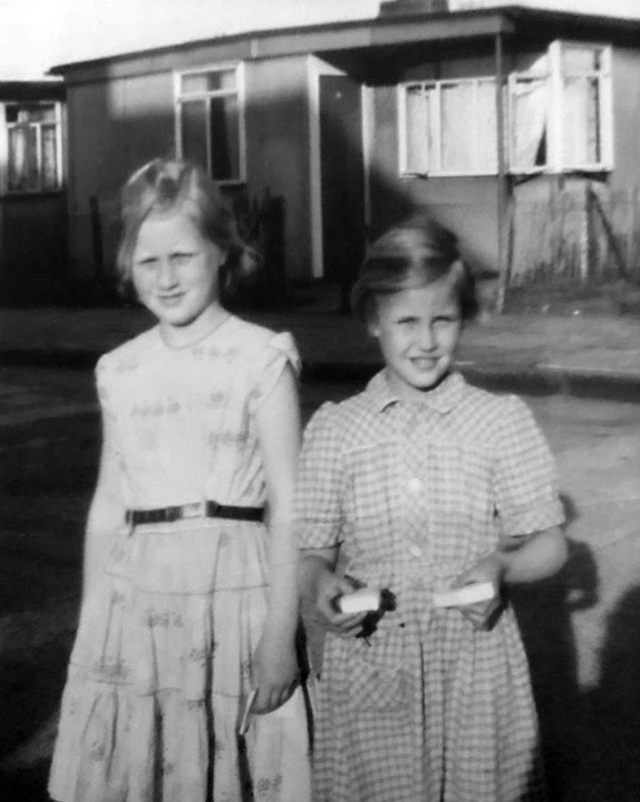 Emily Stevens (nee Barry) and her husband Arthur Stevens outside their newly built prefab. Like a lot of other people they had been bombed out and had lost everything. Photo courtesy of their granddaughter Karen Amber. 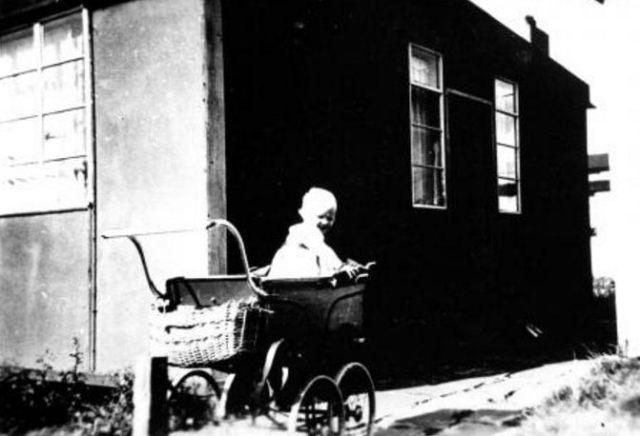 East Ferry Road, at the corner with Glengall Grove

In 1952 the first of the Borough’s prefabs was demolished. Although the Borough intended to demolish them all as soon as possible, and rehouse tenants in new homes, economic challenges led to a slowdown in council house building, and by 1965 there were still 323 prefabs in the borough.

However, the prefabs proved themselves not all able to withstand the ravages of time. Peter Wright reports:

Towards the end of our time there in 1964 the walls became damp, so much that outside vegetation had reached the inside walls and was sprouting up behind the wallpaper.

Stories of the damp, rat-infested prefabs in Stebondale Street appeared in the East London Advertiser in the late 1960s, and action to demolish the prefabs in Poplar was increased. 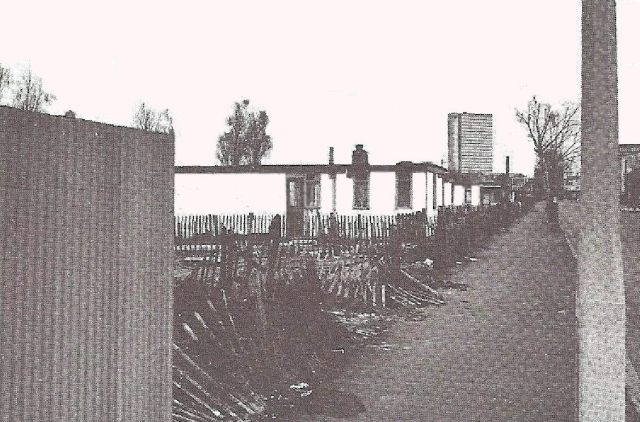 c1971. Demolition had started in Stebondale Street (sorry about the quality)

Rear of Manchester Road prefabs. Photo taken from Stewart Street. The base of an already-demolished prefab is visible on the right. (Island History Trust)

Site of demolished prefabs. Looking over Manchester Road towards St. Luke’s School (or Cubitt Town School, I’m not sure if the schools had already moved by the time of this photo). 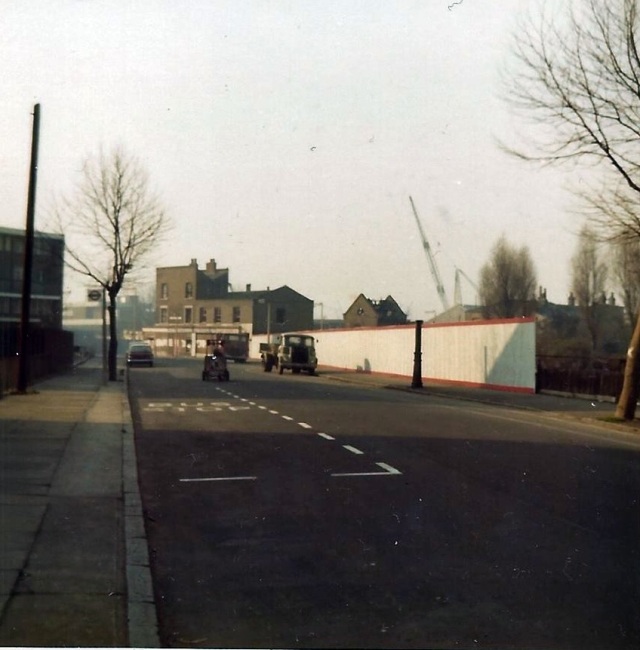 The last prefab in Poplar was demolished in 1977, 33 years after the construction of the first ‘temporary’ home.

Some of the prefab sites today….

This entry was posted in Uncategorized and tagged prefabs, Stebondale St, WWII. Bookmark the permalink.