The Windmills of Millwall

The embankment (or ‘wall’)  down the west side of the Isle of Dogs was an ideal place to build windmills as the open expanse of water and marshland to the west meant there was no obstruction to the prevailing westerly winds.

Gascoyne’s 1703 map, ‘An actuall Survey of the Parish of St. Dunstan, Stepney, alias Stebunheath’ shows seven mills along the top of the embankment (which was originally known as Marsh Wall, but was later more commonly known as Mill Wall). 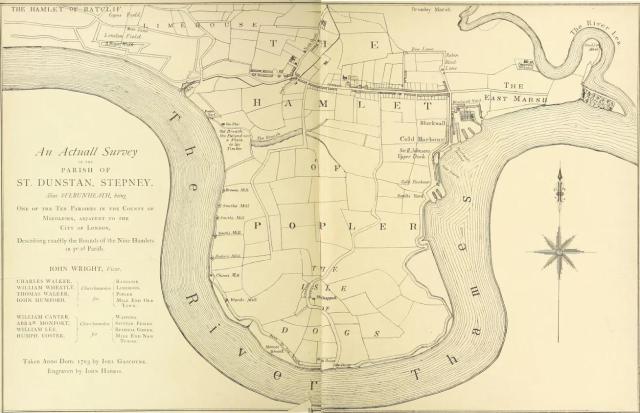 However, at various times, there were at least twelve windmills on the Island. There were few other buildings on the Island, and the prominence of the mills meant that they were also used as navigational aids by Thames shipping, even appearing on charts.

1750. Thames navigation chart showing nine windmills, the most northerly of which – the Lead Mill – was in Limehouse. Click for full-sized version

Island windmills are also represented on paintings and etchings whose viewpoint was the top of the hill in Greenwich Park,. They give a good impression of just how empty the Island was at the time.

Nearly all the mills were of the same type: post mills, the earliest type of European windmill whose defining feature is that the whole body of the mill that houses the machinery is mounted on a single vertical post, around which it can be turned to bring the sails into the wind. 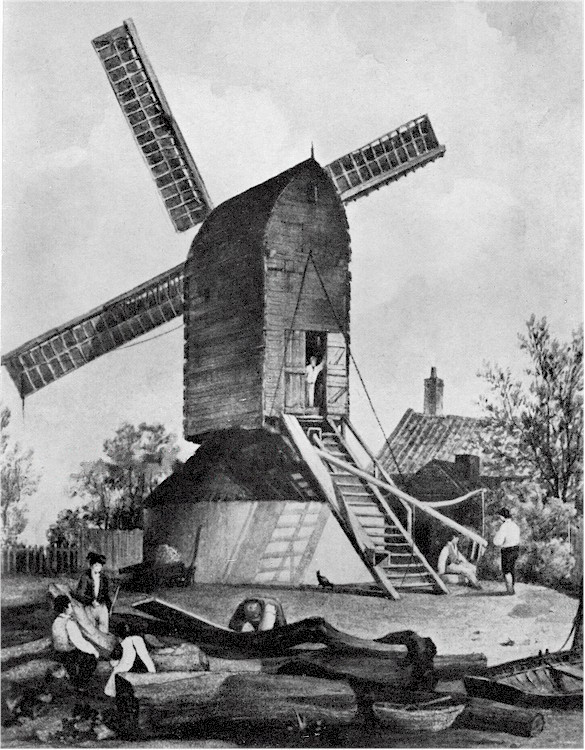 At least two of the mills were ‘smock mills’, a type of windmill that consists of a sloping, horizontally weatherboarded or thatched tower, topped with a roof or cap that rotates to bring the sails into the wind. This type of windmill got its name from its resemblance to smocks worn by farmers in an earlier period

1830. Unidentified smock mill, possibly Theobald’s Mill. Deptford is visible in the background on the right.

It is difficult to establish the precise locations of many of the windmills: early maps and descriptions were not accurate in their positioning or naming, compounded by the frequent renaming of mills when the owners changed. After much comparing of old maps and paintings and documents, I am quite confident of the locations of these eleven windmills (give or take a few yards).

The following information is mostly from the Survey of London:

The First Mill – so called from its topographical position – was built in 1730 at the southern edge of ‘The Breach’, the area of land that was inundated with water after a failure of the river embankment in 1660 (see here for article). The mill changed hands a number of times and it was last used for seed-crushing before the premises became part of Sir Charles Price’s oil mills in 1805. The mill was converted into an oil refinery.

The Second Mill was built in 1710 and was demolished approximately a century later. Survey of London:

This was built … by … William Lea, citizen and fishmonger of London, to Robert Smith junior of Stepney, miller, for a consideration of £10 15s and at a rent of £2. The 80ftwide site had a river frontage of 150ft. A peculiarity of the lease was a clause denying access from the rest of Lea’s land, the intention being that the occupiers ‘are to Goe to and Come from the same from off the River of Thames only’; a further covenant banned ‘geese, ducks, turkeys, cocks, hens, or any other sort of fowls whatsoever’ from the premises.

The Third Mill was built in about 1679, the earliest known among the riverside mills on the Isle of Dogs. It was demolished in 1785.

Three Smith’s Mills were built in the 1690s by Robert Smith, a Rotherhithe miller, probably the Robert Smith later known as Robert Smith senior of Poplar. The southernmost of the three mills is visible in an 1812 painting by Thomas Whitcombe….

Baker’s Mill, named after the first owner, Rotherhithe miller, Nicholas Baker, was built in 1694 and demolished around 1770.

Chinnall’s Mill, built in 1695 and remained in use for approximately 100 years.

The Ninth Mill was built around 1718 and is sometimes named on maps as Little Mill or Tommy Tinker’s Mill.

Theobald’s Mill (aka Ward’s Mill) was built around 1701 and was later the site of a public house, ‘The Windmill’. The mill and surrounding buildings burned down in the 1880s. 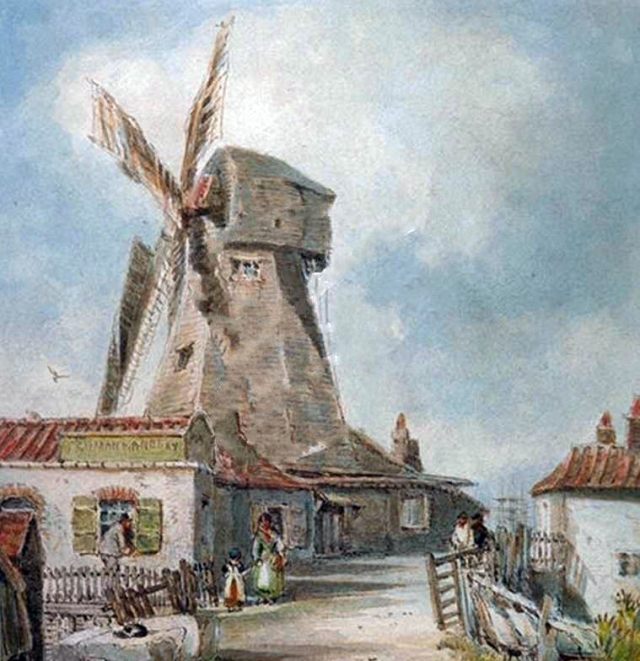 The Mill at Drunken Dock was built in about 1712 . The site was later occupied by the Mast House.

Many paintings and etchings were made of the windmills over the years, but it remains difficult to identity which windmills are the subject. Here, a selection…. 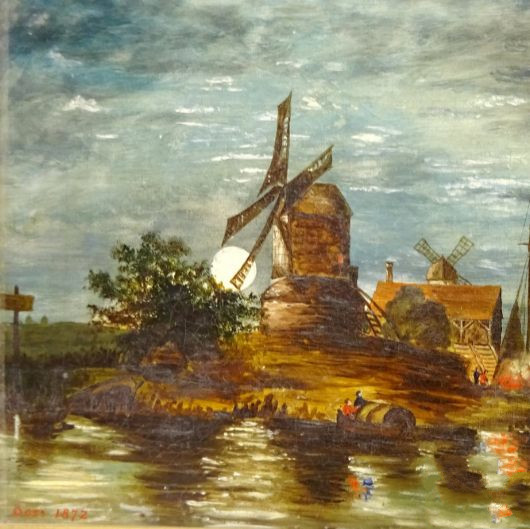 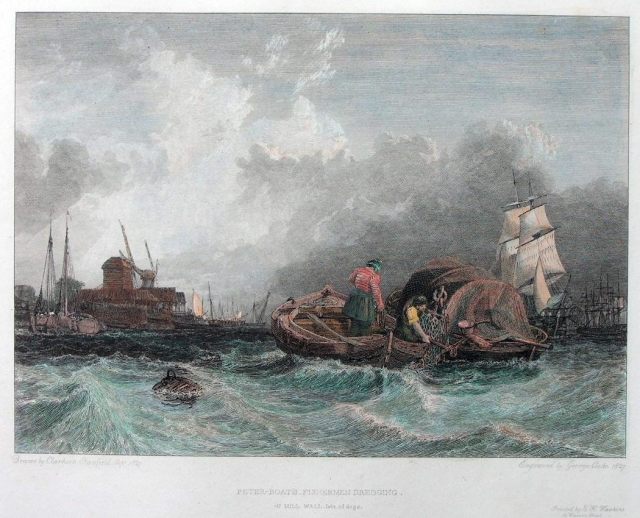 5 Responses to The Windmills of Millwall