Dudgeon’s Wharf – You Couldn’t Make It Up

The history of Dudgeon’s Wharf is one of civil war, blockade running, disastrous ship launches, bankruptcy, fire, insanity and – in 1969 – the terrible explosion that claimed the lives of 6 men. My teenage years were spent just a couple of hundred yards from the site of their wharf at the north end of Saunders Ness Rd (formerly Wharf Rd), and I had no idea of its remarkable history.

Like many of the great Victorian engineers, especially on the Island, John Dudgeon (1816-1881) and William Dudgeon (1818-1875) were Scottish. After starting their career as blacksmiths, they moved south to gain experience with some of the leading engineering companies of the age. The Isle of Dogs at that time had a very high proportion of Scottish residents, as witnessed by the Scottish church St Pauls, and the numerous Islanders with Scottish ancestry even as recently as the end of the 20th century.

In the 1851 census, William was reported as living in Albert’s Place – a very modest row of terraced houses on West Ferry Rd – approximately opposite Moiety Rd – along with his wife Emma and 2 yr-old daughter Mary. His profession is given as ‘Engineer’. 10 years later he is reported to be a widow, and yet another 10 years later, in the 1871 census, he was living in the much more well-to-do Vanbrugh Park in Blackheath.

(A few years later, the nearby, mock-gothic Vanbrugh Castle would be purchased by Alexander Duckham, the oil merchant who also started his business life on the Isle of Dogs, on Phoenix Wharf.)

John, meanwhile was Inspector of Machinery for the Board of Trade in 1851, and living in Ratcliffe, Stepney with his wife and two sons. In 1861, he was Marine Engineer Master, living with his growing family in a grand house in Northfleet, Kent along with assorted cooks, servants and maids. There they remained there for at least the next 10 years.

In 1856, John and William had set up the The Sun Iron Works on Lollar Wharf, off the West Ferry Rd opposite the Tooke Arms. One of their first contracts was to build an engine for the Thunder, a ship designed by John Dudgeon and being built by Messrs Lungley in Deptford.

The Thunder was launched in December 1859, and soon demonstrated that she was the fastest steamer yet provided with a screw propeller. She was a handsome vessel, ship-rigged, with clipper bows, and her masts and funnels had a slight rake which gave her a very attractive appearance.
R. A. Fletcher – Steamships, the Story of their Development to the Present Day (1910)

In 1861 the brothers went into shipbuilding themselves, at a yard directly south of Pier St (which at the time crossed Manchester Rd). 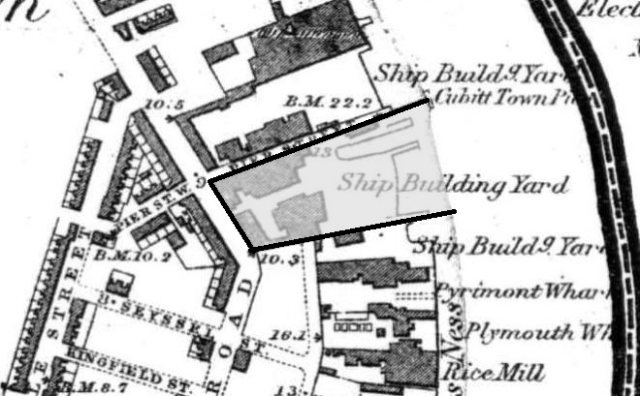 The Dudgeons were the first to build significant numbers of vessels with (independently driven) twin-screw engines and to demonstrate their worth. 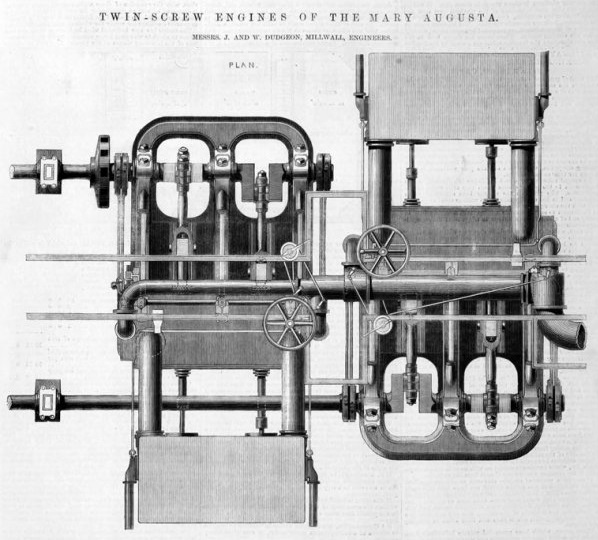 The first ship they built was the 150-foot Flora, the first twin-screw steamer to cross the Atlantic Ocean.

The innovative twin-screw design allowed much faster and fuel-efficient steamships to be built, The result was fast and highly manoeuvrable ships with low draughts that were ideally suited for events taking place on the other side of the Atlantic Ocean.

A few days after the American Civil War broke out on April 12, 1861, President Lincoln announced a land and sea blockade of the rebellious, southern states. The newly formed Confederate States of America had only 35 ships in its navy, and turned to privateers to penetrate the blockade, using fast steamships that could outrun the Union ships.

These vessels would carry cargoes to and from neutral ports often located in Nassau and Cuba where neutral merchant ships would handle the transatlantic transport. Ships bound for the Confederate states usually carried badly needed supplies and mail, outbound ships often exported cotton, tobacco and other goods for trade to Europe (primarily to Britain, which had vast cotton business interests).

The Dudgeon brothers exploited this situation and specialized in the manufacture of fast twin-screw blockade runners for the Confederacy, at times employing up to 1500 men at their yard between Manchester Rd and the river.

One of the most famous Dudgeon-built blockade runners was the CSS Tallahassee. Originally developed for the opium trade in China, the Tallahassee was converted into a second class gunboat, retrofitted with a 100-pounder rifle, 32-pounder rifle, 30-pounder Parrot rifle and a brass howitzer. She became famous for events that took place close to the end of the Civil War.

During a brilliant 19 day raid, from her home port of Wilmington, North Carolina, and return, the Tallahassee created absolute havoc with Union commerce along the Atlantic seaboard. In this short period, she destroyed 26 vessels and captured 7 others that were bonded or released. The 13 knot, twin-screw, man of war, with a complement of 120 officers and men, had sailed in early August to engage in this mission of destruction.

The cruiser’s Master was Captain John Taylor Wood, a grandson of Zachary Taylor, 12th President of the United States. Captain Wood appears to have been well connected, because he was also a nephew of Jefferson Davis, who at the time was President of the Secessionist States.

Unlike many firms on the Island, J & W Dudgeon survived the economic crisis caused by the collapse of the Overend, Gurney & Co. bank. In fact, they had so many outstanding ship orders that in 1869 they took over the disused yard to the south, bordering Pyrimont Wharf.

However, the company was to suffer a fatal blow in 1874, with the disastrous launch of their 70th ship – the 300 ft long frigate Independencia for the Brazilian Government. The Dudgeons attempted to launch her on 16 July but she stuck fast and did not budge. A second attempt was made on 30 July during which the ship got about one-third down the slipway and stuck, extensively damaging her hull plating.

As reported in the Times:

She was finally launched on 10 September after she had been lightened. The contract for the vessel’s repair and refitting went to the rival firm of Samuda Brothers. After a year of sea trials with the Brazilian navy, she was acquired for the Royal Navy in 1878 and renamed HMS Neptune. Her commission ended in 1903, and while being towed to the breakers, she unintentionally rammed HMS Victory, collided with HMS Hero, and narrowly missed several other ships. The accident-prone ship was scrapped in Germany in 1904.

The cost of the botched launching resulted in the bankruptcy of the Dudgeons in 1875. William Dudgeon died in the same year.

Drawing from “The Engineer”

Both events took a serious emotional toll on John, who was declared insane. The census of 1881, the year of his death, has him residing as a patient at a private “Lunatic Asylum” in West Malling, Kent.

From Shipbuilding to Oil Storage

Dudgeon’s Wharf was taken over in 1882 by City oil and petrol merchants Ingall, Phillips & Company. They extended the wharf and built a large number of circular storage tanks, many of which were below ground level. But, just two years after this massive investment, they made a miscalculation that led to their bankruptcy. New York Times:

London, 27 Dec. 1884. The failure of Ingall, Phillips & Co., the great wharfingers of St. Mary Axe, with liabilities amounting to $1,000,000, has completely demoralized the oil trade in London. They had a corner in turpentine which promised to be very profitable, but they were short on petroleum to the extent of 30,000 barrels, and the rise in petroleum [prices] sent them to the wall. Their failure will doubtless embarrass the market seriously on Monday. Petroleum traders predict a catastrophe owing to the want of confidence in wharfinger warrants caused by the failure. Hitherto wharfinger warrants have been considered above suspicion, and have been looked upon as equal to bank notes for the value, at current rates, of the amount of oil represented on their face.

By 1885 the premises had been taken over by the newly-formed London Oil Storage Company, and in the following year a serious fire broke out on the site.

The conflagration – as serious as it was – did not mean the end of the company, and in 1918 it was taken over by London & Thames Haven Oil Wharves Ltd (although it continued to trade with its original name). 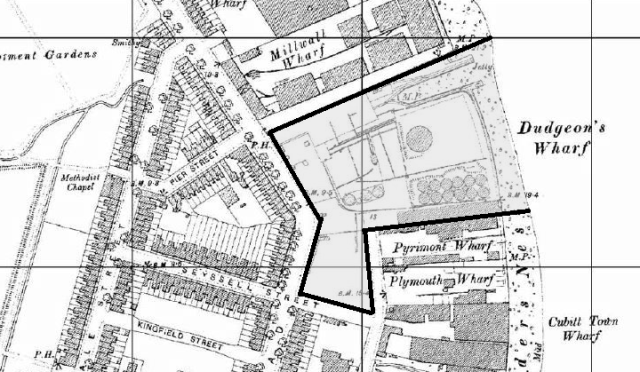 Turn of the century

The next few decades passed uneventfully, although it was a close thing in the evening of 7th September 1940 – the first night of the blitz – when a high explosive bomb dropped close to the wharf. The fire brigade’s log of the incident reported only some damage to brickwork.

Perhaps it’s accurate to say that WWII was one of the periods when the wharf enjoyed good fortune. Bombs dropped all around, but its over 100 tanks with capacities up to 20,000 gallons remained unscathed. It was a close thing though – as this map reveals – buildings destroyed or damaged beyond repair by bombing are marked in red:

In 1951, operations stopped at Dudgeon’s Wharf, which remained empty for many years before demolition work commenced. It was during this work that tragedy struck on 17th July 1969:

The demolition was rife with danger and difficulties and firefighters had frequently attended the site after sparks from cutting gear ignited small fires.

Less than two weeks before the fatal explosion, 40 men with eight pumps had tackled a fire on waste oil in a derelict tank and now another call arrived at Millwall Fire Station at 11.21am alerting the emergency services to another fire.

Two appliances were sent from Millwall in F Division and another from Brunswick Road. A foam tender from East Ham was sent later along with a fireboat from Greenwich.

Station Officer Innard, believing the fire to be out when he arrived, decided to put a curtain of water into the open top manhole of Tank 97.

Four other officers joined him on top of the tank to feed in the water. Later reports concluded that this pull of water drew air into the tank, mixing with the flammable vapours.

S.O. Innard then decided to ensure there was no further fire by opening the bottom manhole. Unable to find a spanner to undo the nuts, it was suggested they should be burned off.

As soon as a workman applied the cutting flame of his torch to the first nut, the vapours inside the tank ignited immediately, blowing the roof off the tank, together with the five firefighters and a worker.

The explosion happened at 11.52. Three appliances were sent from Bethnal Green and Bow. Their role was to collect the bodies.

The victims were named as:

This was the largest single loss of life in the London Fire Brigade since the Second World War.

Photos taken in the 1980s by Mike Seaborne, showing a cleared Dudgeon’s Wharf.

The site was later developed for housing. The street names have a nautical theme (Chichester Way, Mariner’s Mews, Sextant Avenue, etc), but none reflect the history of the wharf. Perhaps it was something to which the developers would rather not draw attention.

Dudgeon’s Wharf in the 21st Century

On Thursday 24th December – more than 40 years after the event – a plaque commemorating the victims of the 1969 explosion was unveiled by London’s fire commissioner Ron Dobson at a service on the former Dudgeon’s Wharf. 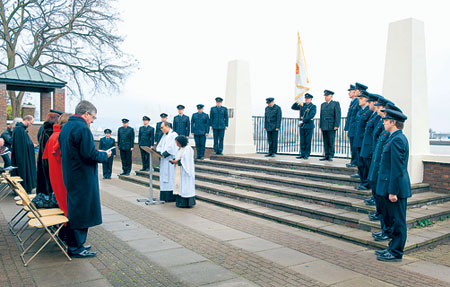 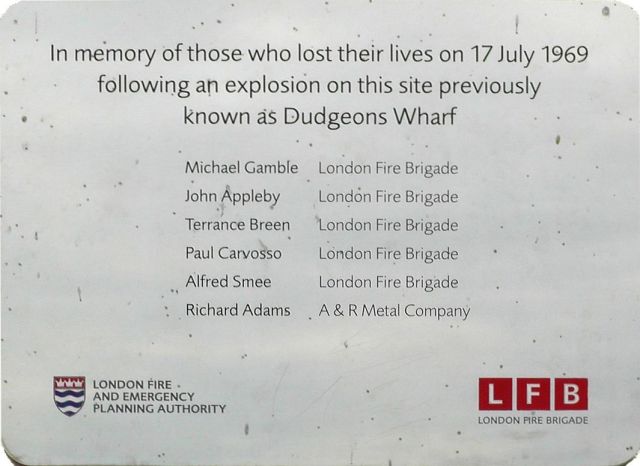 The unveiling was 150 years to the month after the launch of Dudgeon’s first commercial success – the steam ship Thunder in December 1859.

This entry was posted in Uncategorized and tagged Dudgeon's Wharf. Bookmark the permalink.