Posted on February 8, 2014 by Mick Lemmerman

During WWII, Poplar Borough Council built prefabs as a partial solution to the loss of housing due to bombing. However, being detached bungalows, prefabs were not an efficient use of space, and by the end of the war the council was investigating how to quickly and cheaply build two-storey, terraced houses. Messrs Orlit Ltd of Buckingham Gate proposed prefabricated houses constructed with precast reinforced concrete (PRC), designed by the Czech architect Ervin Katona who had immigrated to England in 1938.

The council looked for sites to build the “Orlit Houses”, by way of experiment. They specifically looked for sites that were ‘gaps’ caused by bombing in regular housing schemes; they wanted to efficiently fill those gaps, and not build whole housing estates of Orlit homes. The selected plots on the Island were Alpha Grove (9 homes), Billson St (20), Cord Way (6), Mellish St (3), Parsonage St (8) and Tiller Rd (2).

In 1945, German and Italian prisoners of war were drafted in to clear the sites, and construction commenced in November. In the following image, a still from an Imperial War Museum film (link below), 3 ft foundations have been prepared for the houses on Parsonage an Billson St. In the background on the left is the Builder’s Arms pub which backed on to Millwall Park on Stebondale St.

We lived in the middle cottage of the only five remaining houses standing in Billson Street (we were bombed out of Stebondale St). My nan sent big tin jugs of water over to the prisoners. She said they were some mothers sons, she had sons in the forces and if they were taken prisoner she would like to think someone would at least give them something to drink. Over the road in the Orlits I remember the Hales, the Mitchells and Davis rings a bell. My mum and me had to move out when my uncles were demobbed. I lived in a prefab at the end of the road when I was married. – Patricia Catherine Featherstone. 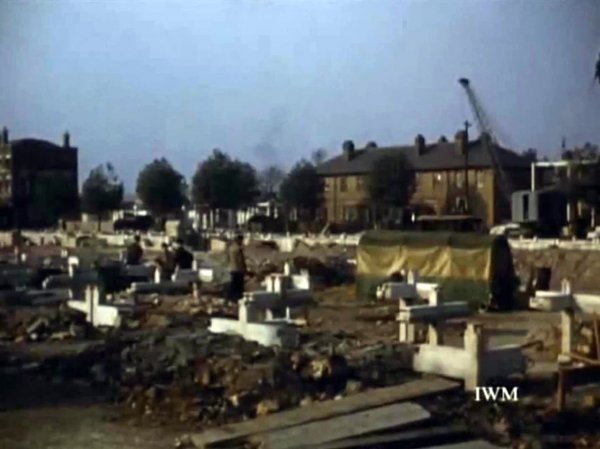 Next, a precast concrete frame was assembled on the foundations. Columns were manufactured with brackets that allow them to be tied or ‘stitched’ to horizontal beams that carried the floor, roof and ceiling finishes. Once the connections were made the resultant joint was encased in concrete. 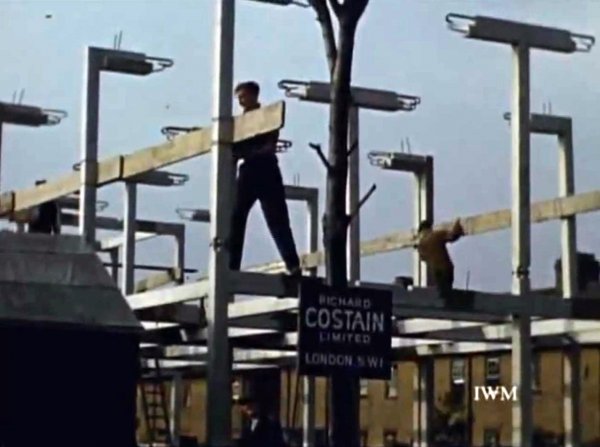 And the frame was clad in precast concrete panels. The external walls had a cavity construction, with two layers of 2½ in. thick concrete blocks which were tied together with galvanized metal ties. 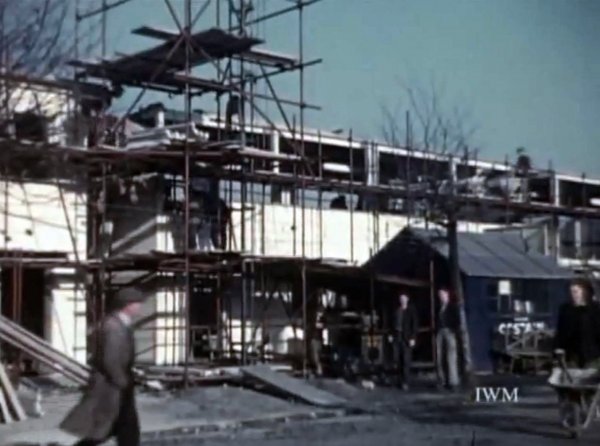 The flat roofs were also constructed from concrete slabs, and then covered with screed concrete of varying thickness to create water run-off. The roof was finished with either asphalt or bituminous felt. 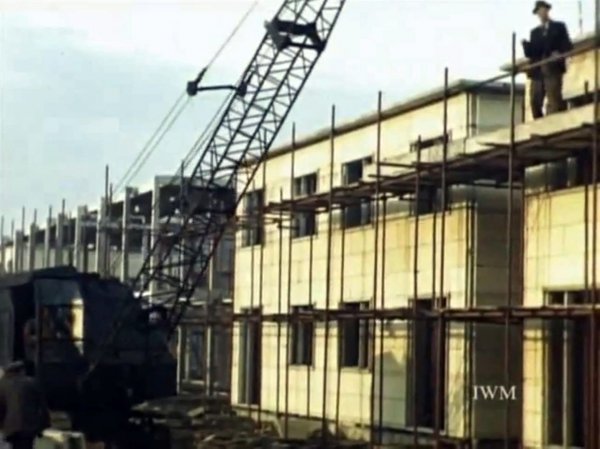 In February 1946, after a construction lasting just 3 months, the first semi-detached pair of homes was officially opened in Billson St by Alderman C. W. Key, MP for Bow and Bromley, and Parliamentary Secretary to the Ministry of Health. 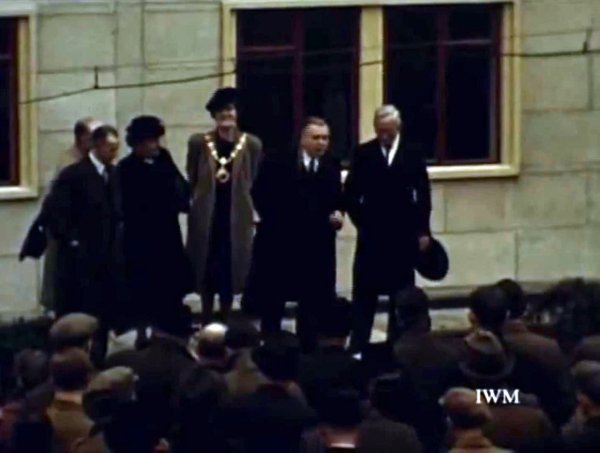 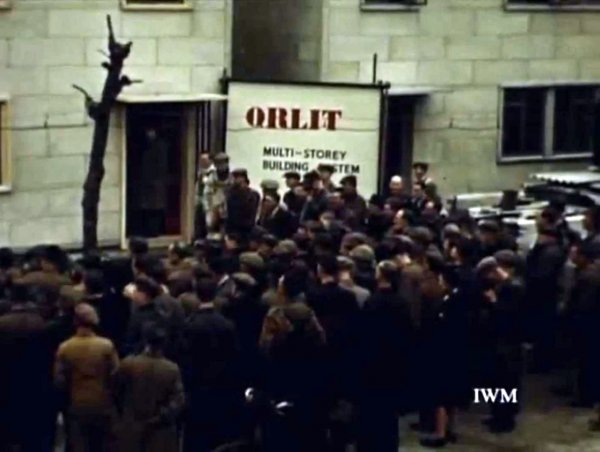 The first proud family were Ann and John Atheis and their children who moved into number 16. They were undoubtedly happy with their three bedroom home with living-room, kitchen, bathroom and WC. Cookers and wash-boilers were provided, the costs of which were added to the rent. 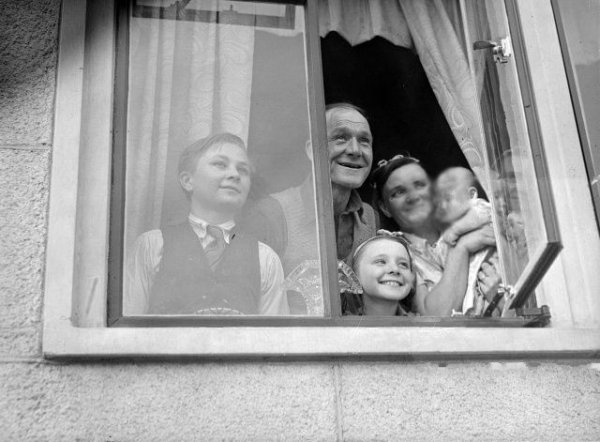 The Atheis family poses for the photographers on the official opening day.

I remember the Atheis family, not so much the parents, but one of the daughters. The Smiths lived at 17 and at no 15 was the Rose family when I lived there. The Mitchell’s lived next door to us at 21. – Brenda Macey

They are double skinned cavity,the materials are almost indestructible but has metal ties….some have cellars according to how deep bomb craters penetrated, those without have a base slab supported by bricks from the old houses. Tend to be draughty but strongly built, special drills needed to drill a hole in the wall as they are so tough. DC round pins plugs all replaced and updated in the 60’s to square pin AC – Peter Wright.

A film made of the construction and official opening of the Orlit houses on Billson and Parsonage St can be seen here.

In July 1947 work started on a three-story block of 12 flats on Mellish St, built also with Orlit design and materials, named Rawalpindi House after the Armed Merchant Ship Rawalpindi which was sunk by German warships in 1939. According to the Architects’ Journal, this was the first block of precast concrete-framed flats to be built in this country. It was officially opened in March 1948. The following British Pathe film shows the finished flats and opening ceremony (opens in a new window). 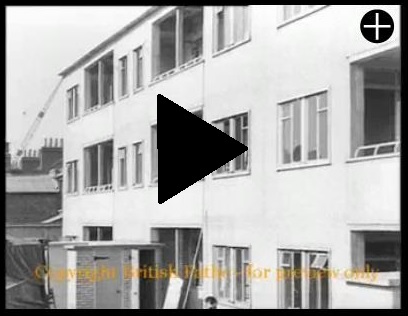 Film of opening of Rawalpindi House

It was not until 1951 that the Borough Council finally agreed terms for the purchase of the 54 Orlit houses and flats on the Island. The total price for the houses was £60,000, making the latter, in comparison, an expensive experiment. In addition, remedial works were already needed, estimated to cost a further £8,000.

In the early 1980’s, a precast reinforced concrete house (not an Orlit) in Leeds burned down. Its method of construction did not in anyway contribute to the fire or its outcome, but its destruction did give Building Research Establishment (BRE) engineers an opportunity to examine the condition of the concrete and the metal ties. What they found was that some structural columns had suffered degradation and that some metal ties had corroded, caused by the use of chloride-based mixtures added to the cement in the concrete. This gave concern about the possibility of failure of the structural joints that held the houses together. A secondary problem was caused by flat roofs, which have a tendency to suffer from condensation, which can add the the corrosion of the joints.

This was the period when the government introduced the right for council tenants buy their homes. The status of Orlit homes as ‘officially defective’ meant that it was impossible for tenants to get a mortgage for them. The Housing Defects Act of 1984 (incorporated as part xvi housing Act 1985) was passed, giving owners the right to claim assistance to have the remedial works carried out to eliminate the defect.

A sample investigation into the Orlit houses in 1982/3 showed that the majority were in good condition, but at least two – nos. 25 and 27 Billson St – were not considered economically repairable and the council decided to replace them.

My dads family (Harris) moved into one of those Orlit houses in Billson Street (I think it was number 27) after they were bombed out of there house in Poplar. The house was then demolished in the 80’s – Lisa Kirby 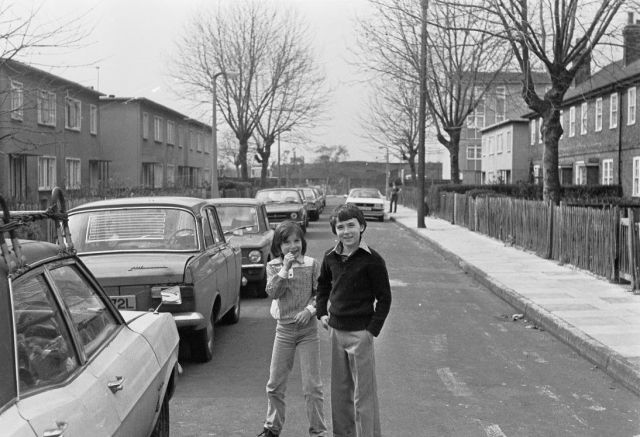 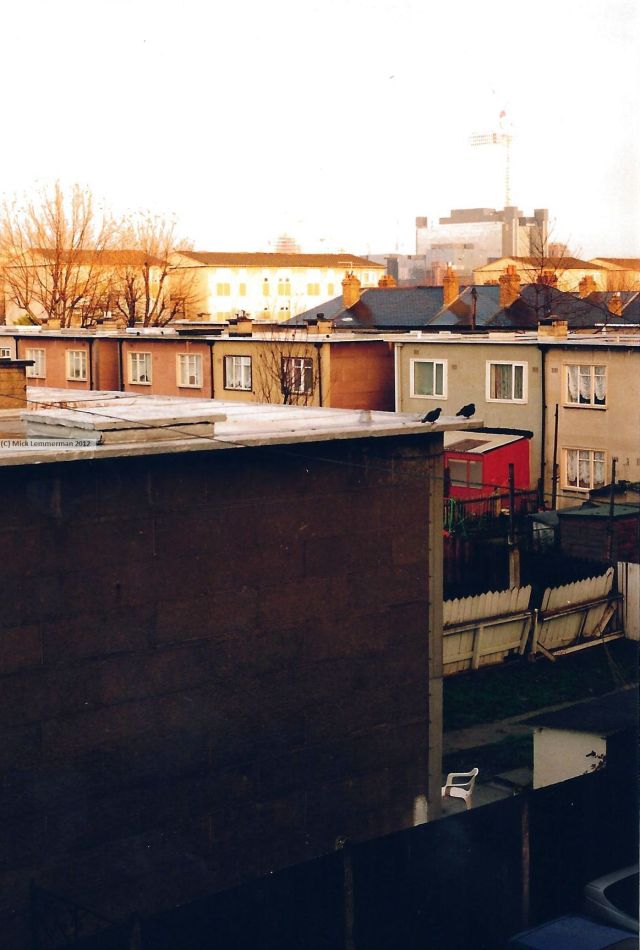 Rawalpindi House and almost all the Orlit Houses in the Tiller Rd area were demolished in the 1990s, but the houses in Parsonage and Billson St (apart from 25 and 27) still remain and are popular places to live. In spite of the construction problems,  residents of Orlit homes have (mostly) positive things to say about them.

I exchanged with Brenda. I went on to Milton Keynes, but wish I was still there – Susan Troy.

l remember seeing the POWs clearing the site and the houses being built and then we moved into one, thought it was heaven, it remained in my family until 2 years ago when my niece sold it – Margaret Stephens.

My dad was bombed out of Billson Street, his house was where Billson Street meets Manchester road where the flats are now, and then when I was 9 we moved back to Billson Street and we lived in Number 11. When my dad had the floorboards up to do a bit of plumbing work, he found an Italian coin, which we think was left there by one of the POW’s who helped to build them. Very cold houses in the winter, the metal window frames buckled every winter and the glass cracked and there was always ice on the inside. In the spring sparrows would get into the air vents to make their nests and we would wait to hear the chicks then pull the vents through from the inside so we could see them while the parents were off getting food. Have lots of good memories from there. – Pat Jarvis.

I lived in one in Mellish Street in the 80’s & they were well past their sell by date. I think they were never really meant to last, a quick way of providing homes to re-house people bombed out in the war. But a lot of people really liked them and enjoyed living in them – Con Maloney.

l remember the cold Orlit houses, would come home from work and could not unlock back door as it was frozen, had to wait for Dad to get home, when we got in the water taps were frozen, my Sister would sit with her feet in the oven. – Margaret Stephens. 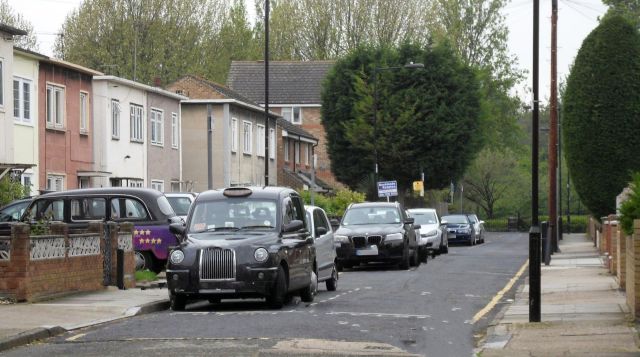 During the demolition of  25 and 27 Billson St in the 1980s, a late night operation by the Orlit Liberation Front was carried out in order to rescue one of the concrete cladding panels. This exclusive photo shows the operation in action. The faces of the activists are disguised in order to protect readers with a delicate constitution. 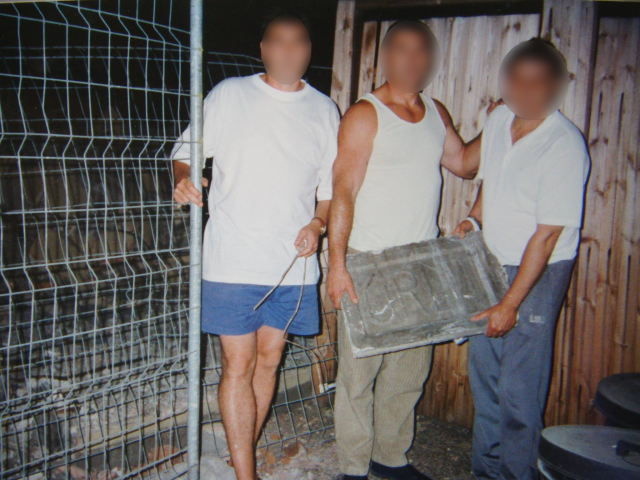 The rescued panel, after it had been cleaned: 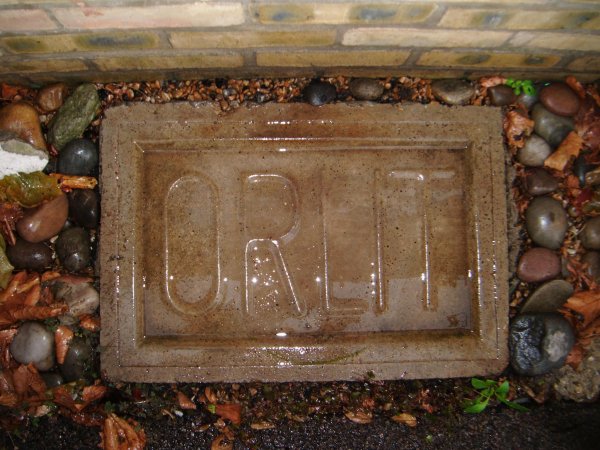 This entry was posted in Uncategorized and tagged Billson St, Orlit, Parsonage St. Bookmark the permalink.