The Medieval Road from Poplar High St to the Greenwich Ferry

Much of East Ferry Rd – known as Farm Rd to many Islanders – follows the path of one of the oldest roads on the Island, the road from Poplar to the Greenwich Ferry. The ferry was operating as early as 1450, and this 1745 map gives a good impression of the path of the road (more a dirt track, really) from Poplar. 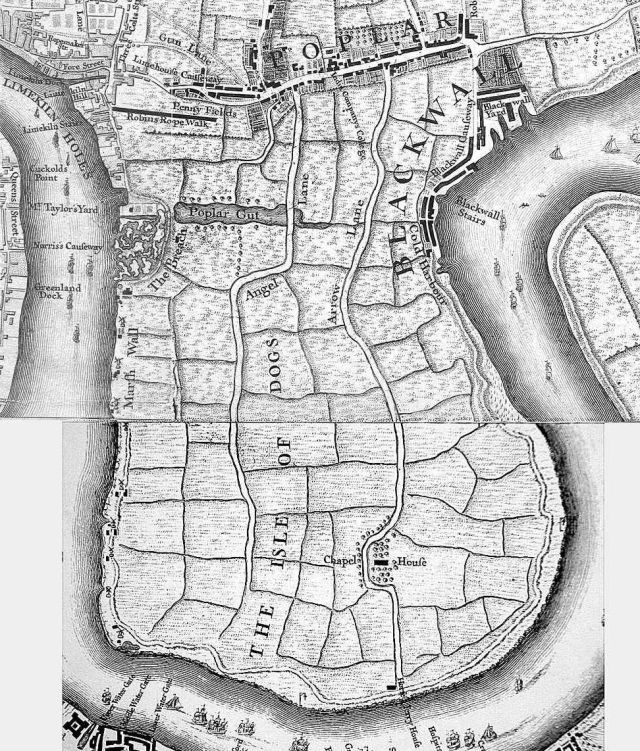 Arrow Lane – sometimes named King’s Lane or Road – was later more accurately spelled Harrow Lane (the name I’m sticking to). Probably the 1745 mapmaker wrote what he heard. This was not unusual – many place and street names were not written down before maps were created, and mapmakers had to use local or secondhand verbal knowledge to establish names. I have learned to treat early map information with caution; it would be the end of the 1800s before the Ordnance Survey made the first accurate and reliable maps. 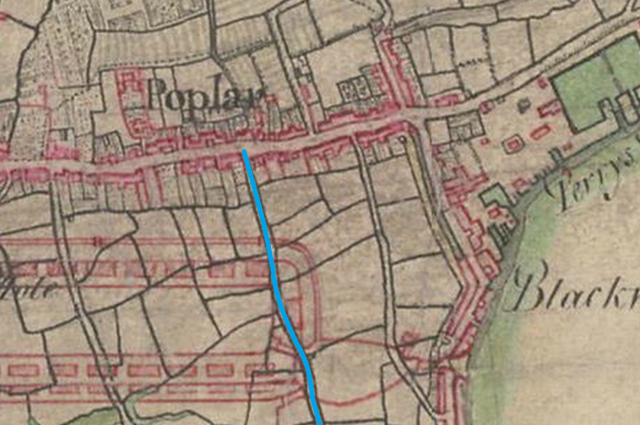 What the previous map also shows is a plan of the proposed West India Docks. The docks and the City Canal (further south) would cut Harrow Lane and other north-south roads in two. 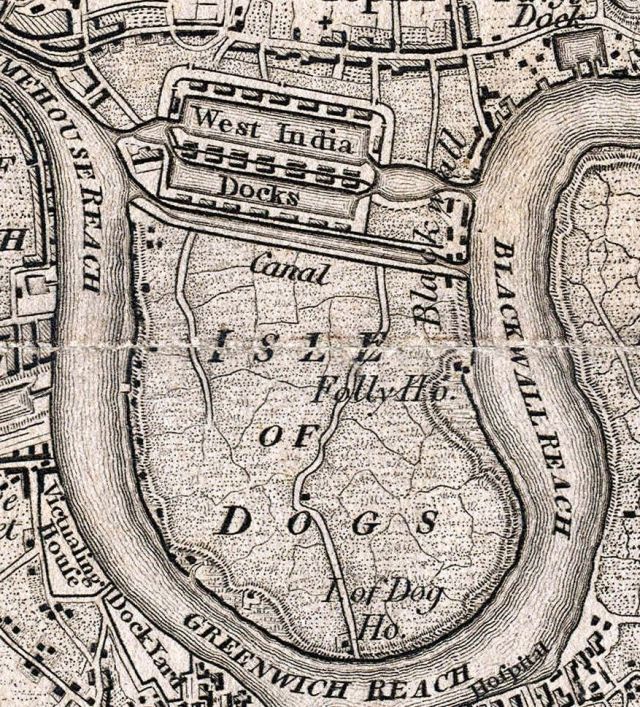 Leaving the north end of Harrow Rd (or King’s Rd) as a short street, providing access to the docks. 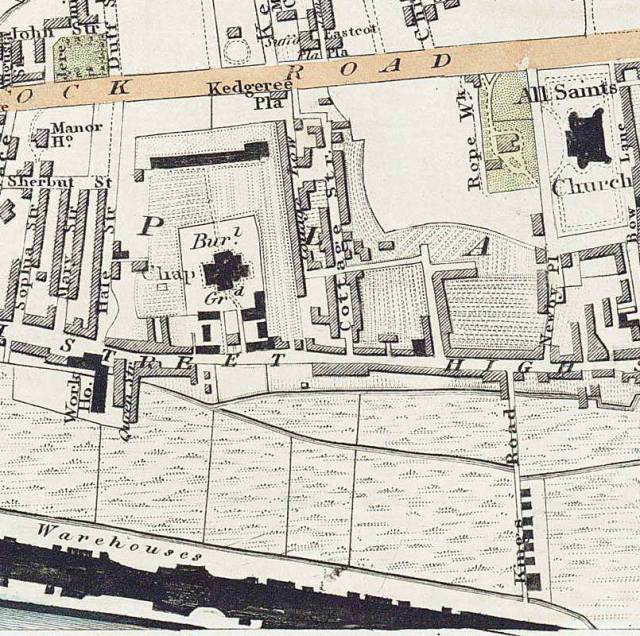 The corner of Harrow Lane and Poplar High St in the 1930s, showing the working men’s club housed in the old Harrow Lane railway station. 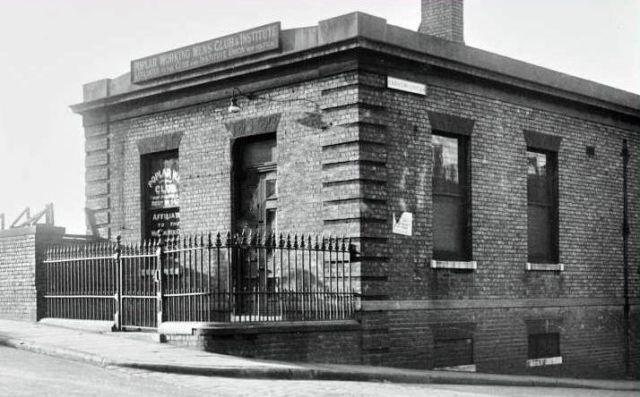 The same view today. Strange to think that this forgotten little road marks the start of a medieval path which wound its way to the ferry at the southern tip of the Island. 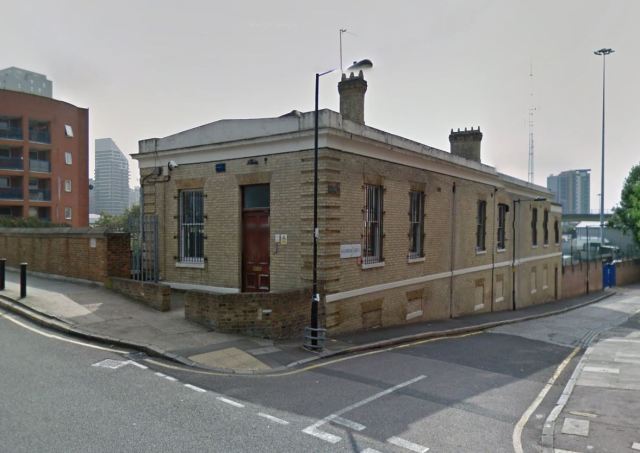 It is very obvious in these photos (by William Whiffin) why the High St was so named – it was higher than the more southerly marshland, providing a dry route along the north bank of the Thames. 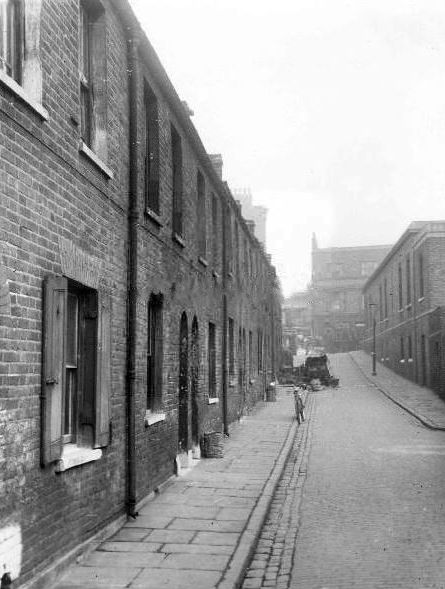 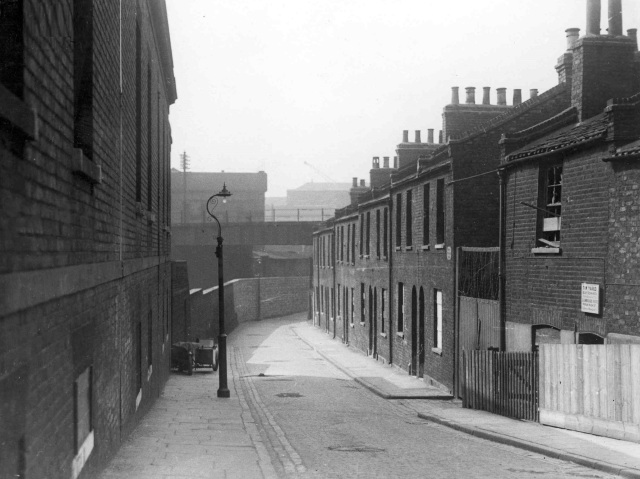 During much of the 20th century, there was a footbridge at the southern end of Harrow Lane, providing pedestrian access to the docks and Millwall Junction railway station. 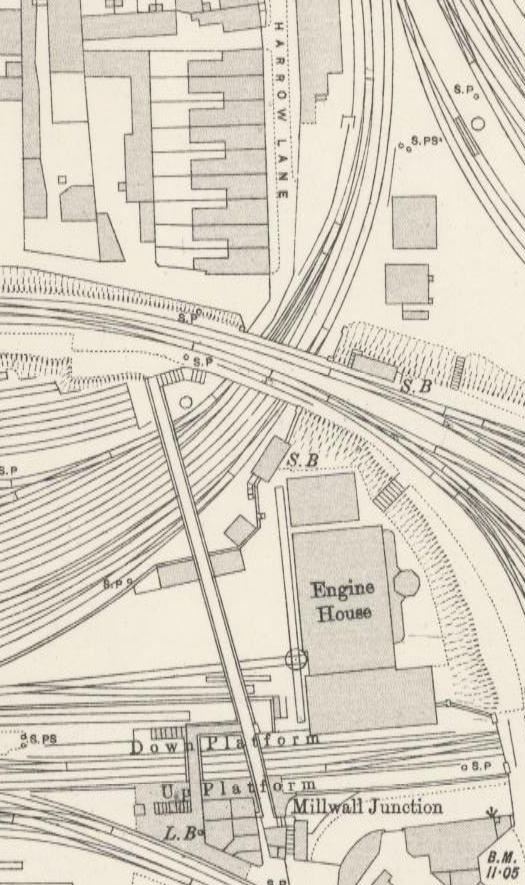 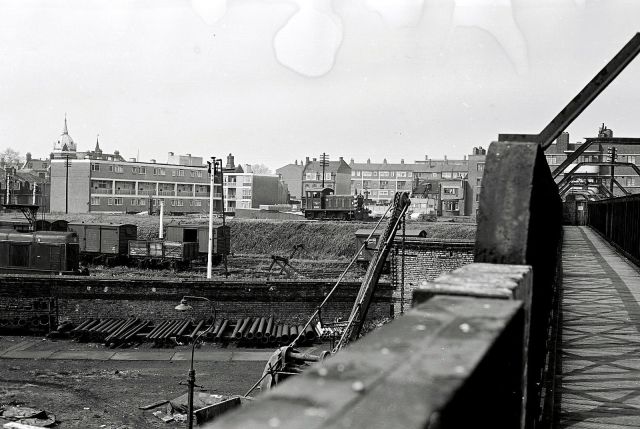 Looking south-southeast, the road leading away from the gate pillars towards the large crane is more or less following the old Harrow Lane path, a path that would be obstructed by the docks beyond the sheds in the distance. 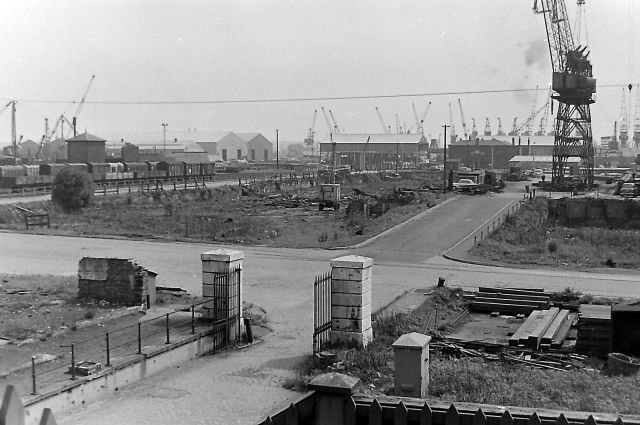 But, before the opening of the West India Docks in 1802, Harrow Lane ran more or less parallel with the Thames until it reached a point not far from the present-day George public house. From there, it twisted its way in a south-westerly direction towards Chapel House.

This British History Online map shows the situation in 1740. Dolphin Lane was in the west of the Island, another road which was bisected by the arrival of the docks and which still exists as a short side road off Poplar High St. The present-day Alpha Grove also follows a short stretch of the old path of Dolphin Lane. 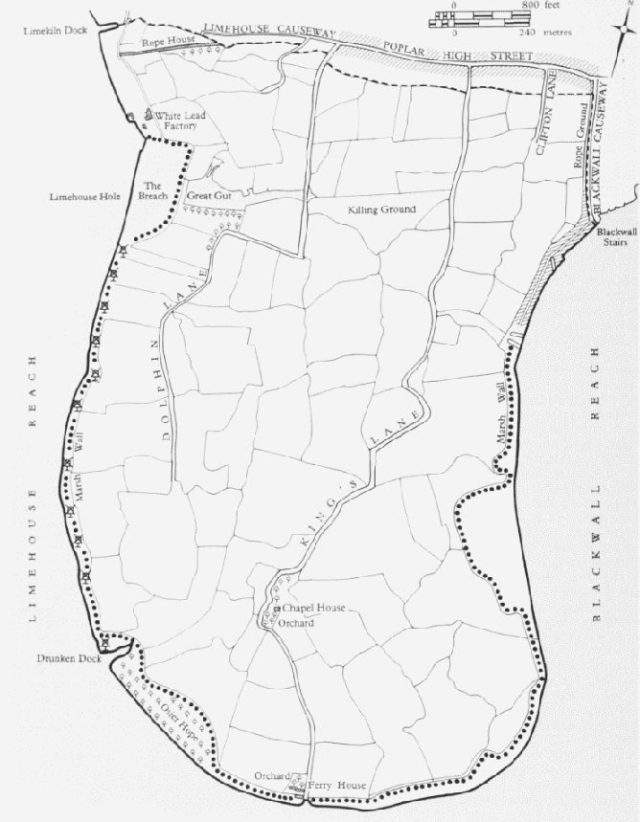 Superimposed on a modern map…. 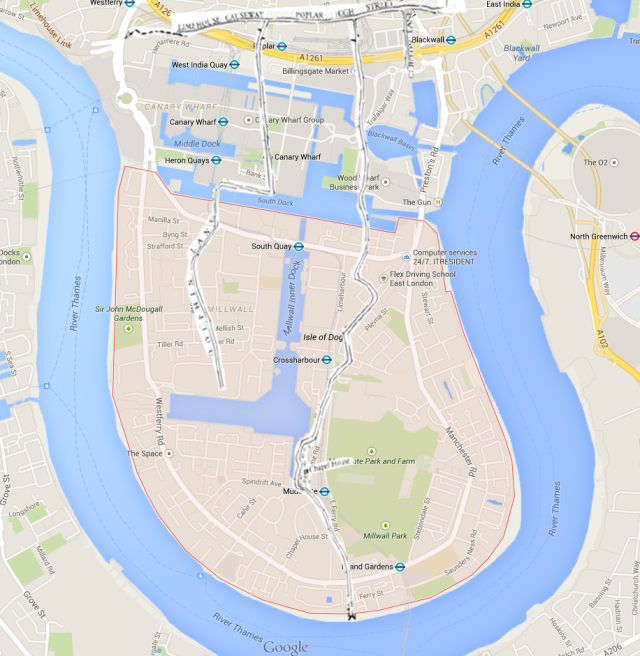 Don’t forget, for most of its ‘life’, Harrow Lane crossed marsh and pasture land with few inhabitants. This is an annotated extract of the view from Greenwich Hill painted by Hendrick Danckerts in 1670. 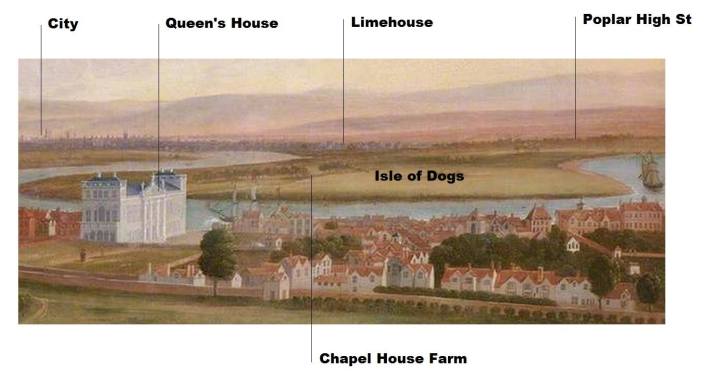 This late 1700s painting by David Cox shows the view across the Island (probably from somewhere close to the City Arms) to Greenwich during the construction of the West India Docks. 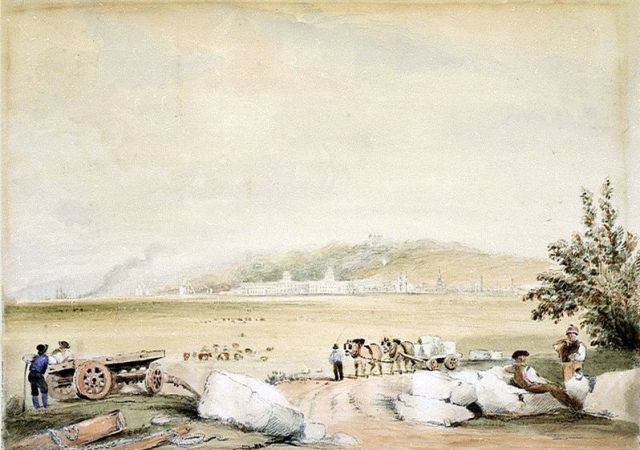 By 1860, Harrow Lane between the George and Chapel House was undoubtedly dealing with much heavier traffic than in medieval times, and was widened and straightened. 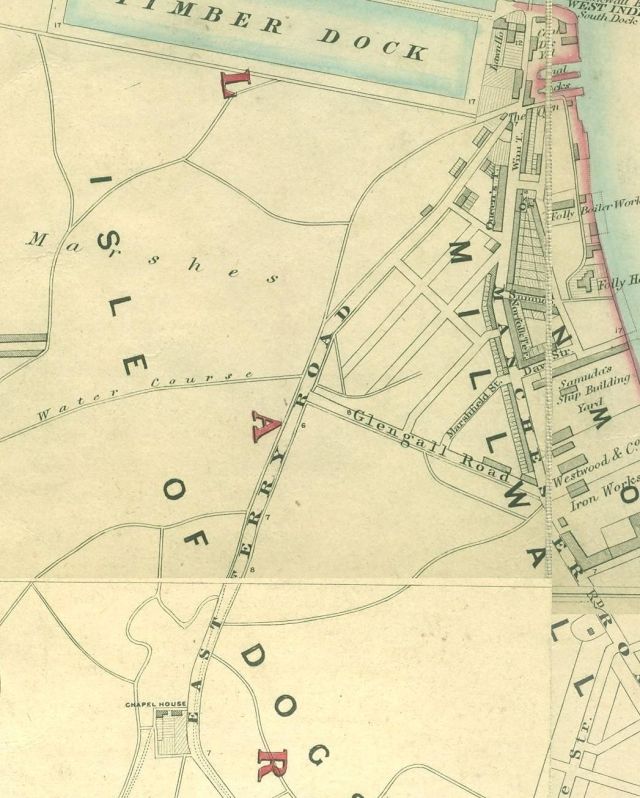 Chapel House was by this time a farm built on the site of the former St. Mary Chapel. British History Online:

The earliest reference to a chapel in the marsh dedicated to St Mary dates from 1380. This chapel may have been the old one, or perhaps a new chapel of ease had been erected for the marsh-dwellers: such a chapelry was founded in Stratford-at-Bow, Stepney, in 1311. The theory that it was an outpost of the Abbey of St Mary of Graces is founded on nothing more than the fact that the abbey owned land locally. Suggestions that it was a hermitage or penitent’s chapel are romantic guesswork.

When the chapel became a dwelling is uncertain, but the name Chapel House was in use by the late sixteenth century. Gascoyne’s 1703 map shows simply ‘the Chappell’; Maitland refers ambiguously to ‘the Chapel-house … the Ruins of a Stone Chapel’. Part may well have been in ruins, for in 1799, the owner, a Limehouse attorney, mentioned that a weather-boarded timber addition had been made to the building about 30 years before: this work appears to have involved the roofing-in of ruined stonework. By 1811 the building was a ‘neat farm-house’; a few years later the then occupier, a grazier and horse dealer, largely rebuilt it in brick on a long lease from William Mellish, afterwards making it into two dwellings. Two or three ‘mean and inconvenient’ tenements were later built on to it.

Remains of the chapel were still present on the construction of the Millwall Docks in the 1860s. 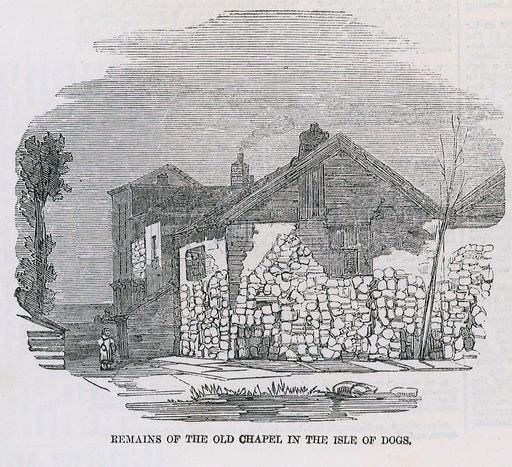 The remains were demolished during the construction of the docks. The site of the chapel is now mostly under the water of the former Millwall Dry (or Graving) Dock. 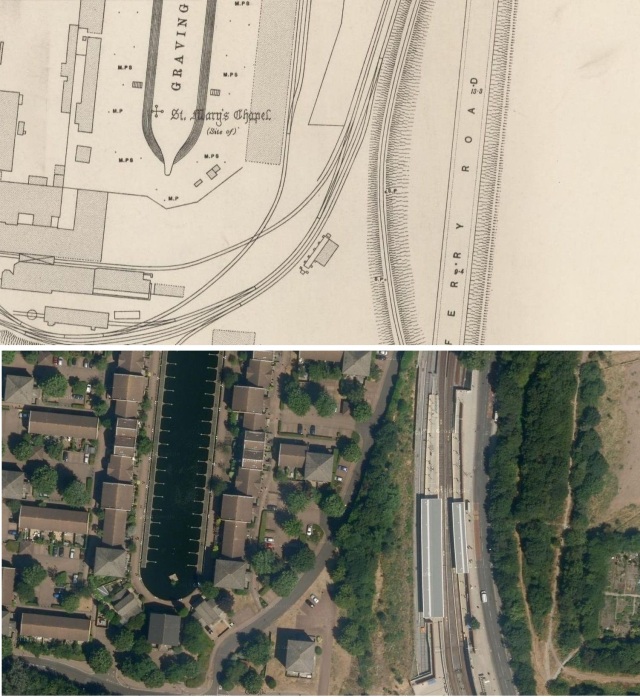 The former dry dock is now known as Clipper’s Quay. 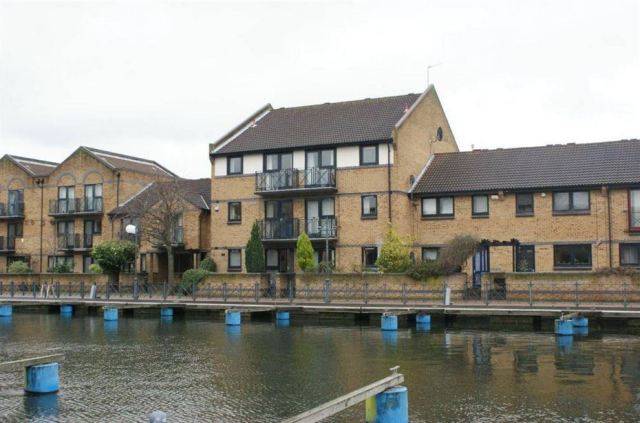 It never was a quay, but at least one clipper spent some time there being refitted, the Cutty Sark. 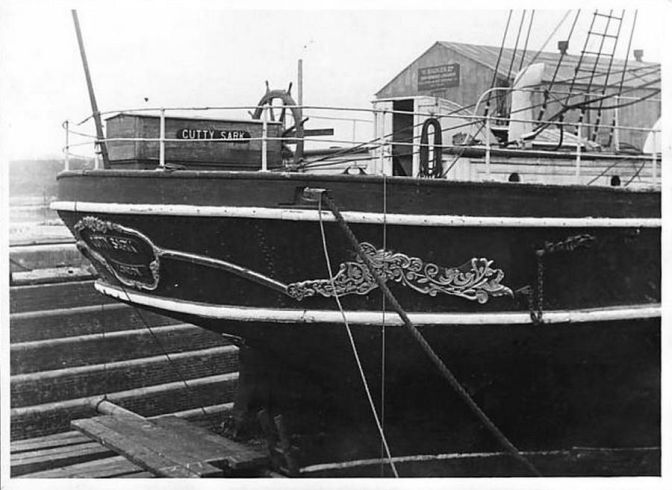 The shed behind the Cutty Sark, and on the left of the following photo, mark the site of St. Mary Chapel (the later Chapel House Farm). 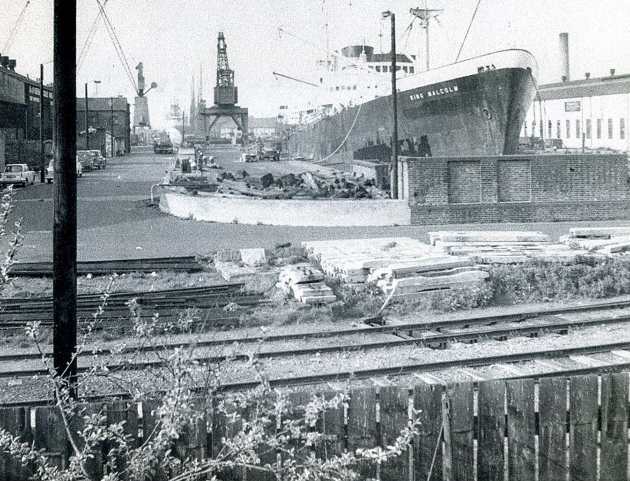 Harrow Lane would have passed close to the sheds on the right of the previous photo. However, the arrival of Millwall Docks meant that the road (by now a toll road named East Ferry Rd) would have to be rerouted again; further east. 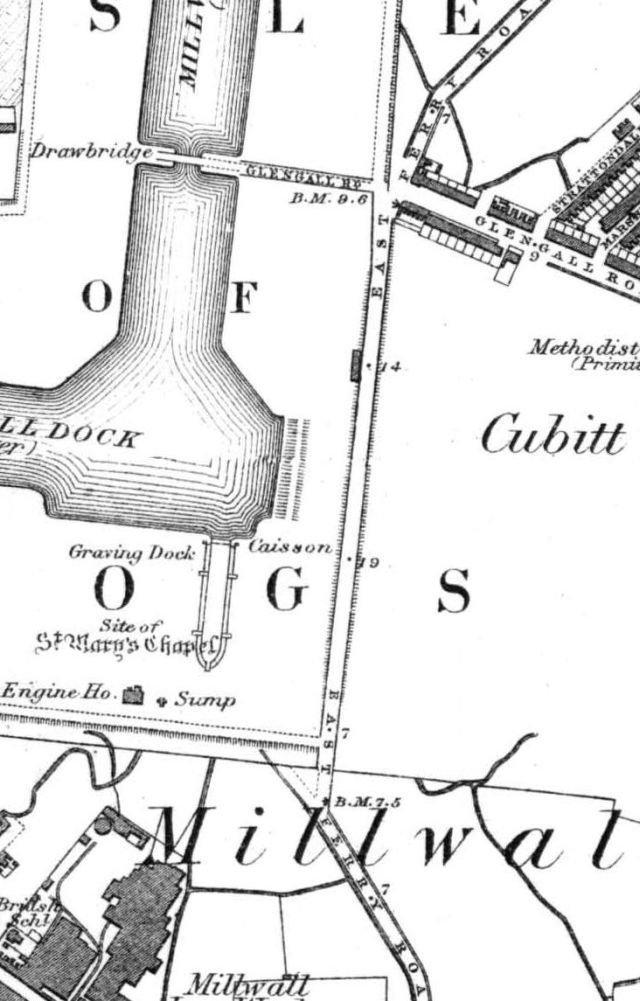 Looking south in 1970. ASDA would later be built on the land behind the fence on the left of this photo. St Mary Chapel was to the right of the fence at the top of the hill.

From its junction with Thermopylae Gate, East Ferry Rd, the road is of course wider and straighter than the medieval Harrow Lane, but closely follows its path.

Past the Lord Nelson at the junction with Manchester Rd and West Ferry Rd (1897 photo)….. 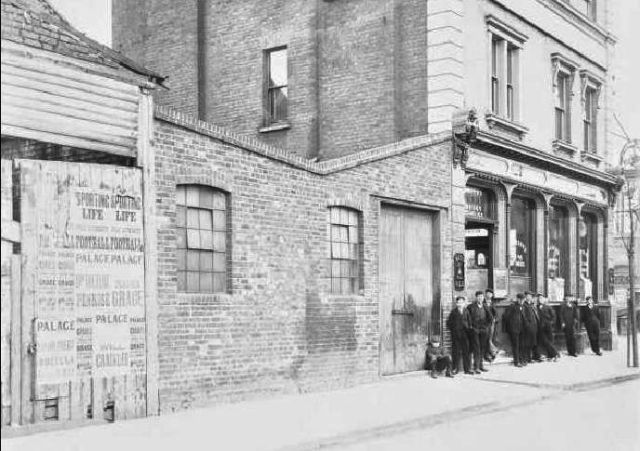 ….as far as the Ferry House… 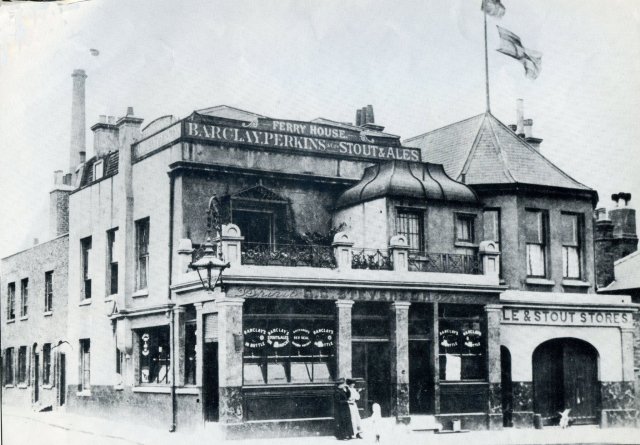 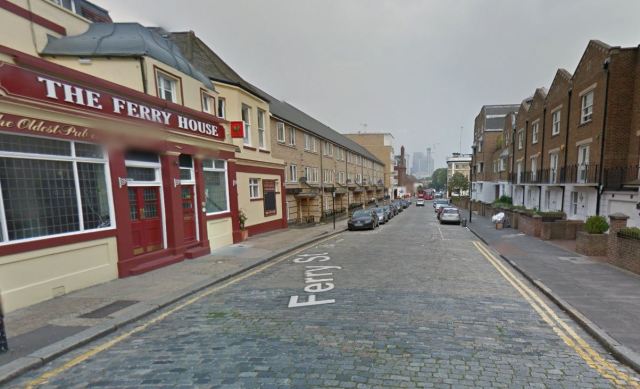 I’m saving the rich history of the ferry and the area around it for another article, but if you’re ever in East Ferry Rd, perhaps close to ASDA, why not take the time to stop and think about the past? This is the centre of the Island, geographically and historically.