Current and former residents may beg to differ, but – on the face of it – Billson Street is no more special than any other Island street. However, in some respects it does have a unique history: half the street was destroyed in the course of one night during World War II, and it was later chosen as one of the first locations for the construction of experimental, temporary houses known as ‘Orlit’ homes. The construction of these houses was well documented, and consequently there are a large number of high quality photographs of Billson Street taken just after the war. I wrote something about Orlits in this article, and some of the information and photos from that article are reproduced here, but this article is about the longer history of Billson Street.

The street was named after Jonathan Billson whose building firm was active during the creation of Cubitt Town in the middle of the 19th century. On the Isle of Dogs, the firm built 26 houses and one pub, the Builder’s Arms at 99 Stebondale Street, in the 1860s. Around that time, Billson seems to have got mixed up in all sorts of extra-marital shenanigans. I’ve read and re-read this newspaper article from the time, but I can’t really work out who did what and with whom…..

In 1870, Billson Street had been laid out, but had not yet been built upon. The street ran from Millwall Dock Company land in the west (later Millwall Park) to Wharf Road (later Saunder’s Ness Road) in the east. The pub at the end of Billson Street was the Builder’s Arms.

By 1895 more houses had been built on Billson Street, including two large houses close to the west end of the street. Across Manchester Road, opposite Christ Church School, was another large house, Perseverance House, with its own substantial yard.

Christ Church School was built in 1866 on church land north of the vicarage, mainly at the instigation of the first vicar of Christ Church, the Rev. William John Caparn. Faced with financial difficulties from the start (it was funded solely by public contributions), the school closed in the 1890s on the construction of Cubitt Town School close by. 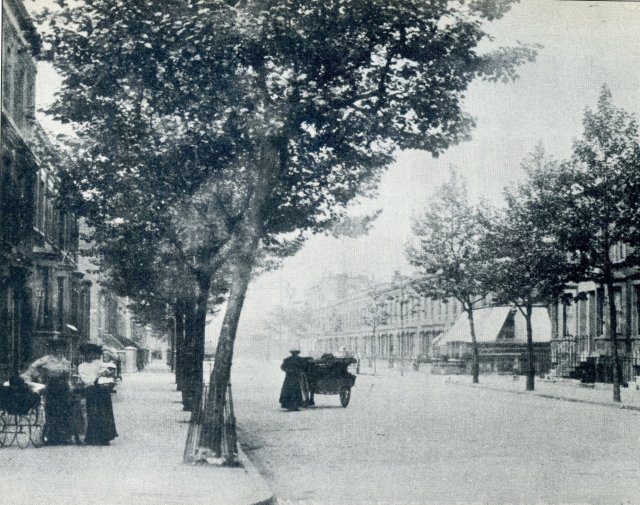 Manchester Road looking north in the 1900s. Billson Street is on the left and right in the centre of the photo. 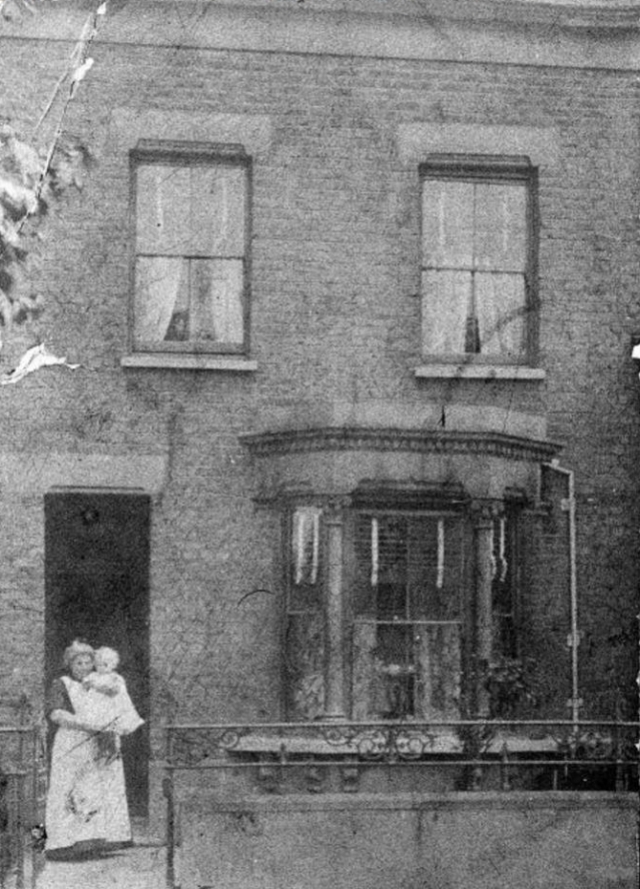 17 Billson Street in the early 1900s, a house destroyed during WWII. “Probably Granny Cooper who lived at No. 206 Manchester Road, and was one of the Island midwives.” Photo and text: Mrs. Mitchell / Island History Trust.

In 1920, parts of Billson Street, Parsonage Street and Stebondale Street and the whole of Kingfield Street had never built upon. Poplar Borough Council filled the gaps with houses intended to match the design of the ‘Garden City’ houses of the Chapel House Street Estate. The council named the loose collection of houses the Kingfield Estate.

28 Billson Street in the 1930s. Thomas Fitzgerald in his back garden. 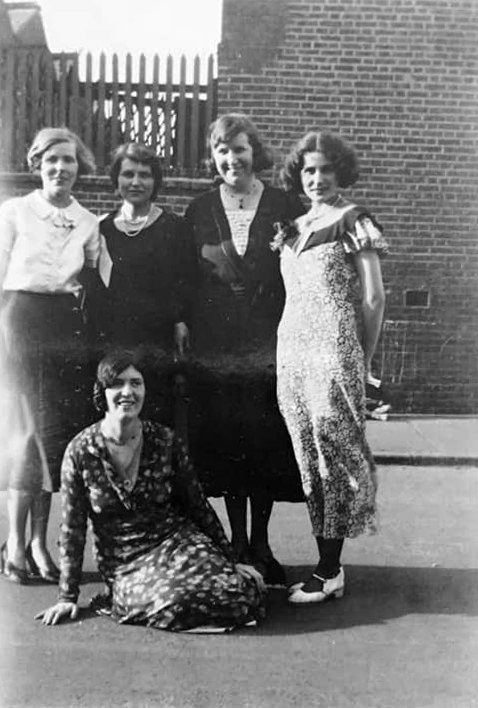 On the night of 19th to 20th April 1941, between midnight and 4:00, 58 bombs, mainly 50 Kg, fell on the East, West India and Millwall Docks. As usual, bombs also fell on residential areas. Heavy rescue worker Bill Regan noted in his diary:

We are out to Parsonage St, found a cluster of U.X.B’s between Parsonage Street and Billson Street, in the back gardens found the wardens and police, moving people out. Back to depot, out again to watch a parachute mine coming down, but it turned out to be a barrage balloon that had broken away. We chased it up Mellish St, grabbed the landing lines, and then wondered what to do with it. We decided to tie it to a lamp-post, and railings outside some of the empty houses, and along came a couple of soldiers with some of their young ladies, so we left them to deflate it and went back to the depot, just in time for another call out. A real mine had floated down and set off the 4. U.X.B’s. It took out all of Parsonage Street, all of one side of Billson Street, the other side was wrecked but not flattened, the Stebondale Street end, and the Manchester Road end, and parts of one side of Newcastle Street [Glengarnock Avenue] were totally wrecked, but parts still standing. We found a man clambering about, he said he stayed in his shelter thinking the four U.X.B’s would be safe for a while. He didn’t appear to be injured, and he wandered off. …as daylight came took photos.

Many were killed by the bombing that night:

And two died later of their injuries:

My father was born in Billson Street but by 1939 he had married and moved to East Greenwich. His uncle, Robert Inman, along with his wife Sarah (nee Coombs) and adult children, Alice and Nellie, still lived in No. 16. They were also bringing up the children of their deceased daughter Catherine, twins Catherine and William Everson, at the same address. Robert and Sarah later took these two young children to Wiltshire for safety.

During the night of 19th April, 1941, a large part of Billson Street was destroyed by a landmine. The bodies of Thomas and Alice were found the next day, in Seyssel Street. Albert Everson, probably uncle to the twins, also died at Billson Street.

Alice and Thomas were buried in a mass grave in what is now Tower Hamlets Cemetery.

My dad was born at 4 Billson Street in 1926 and lived there until they were bombed out at the beginning of the war, my dad was buried under the rubble with my granddad until they were rescued, his house would have stood where the sheds on the left of the “new flats” stands now, (facing Manchester Road), as we always called them. We moved back there when I was nine in 1968 and my mum and dad stayed there until 1996 when they retired to Wales. This is what remained of Billson Street after they were bombed. My dad’s uncle Herbert Spencer Reading had a shop in Stebondale Street just along from the pub with his wife Ivy, they had 7 children and Herbert was killed in active service during WW2, it’s a wonder anyone survived looking at these photos.

Bill Regan risked arrest and possible imprisonment for taking photos of the destruction. Such photos were forbidden not only because of their potential impact on morale, but also because they could provide Germany with intelligence on the results of their bombing. Fortunately for Bill, though, his photo rolls were developed by a policeman friend who had a dark room. The photos he took on 20th April show just how much damage was done…

The shaded areas in the following map shows houses which were either completely destroyed or damaged beyond economic repair (and thus were demolished) during WWII.

1945 aerial photo (RAF) showing the extent of the bomb damage to the area.

The numerous pits in Billson and Parsonage Street in the previous photo were dug to take the foundations of ‘Orlit’ houses. These were experimental, precast concrete houses which were employed to fill some of the gaps left by bombs in regular housing schemes. In 1945, German and Italian prisoners of war were drafted in to clear the sites, and construction commenced in November.

We lived in the middle cottage of the only five remaining houses standing in Billson Street (we were bombed out of Stebondale St). My nan sent big tin jugs of water over to the prisoners. She said they were some mothers sons, she had sons in the forces and if they were taken prisoner she would like to think someone would at least give them something to drink. Over the road in the Orlits I remember the Hales, the Mitchells and Davis rings a bell. My mum and me had to move out when my uncles were demobbed. I lived in a prefab at the end of the road when I was married. – Patricia Catherine Featherstone.

The following images are stitched-together screenshots from an Imperial War Museum film which features the construction and opening of the Orlit Houses in Billson Street. The large building on the left in the first photograph is the Builder’s Arms in Stebondale Street (it was badly damaged during the War and demolished in the 1950s).

The first house was opened in Feburary 1946 by George Tomlison, Minister of Works, and Charles Key, MP for Bow and Bromley, and at the time Parliamentary Secretary to the Ministry of Health. 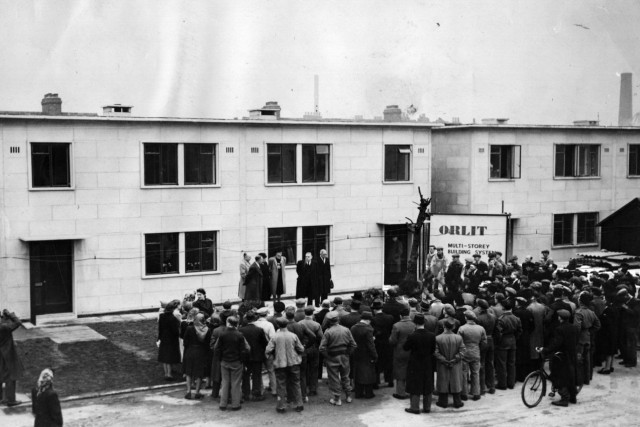 The first residents – the Atheis family at 16 Billson Street 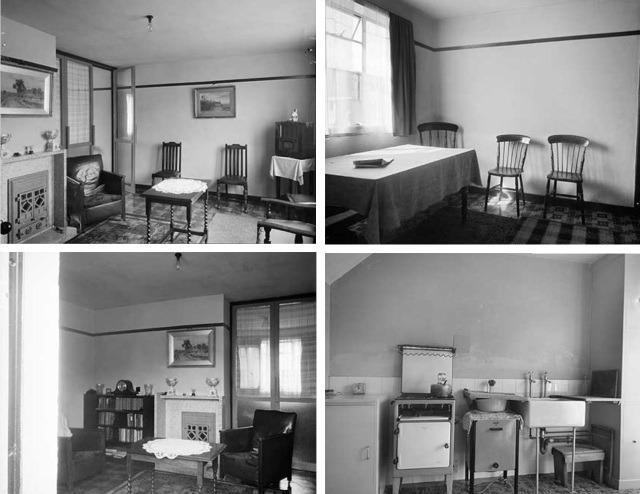 The Orlits were built and initially owned by the Ministry of Works. In 1951 Poplar Borough Council raised a loan for the purchase and ‘remedial measures’ for all Poplar Orlits. Weekly rents for the Orlit houses were eventually set at 21/- per week.

The following map was created in 1950. The gaps left by WWII bombing in Billson Street have been filled by Orlits, while prefabs were built along Stebondale Street and Manchester Road. The former Builder’s Arms at the west end of Billson Street is described as a ‘Ruin’. Across Manchester Road, the former Christ Church School was damaged but is still standing. Cubitt Town School was all but destroyed and needed to be largely rebuilt. 1964. The top half and sloped roof of the former Christ Church School in Billson street as viewed from the playground of Cubitt Town School. Photo: Extract of a photo by Malcolm Tremain

At the end of the 1960s, new flats were built in the area including along Manchester Road (our family moved into one of the blocks). These flats blocked road access between the two halves of Billson Street, and the eastern section between Manchester Road and Saunder’s Ness Road was renamed Glenworth Avenue.

1970s. The former eastern half of Billson Street, by now named Glenworth Avenue. The damaged former Christ Church School buildings – which would have been on the left of the street in this view – were demolished in the 1960s. A view of the rest of Billson Street is obscured by the lorry.

1970s. Looking in the opposite direction up Glenworth Avenue (former Billson Street). 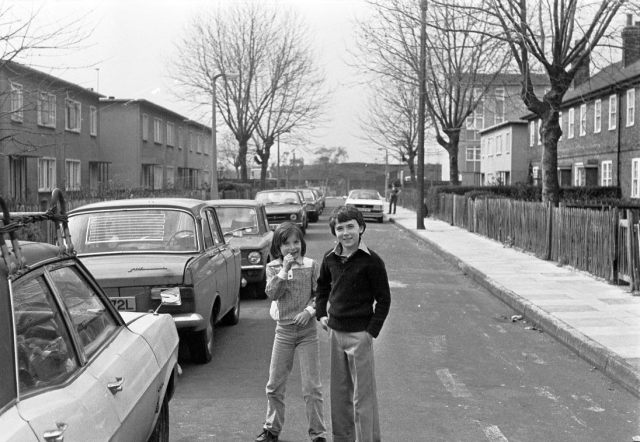 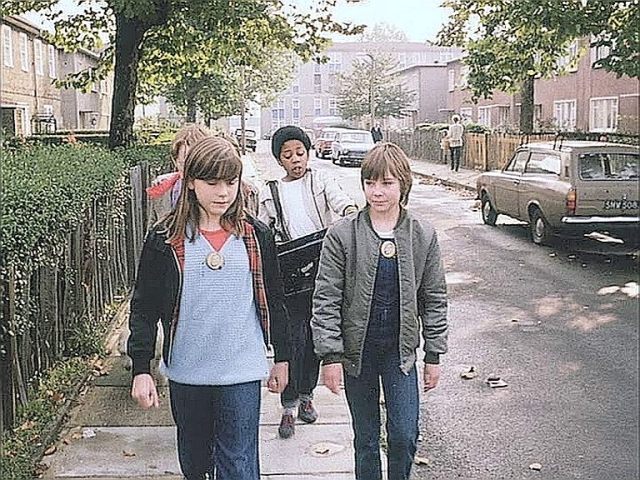 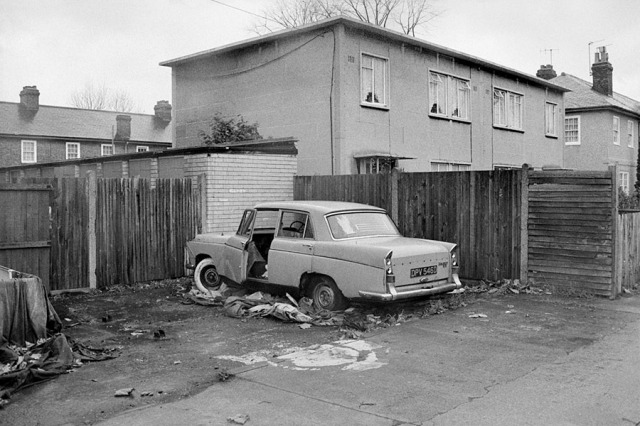 In the early 1980’s, a precast reinforced concrete house (not an Orlit) in Leeds burned down. Its method of construction did not in any way contribute to the fire or its outcome, but its destruction did give Building Research Establishment (BRE) engineers an opportunity to examine the condition of the concrete and the metal ties. What they found was that some structural columns had suffered degradation and that some metal ties had corroded, caused by the use of chloride-based mixtures added to the cement in the concrete. This gave concern about the possibility of failure of the structural joints that held the houses together. A secondary problem was caused by flat roofs, which have a tendency to suffer from condensation, which can add the corrosion of the joints.

A sample investigation into the Orlit houses on the Island in 1982/3 showed that the majority were in good condition, but at least two – Nos. 25 and 27 Billson Street – were not considered economically repairable and the council decided to demolish and replace them.

The site of Nos. 25 and 27 Billson Street after demolition. Photo: Pat Jarvis 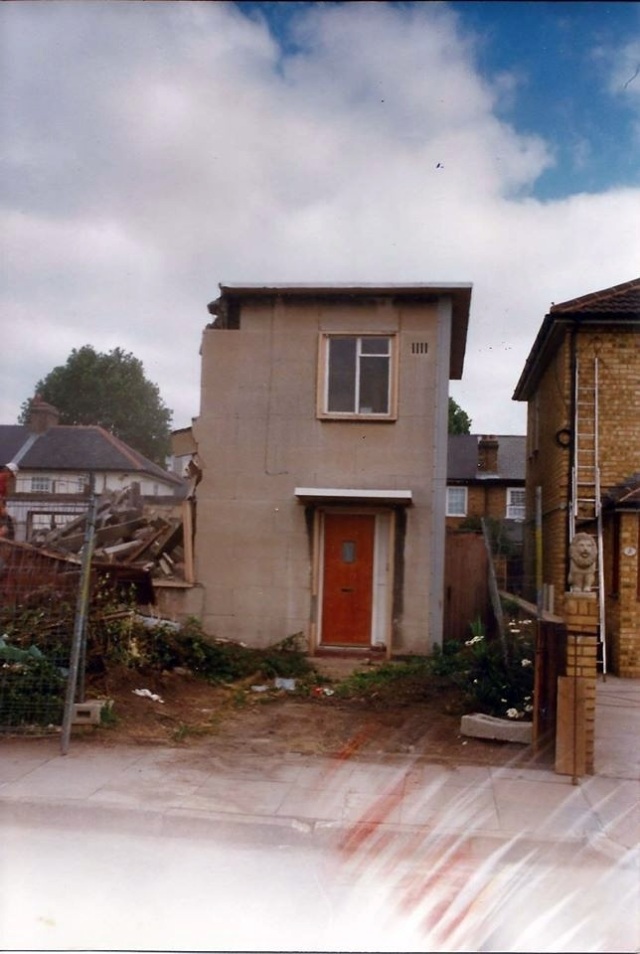 At the other end of the street, new homes were built on the corner of Billson Street and Stebondale Street.

Billson Street does seem to keep changing, but surely there is little room and few options for any more redevelopment ….. unless someone manages to squeeze in a tower block somewhere……